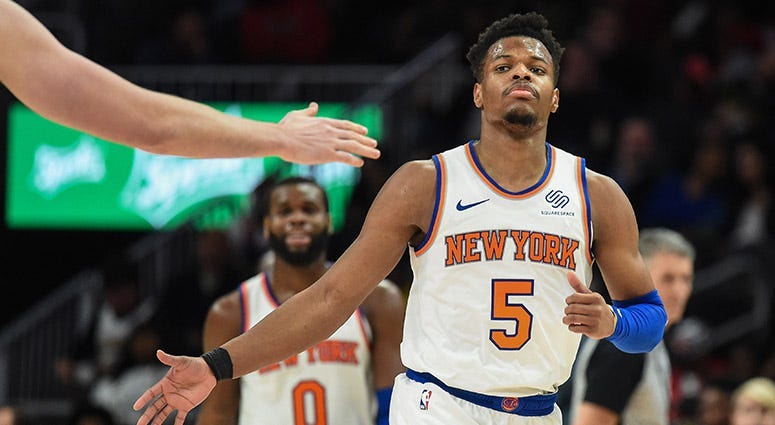 As the Knicks hit the All-Star break, they’ve played enough games with their newly acquired players to have a clear vision of exactly what they bring to the court. Let’s take a look:

Smith is the most important player the Knicks acquired in the past few weeks and is probably the best asset they’ve traded for since their Tyson Chandler trade back in the summer of 2011. Smith is a former top ten pick that’s still on his rookie contract and has already shown enough flashes to show he could become a good starting point guard in the NBA.

Smith’s physical gifts are impossible to miss. He is 6’3 and 195 pounds with the explosiveness to get to the rim almost whenever he wants. Once he gets there, he can jump off of one leg, use his strength, elite leaping ability, balance and body control to absorb contact and still finish at the rim. He has the potential to be an elite level penetrator and finisher. His career 60% FG within three feet of the rim (according to Basketball Reference) is an indicator those skills are real.

Since coming to the Knicks, he is taking a career-high 43% of his shots within three feet of the hoop. He is also averaging 6.3 free throw attempts per game, more than twice the number he averaged with the Mavericks. Those numbers are skewed by his 19 free throw attempt game against the Pistons, but even if you take that game out he is still averaging more than four per contest, which is an improvement over his time with Dallas.

Smith has also shown strong court vision. His alley-oop passes to both DeAndre Jordan and Mitchell Robinson have been a weapon to create easy baskets. He has also whipped some impressive cross court passes to open players behind the three point line. He is averaging six assists per game as a Knick, which would be a career high. His passing is still a bit inconsistent, but the ability is there.

Inconsistency still plagues many parts of Smith’s game. Despite the impressive numbers above, there are still times where he seems to be passing up opportunities to attack the paint to create shots for himself or others. It’s something that showed up at NC State, where there would be stretches of games where he seemed to glide along instead of maintaining an attacking mentality. With a Knicks team that has few other scoring options, Smith should have the green light to be attacking at all times.

In other instances, Smith doesn’t seem to embrace opportunities to draw contact and draw fouls. It’s fair to ask whether that hesitance has to do with his struggles as a free throw shooter. In Dallas, Smith shot just under 70% from the line, but as a Knick that number has plummeted to just under 55%. He shot only 3-8 from the free throw line against the Hawks. It might be in his head.

The hitch in his shot, which likely also contributes to his free throw problems, is something else the Knicks will have to work on with him in the offseason. There is a small hesitation in the middle of his shooting motion that will likely prevent him from ever becoming an elite shooter, unless he gets it out of his shot, which is possible.

The other two things he needs to work on is shot selection and decision making. He will still take the occasional low percentage long two, or contested jump shot. He will also sometimes be lackadaisical with the ball on some of his drives. These are common issues for a young ball handler, and there’s no reason to think they cannot be addressed.

The bottom line is that Smith is the best young point guard prospect the Knicks have on their roster and in the organization since Rod Strickland. (I’m not counting Marbury since he was acquired on his second contract.) He has all the physical tools to be a very good scoring point guard, with weaknesses that are correctable. With the Knicks lacking other scorers he has a real chance to grow in the final 25 games of the season.

Jordan’s best value seems to be as a mentor to Mitchell Robinson, who has shown improvement since his arrival. As a player, he is no longer the Defensive Player of the Year Candidate he was earlier in his career. He isn’t mobile enough to switch onto guards and can often be out of position as a help defender.

Offensively, Jordan has shown flashes as a passer out of the high post, and he can still finish around the basket. He could still be a useful roleplayer in the NBA, but his days as a thirty minutes a night starter at center are likely over. With the emergence of Robinson, re-signing him in the offseason should not be a consideration.

Even though Allen didn’t arrive in the Porzingis trade, he was added as a two-way player once Allonzo Trier was given a NBA deal. Allen has shown enough for the Knicks to consider him as potential long term depth at the point guard position. He gives good effort on defense, can penetrate, and thinks pass before shot.

He is not a top-end shooter, though he has made 50% of his threes so far with the Knicks and has been accurate from mid-range. Depending on how the summer goes (and the rest of Allen’s season), he could be a valuable low-cost add as a backup point guard that can be a glue-type player off the bench.

Jenkins best skill, shooting has been on display in his two games with the Knicks. He shot over 40% from behind the arc at Westchester. He lacks athleticism, but the Knicks can use his shooting as a weapon the rest of the season.

You can follow me on twitter at twitter.com/Schmeelk and subscribe to my new podcast The Bank Shot, which can be found on Itunes here: https://t.co/kmPo2AFAhZ  or on radio.com or other Podcast platforms. You can also listen to my latest episode with Brian Mahoney of the AP on wfan.com here: https://t.co/9PgoCPsVfw