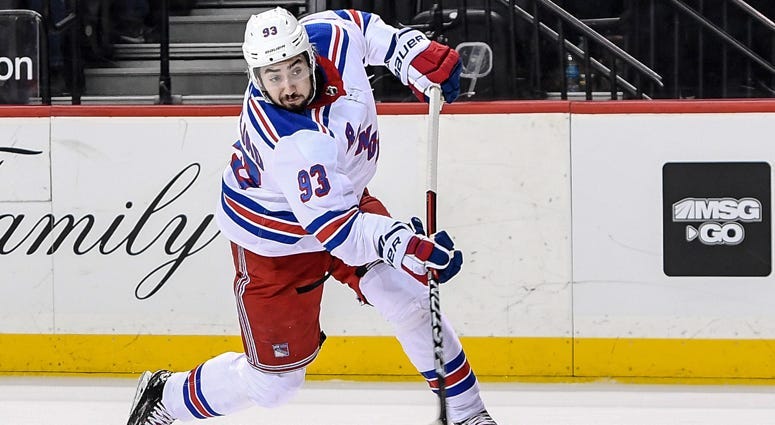 Every deal struck by NHL general managers include some form of risk. When the Rangers acquired center Mika Zibanejad in the 2016 offseason, GM Jeff Gorton parted with a finished product in Derick Brassard for the promising upside of Zibanejad.

The Brassard-Zibanejad swap has served as the prototype for future Gorton deals. By trading away a prime-aged Brassard, who had a track record of strong playoff performances, there was certainly risk, but the possible reward brought by the all-around potential of a younger Zibanejad made it a gamble worth taking.

Zibanejad’s rise and Brassard’s decline is clear to see through bottom-line statistics and the eye test. While Brassard’s points-per-game average has dipped below his 0.69 standard with the Rangers, Zibanejad has upped his average in each of his initial two seasons as a Ranger. The 24-year-old Swede is clicking at 0.68 points per game this season, while Brassard has posted 0.64 points per game in combined duty with the Ottawa Senators and Pittsburgh Penguins.

Having been acquired by the back-to-back Stanley Cup champion Penguins ahead of the trade deadline, Brassard is being counted on to be part of the puzzle rather than the high pressure that was piled on him in Ottawa and New York. Brassard is an 0.55 points-per-game center since departing the Rangers, though part of that is due to playing in Guy Boucher's defense-first system with the Senators.

MORE: Hartnett: Rangers' Chris Kreider Picks Up Where He Left Off Before Blood-Clot Scare

The Penguins have shaved three minutes off Brassard’s nightly workload. His greatest attributes have always been his offensive instincts and clutch goal scoring. He is not a complete, all-around center. The 30-year-old lacks consistency on the defensive side of the puck, but he has his merits. Perhaps, in a less intensive role against favorable matchups, Brassard can play a role in helping the Penguins to a three-peat.

Meanwhile, Zibanejad is blossoming into an all-situation No. 1 center before the age of 25. He has posted a 0.67 points-per-game since joining the Rangers. Zibanejad plays a true, 200-foot game and makes valuable contributions on the power play and penalty kill. He is expected to be a core member whom the Rangers will lean heavily on for years to come. Gorton predicted great things to come from Zibanejad when he acquired him from Ottawa in July 2016. He might be outdoing expectations.

“For us, this is a younger player that’s coming off two 20-goal seasons, that we think is heading to the prime of his career,” Gorton said at the time. “And the ability to get a younger player, to get a guy that’s fast, big, plays real well in his own zone, can do a lot of things for us, that’s the exciting piece.

“I think the potential is there for more upside,” he continued. “He’s just scratching the surface at age 23. There’s not a lot of guys that have done what he’s done, as far as score 20 before that age. You look at the way the game’s played. You look at some of the things -- he kills penalties, he’s really emerged on the draws. I think since he’s come in he’s gotten better every year.”

Those upward trends have continued year by year, and the high upside has been flexed by Zibanejad in recent games. He extended his goal-scoring streak to four games to even his career-high during Thursday’s 4-3 defeat to the Philadelphia Flyers. Zibanejad also extended his points streak to six games (seven goals, three assists over the span) and has registered 13 points (nine goals, four assists) over his last 10 games.

The Rangers’ rebuild will be accelerated if Gorton can continue gaining young, growing assets that hit their peak around the same time. You can see the pattern that has followed in Gorton’s key dealings. He moved Derek Stepan and Antti Raanta to the Arizona Coyotes last summer to gain promising puck-moving defenseman Tony DeAngelo and the seventh overall pick in the 2017 draft, which was used to select versatile center Lias Andersson.

After the Rangers turned sellers ahead of the 2018 trade deadline, the multitude of deals completed by Gorton echoed this strategy. Time will tell if the youth movement will pay off down the line in the form of a faster and highly skilled Rangers team that can eventually compete at the top of the Eastern Conference.