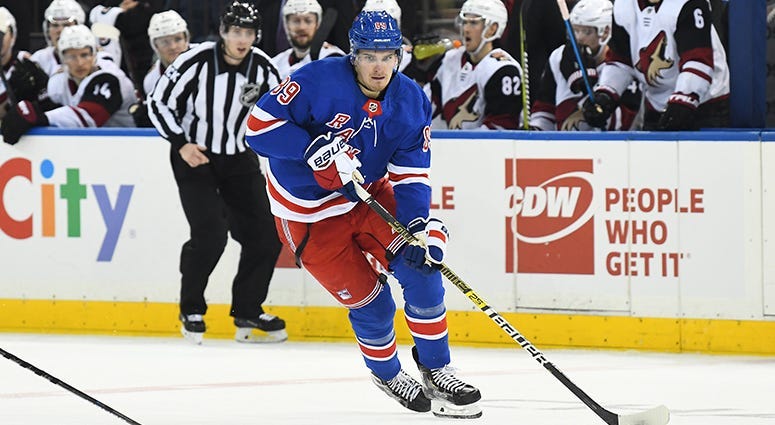 Time is running out for Pavel Buchnevich to prove his worth to the Rangers. The former third-round pick arrived at The Garden amid plenty of fanfare in 2016 after impressive displays in the KHL. So far, he’s only shown intermittent flashes of being a first line talent for the Blueshirts.

More than halfway into his third NHL season, Buchnevich is yet to stake his place as a regular on the top two lines and he’s struggled to fully impress each of his head coaches. Former head coach Alain Vigneault and current bench boss David Quinn have attempted to send strong messages to the 6-foot-3 wing through banishments to the fourth line and healthy scratches.

It was understandable why the veteran-leaning Vigneault was hesitant to offer Buchnevich consistent minutes on the top scoring lines during the Russian’s first two seasons. The NHL is a prove-it league and Vigneault wasn’t just going to give away major minutes to a raw, unproven talent – especially in Buchnevich’s rookie season as the Rangers chased and earned Wild Card playoff berth.

Buchnevich was able to suit up for 74 games in his sophomore season – but his ice time was limited until the Rangers began trading away veterans at the 2018 trade deadline. Furthermore, there were communication issues that led to Buchnevich not understanding why he was being scratched or paired up with a rotating cast of linemates. During Vigneault’s five-year stay at The Garden, his communication with the dressing room was often distant and detached.

This past offseason, the Rangers chose to replace Vigneault with David Quinn, an up-and-coming coach with a track record of developing some of the college hockey’s finest prospects into bona fide NHL stars and had earned a reputation for being a clear and effective communicator.

Yet, here we are again in a situation where Buchnevich has played his way out of the lineup. On Tuesday, Quinn took a drastic measure by scratching Buchnevich and opting to dress seven defensemen and 11 forwards. Quinn stated: “I don’t love playing seven ‘D.’”

The Rangers fell to the rival Philadelphia Flyers, 1-0. Buchnevich was a healthy scratch for the fourth time this season. The Blueshirts sorely needed Buchnevich’s skill on a power play that went 0-for-2 – but maybe Quinn’s thinking is that in the long run, the loud and clear message that was sent could be the wake-up call needed for Buchnevich to realize his full potential.

Through 32 games, Buchnevich has recorded nine goals and six assists – though it should be noted that he’s spent much of the season skating on the fourth line with Cody McLeod on the left wing and either Brett Howden or Boo Nieves as his center.

Howden suffered a knee sprain in Tuesday’s loss and will be re-evaluated on Wednesday. Perhaps, the injury will allow Buchnevich to slide back into the lineup for Thursday’s road game against the Devils. Mats Zuccarello is day-to-day due to a foot infection. If Zuccarello is unable to return, Buchnevich could dress on Thursday.

Buchnevich needs to make good on his potential sooner rather than later. You only get so many chances to impress a coach and an organization. Some prospects develop later than others, but Buchnevich will turn 24 in April. If he doesn’t figure out how to be an effective and committed two-way forward soon enough, there will be a pack of younger prospects ready to steal his place in the Rangers’ lineup.

The history books are littered with high-potential forwards who never quite made the grade in the NHL and disappeared quickly. Pavel Brendl, Patrik Stefan, Alexandre Daigle, Alexander Svitov, Kris Beech, Nikita Filatov and Jimmy Sheppard to name a few and those guys were all lottery picks.

Talent can only get a player so far and there’s a slim window for prospects to prove themselves in this league. Before you know it, that chance is gone. Buchnevich should hear Quinn’s latest message loud and clear – and he better start working his butt off like there’s no tomorrow.