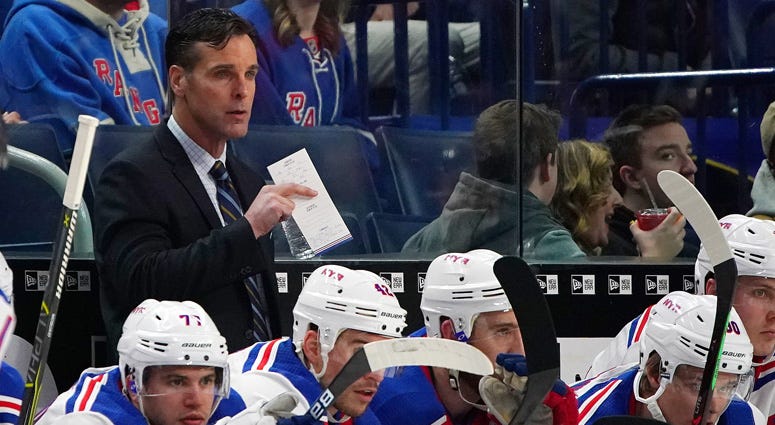 Through 69 games, the Rangers have proven to be a club with an unquenchable competitive fire that often results in come-from-behind, overtime-forcing efforts. Having a group of players who give maximum effort is a great attribute – but it’s only part of the equation.

At the moment, coach David Quinn is summoning the most out of the talent at his disposal. Anyone who has studied the Blueshirts closely can ascertain that this team follows Quinn’s blueprint of committed, high-intensity hockey to a T. It’s a world of difference compared to the disconnect that former coach Alain Vigneault experienced with his players in the final months of his Garden reign last season.

Quinn passed the buy-in test early this season. He commanded immediate control of the dressing room by holding each and every player accountable for any hint of complacency, repeated on-ice mistakes or dialed-back efforts.

Talented wing Pavel Buchnevich was healthy-scratched from the lineup on four occasions, the latest coming in late January. The message sent to the 23-year-old was heard loud and clear. Buchnevich finished February with nine points in 13 games. Smooth-skating defenseman Tony DeAngelo was scratched for the final game of January and the opening game of February. The 23-year-old blue liner responded with 11 points in 12 February games played.

DeAngelo was a healthy scratch for Monday’s 3-2 overtime defeat to the Edmonton Oilers. Quinn cited a “small reason” led to his removal from the lineup in Edmonton. The 52-year-old head coach is going to continue to hold his players to a high standard and no one is safe from the doghouse if his execution dips or efforts fizzle. There isn’t any playing of favorites, there are no scapegoats – there’s just a simple message: If your play slips below what’s acceptable, someone else is going to take your place in the lineup and you’re going to have to earn your way back into Quinn’s good graces.

The 28-28-13 Rangers lead the NHL with 13 overtime/shootout losses and have lost nine straight games decided by overtime. This team battles, scraps and claws – sometimes that’s not enough. The addition of effective pest Brendan Lemieux has upped the energy and pace that the Rangers play with.

A winning team is able to conjure the right mix of talent and character across four lines, three defensive pairings and in net. At this point, the Rangers are like an uncompleted painting. You can see part of the image forming, but there’s still plenty of work ahead before we see what the finished article looks like.

General manager Jeff Gorton will need to make masterstrokes at June's draft and future drafts to come while pursuing free-agent and trade targets that can push the Blueshirts closer to playoff contention. That’s the hard part. Overseeing a rebuild isn’t easy.

But step one of the rebuild was appointing a coach with the ability to inspire a group of men to dig deep and demand more from themselves and each other. The Rangers have that leader in Quinn, and it’s going to be interesting once he’s handed an improved roster that is capable of pulling out victories to replace the narrow losses of this season.