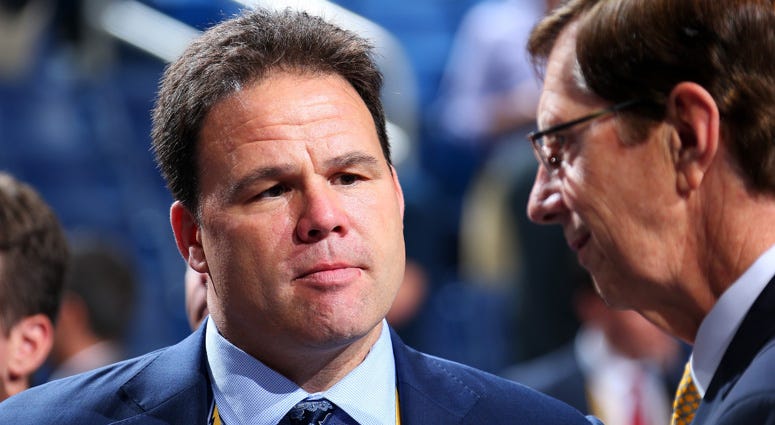 Rangers general manager Jeff Gorton has a crucial summer of work ahead of him, though this situation isn't new to the 50-year-old executive. Back in 2006, Gorton served as interim GM of the Boston Bruins following the firing of predecessor Mike O’Connell in March.

Prior to his dismissal, O’Connell signed off on one of the worst trades in NHL history by sending star center Joe Thornton to the San Jose Sharks for Marco Sturm, Wayne Primeau and Brad Stuart. The Bruins finished the 2005-06 season 13th in the Eastern Conference with a 29-37-16 record. It was Gorton’s task to pick up the pieces and make the big calls.

The 2006 summer changed the course of Bruins history. Gorton’s decisions pushed Boston in the right direction, eventually culminating in a 2011 Stanley Cup championship.

One day before the 2006 draft, Gorton fleeced the Toronto Maple Leafs by swapping goaltender Andrew Raycroft for a young prospect named Tuukka Rask. The Finn would establish himself as one of the league’s best performing and most consistent netminders, while Toronto bought out Raycroft’s contract in 2008.

Crucially, Gorton used the B’s picks wisely. Milan Lucic was grabbed with the 50th overall pick in the second round and Brad Marchand was selected in Round 3. Though Gorton drafted Phil Kessel with the fifth overall pick, Gorton’s successor, Peter Chiarelli, later dealt Kessel to the Maple Leafs for a first-round pick that allowed Boston to select Tyler Seguin. As a rookie, Seguin produced during his first playoffs and helped the Bruins raise Lord Stanley’s Cup.

Kessel later got to lift the Stanley Cup twice as a member of the Pittsburgh Penguins.

Gorton made two big splashes on Day 1 of free agency, adding all-world defenseman Zdeno Chara and assist-machine center Marc Savard. His stint as interim GM would end 14 days later. The Bruins hired Chiarelli as permanent general manager, and Gorton was assigned to his previous role as the club’s assistant GM.

The Rangers hired Gorton initially as a pro scout in 2007. He became a rising star in the Rangers’ organization, climbing to assistant director of player personnel, then becoming assistant GM and finally succeeding Glen Sather as general manager in 2015.

Gorton is in the process of overseeing a Blueshirts’ rebuild that is reaching a decision point. Does slow and steady careful drafting paired with internal player development win the race? Should the Rangers go all-in on several big-name free agent targets including point-per-game ace Artemi Panarin? Perhaps, some hybrid of smart drafting, successful dealing and savvy free agent recruitment will accelerate the Rangers’ grand plan.

So far, Gorton’s slam dunk was acquiring Mika Zibanejad and a second-round pick from the Ottawa Senators for Derick Brassard and a seventh-round pick. It’s difficult to grade the megadeals that sent Ryan McDonagh and J.T. Miller to the Tampa Bay Lightning, Mats Zuccarello to the Dallas Stars and Kevin Hayes to the Winnipeg Jets based on the sheer number of draft picks and prospects recouped by the Rangers.

But there’s no doubt that this summer will be chock-full of major decisions. Rangers fans can only hope that Gorton can hit the right notes for this organization as he did for the Bruins in 2006.