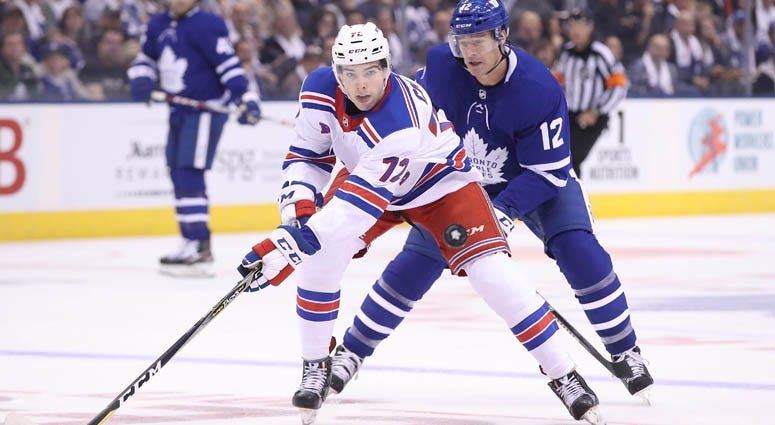 Filip Chytil entered the preseason as favorite to emerge as the Rangers’ second-line center. Over the course of six warmup games, Chytil lost out in the competition as Ryan Strome leapfrogged him on the depth chart and several centers outplayed the 20-year-old Czech Republic native.

On Monday, the Rangers reduced their roster to 22 players and Chytil was among the cuts. Chytil, Vitali Kravtsov, Vinni Lettieri, Ryan Lindgren and Igor Shesterkin were assigned to the minor-league Hartford Wolf Pack.

Boo Nieves will be placed on waivers with the purpose of reassignment to Hartford should he clear. Tarmo Reunanen has been loaned to Finnish hockey team Lukko of the Finnish Liiga. Additionally, Joe Morrow was released from his professional tryout agreement.

Chytil’s chances of making the Rangers’ opening night roster appeared to be in jeopardy after he failed to record a point in three preseason games. His offensive production and overall performances in these exhibitions could be accurately described as sluggish. The former 21st overall pick was unable to separate himself in the crowded competition for places and forced the Blueshirts to make a tough decision.

The Rangers could have opted to open the regular season with Chytil on the right wing – but David Quinn experimented with him in that role toward the end of the preseason and it was an awkward fit.

Chytil being sent to the minors should not be interpreted as a backward step. The move will allow him the opportunity to play big minutes in a defined center role. It’s important to remember that development isn’t always a straight line.

There are expectations and pressure that come with being a first-round pick. It’s understandable why fans expected Chytil to be a lock to begin the 2019-20 season with the Blueshirts. Let’s examine his professional career so far:

On the eve of the 2017-18 season, everyone was buzzing about Chytil’s high potential and raving about his promising future in the NHL. Chytil initially made the Rangers’ 2017-18 opening night roster after impressive preseason showings. He won the Lars-Erik Sjöberg Award as top training camp rookie and became the first Ranger to earn the award in the same year he was drafted since goaltender Dan Blackburn in 2001.

After two games, Chytil was sent to Hartford and only figured in nine of the Rangers’ games that season – recording one goal and two assists. He spent 46 games in Hartford during the 2017-18 season, recording 11 goals and 20 assists. He registered two power play goals and three game-winning goals.

Chytil played all of last season at The Garden, picking up 11 goals and 12 assists in 75 games. He notched three power-play goals, seven power-play points and two game-winning goals. To date, his NHL totals are: 12 goals and 14 assists in 84 games – running just over a full, 82-game season.

Though it sounds like a well-worn coach’s cliché, the NHL is an earn-it league. Ideally, the Rangers wanted Chytil to center the second line between Chris Kreider and Kaapo Kakko – but he fell down the pecking order after being given every chance to claim that spot as his own.

The Rangers don’t want a repeat of last season’s yo-yoing of Chytil between center and wing, up-and-down their NHL lineup. What Chytil needs to help further his development is stability and a defined role – and he’ll get that in Hartford.

A stint in the minors will offer him the opportunity to regain his confidence and rediscover his A-game in a low-pressure setting. Once his tools are sharpened, he might be ready to reassume the second line center role for the big club and stick around at The Garden for the long-term.

It’s easy to forget that Chytil recently turned 20 in September and he’s at a very early stage of his development. He has shown flashes of being an excellent skater, an adept playmaker and an effective forechecker. Time is on his side and I think the Rangers are going to be patient with his development curve.

That’s why giving him major minutes in Hartford is probably better than forcing him onto the NHL roster in a less-than-ideal fit as a right wing. Chytil is a natural center and the Rangers expect him to serve in that role on a scoring line for years to come. He’s not going to improve if he’s given sporadic minutes in his preferred role.

The Rangers are doing the right thing by not rushing Chytil and allowing him the opportunity to develop in Hartford. I think this decision is going to pay off for the Blueshirts in the long run.