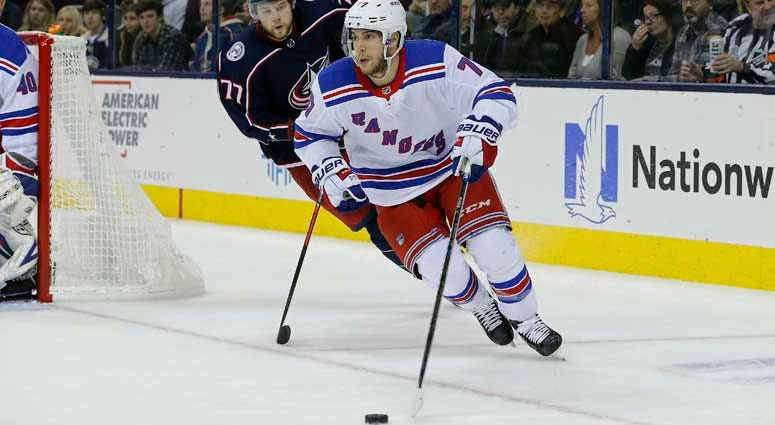 When NHL teams flip the switch toward rebuilding, there's the chance of promise but also potential pitfalls. Trusting youth isn’t always a sure thing. Sometimes, it’s hard to gauge whether a young player will meet his full potential or stagnate.

Heading into training camp, it seemed clear that this was going to be a make-or-break season for 23-year-old Rangers defenseman Tony DeAngelo.

The former 19th overall pick endured a disappointing first year at the Garden, partially due to injuries and partially due to his own performances. DeAngelo finished 2017-18 with zero goals and eight assists in 32 games.

Though the bottom-line numbers weren’t impressive, there were moments when he flashed his high-ceiling potential. His excellent skating and offensive instincts stood out – but what DeAngelo needed most was patience and a good run of games at the NHL level to prove his staying power.

Under first-year head coach David Quinn, DeAngelo is beginning to flex his true potential in his second season with the Rangers. The 5-foot-11 defenseman has recorded 12 points (four goals and eight assists) through 29 games. His points-per-game average has jumped from 0.25 to 0.41.

DeAngelo put in a solid performance on both ends of the rink in Tuesday’s 6-2 home win over the Carolina Hurricanes. He scored two goals, including the first goal of the contest, and tied for the game high with four shots on goal. DeAngelo has now registered a point in two of the last three games (two goals, one assist).

The Rangers are a better team when DeAngelo is in the lineup and using his athleticism, smooth stride and offensive instincts to put pressure on the opposition.

For a Rangers team that is 19-20-7, the difference that DeAngelo makes can be best explained by the most important statistic -- wins. The Rangers have posted a 17-8-4 record in games that DeAngelo has played this season.

This has been a different kind of season for DeAngelo for all the right reasons. He’s certainly demonstrating that he has what it takes to make it in the NHL and is proving why he could be a productive defenseman for years to come.