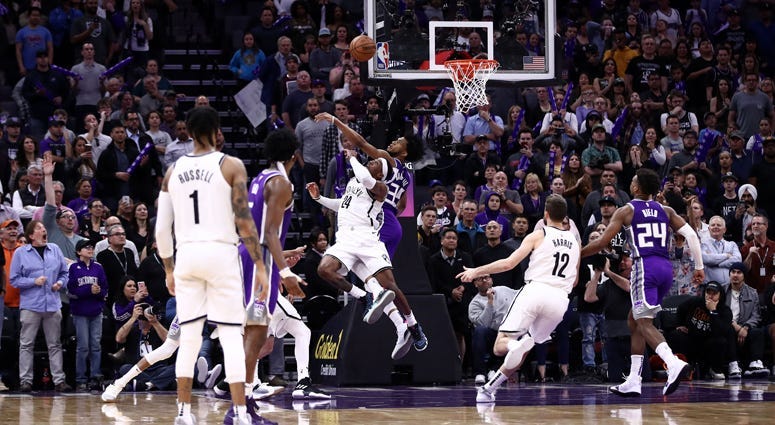 When Nets coach Kenny Atkinson reached deep into his bench and sent out a lineup that included previously unused Rondae Hollis-Jefferson, Jared Dudley and Treveon Graham to start the fourth quarter in Sacramento on Tuesday night, I assumed he was waving a white flag.

Brooklyn was down by 25 points. Since the 1954-55 season, per ESPN, NBA teams were 3-3,028 when facing that deficit at the start of the fourth quarter. You don’t normally come back from that deep a hole by playing three guys with below-average-to-God-awful 3-point field goal percentages at the same time.

Well, if the Nets have proven one thing this season, it’s that they do not give up. They pulled a rabbit out of their hat to escape Sacramento with a 123-121 “must” win.

As of Wednesday morning, NBA teams are now 4-3,028 when down 25-plus points at the start of the fourth quarter in the shot-clock era.

How did the Nets (37-36, seventh place in the East, three games up on ninth-place Orlando) engineer the largest comeback in franchise history (28 points after the Kings opened the third quarter with a 20-0 run to go up 86-58), a victory that, at least temporarily, saved their season given the brutality of their remaining slate?

Look to the center -- Atkinson constructed a lineup with Hollis-Jefferson at actual center and D’Angelo Russell as the center of attention. Those adjustments set in motion a fourth quarter that will have any Nets fan who went to bed early Tuesday night regretting it for days.

The lean 6-foot-7 Hollis-Jefferson was acquired by Brooklyn during the 2015 draft to be a wing defender. His perimeter shot needed work, but the thinking was that he could get by using his slashing ability. Unfortunately, the league has only gotten more 3-point heavy since. Several folks have told me that they believed Atkinson was trying to save Hollis-Jefferson’s career by transitioning him to power forward three seasons ago. Again, his inefficient shooting still proved to be a severe offensive hindrance. Opponents learned to play off him, which in turn made him conduct his drives to the basket using the highest levels of difficulty. Multiple injuries this season only set him back further.

Give Hollis-Jefferson, 24, credit for staying ready in addition to being, by all accounts, an important culture fit in the Nets’ locker room. I’m sure he wasn’t happy about being dropped from the rotation, with rookie Rodions Kurucs, DeMarre Carroll, Graham and Dudley usurping him on Atkinson’s depth chart at power forward.

However, Atkinson surely noted that Hollis-Jefferson has played some of his best ball this season as an ultra-small-ball five. OK, he was often facing opponents’ backups, including during the first 3:30 of Tuesday’s fourth quarter. But the differences in responsibilities between the four and the five are striking. As long as Hollis-Jefferson could hold his own on the defensive end, including on the defensive boards, then the Nets could theoretically come out ahead with him at center.

After allowing the Kings to shoot 60 percent from the floor through three quarters, the Nets turned their defense up a notch in the final frame. Sacramento rookie center Marvin Bagley III, who toyed with Brooklyn by scoring 24 points on 11-for-12 shooting in the first three quarters, made only 1 of 3 fourth-quarter attempts. The Nets’ fourth-quarter defensive-rebounding percentage was a satisfactory 72 after a soft 56 percent prior effort.

On the other end, as the high screener in a five-out, pick-and-roll scheme, Hollis-Jefferson could always dive to the basket without worrying about making long-range shots. He responded by converting all five of his fourth-quarter field goal attempts, including the game-winner with 0.8 seconds remaining on one of his patented double-clutch, over-his-head layups.

It should not be lost on anyone that DLo went off for 27 fourth-quarter points -- the NBA’s season high -- with both Spencer Dinwiddie and Caris LeVert on the Nets’ bench.  Russell finished with a career-high 44 points.

Brooklyn might not be able to have it both ways. Dinwiddie and LeVert are both capable facilitators when healthy, but it’s fair to wonder whether Russell would have been able to explode like he did Tuesday -- and in several other contests this season -- if he was simultaneously feeling urges to defer to other ballhandlers on varying possessions during his hot streaks.

Having offensively limited Hollis-Jefferson, Dudley, Graham and Kurucs share the court for almost the entire 12 fourth-quarter minutes allowed Russell to take command with no Plan B. Not every decision was appropriate, but you can’t argue with his stat line in the period: 10-for-15 from the floor (including 4-for-7 from 3-point range), four assists and just one turnover against a team that came into the game with the league’s second-highest forced-turnover percentage.

Russell, 23, is a unique talent. Before the Nets even consider how to handle his restricted free agency this summer, they need to figure out how to best use him down the stretch this season. I believe Atkinson should move LeVert back to a bench role, replacing him with another shooter like Allen Crabbe, if he can overcome his knee soreness by Friday’s tilt at the Lakers. LeVert has struggled (36/25/68 shooting split) in his 17 games since returning from the dislocated ankle that cost him 42 games.

It can’t be overstated how important Friday’s game will be. It might be the last time the Nets are favored until the finale versus Miami at the Barclays Center. Fortunately, instead of reeling at 0-4 on their seven-game road trip with doubt about their postseason dreams fostering, the Nets will go into Los Angeles on the high of a comeback for the ages.