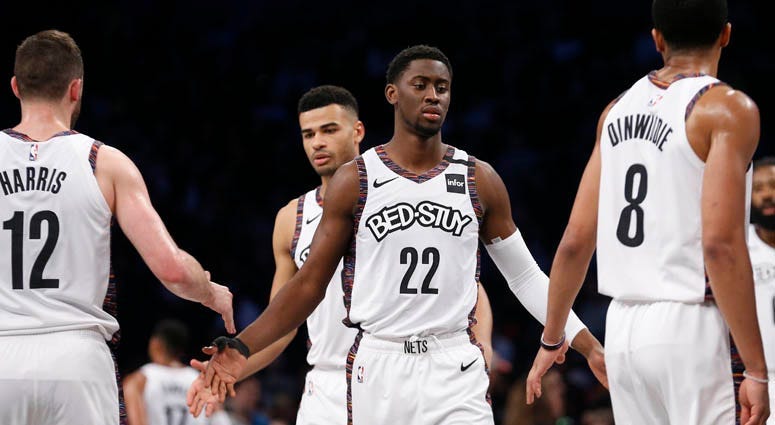 Detroit’s starting frontcourt tandem of center Andre Drummond and power forward Blake Griffin had a combined 13 years of experience and 82 pounds over their Nets counterparts Jarrett Allen and Rodions Kurucs during their contest Monday at a sold-out Barclays Center.

Drummond has earned two trips to the NBA All-Star Game during his career while Griffin is a mainstay, with six appearances.

Meanwhile, Allen, 20, is in his first full season as an NBA starter. Kurucs, 21, is a rookie second-round pick who logged about 45 total minutes on the court in Barcelona last season. He hadn’t played much power forward all season until Nets coach Kenny Atkinson inserted him into the starting lineup four games ago when Treveon Graham was felled by a sore back.

There are too many disclaimers to call Monday’s 103-75 Brooklyn rout over the previously red-hot Pistons “a statement game,” but if you need one, it’s this: No matter how tough the road ahead appears to be in this playoff chase, with many big and physical teams standing in Brooklyn’s way, Allen and Kurucs won’t back down from anyone.

The Nets are the league’s top-rated defense since Kurucs moved into the starting five, yielding just 92.3 points per 100 possessions. I can’t remember a time when I’ve typed that before.

The Nets held Griffin and Drummond to a combined 6-of-24 from the floor Monday. Griffin’s sole field goal came on a straight-on 3-pointer in the second quarter when the Nets were in a zone defense.

“It’s hard to guard (Griffin) because he’s big,” Kurucs said. “He’s heavier than me. I had to play hard -- I had to get into his legs, like I played before against (Cleveland’s Kevin) Love and against (Atlanta’s John) Collins (in Brooklyn’s last two games).”

Kurucs was a thicket of thorns in Griffin’s back and sides throughout his 20 minutes of action. His three steals/breakaway dunks in the first half set the tone for Brooklyn.

“We wanted to limit Blake’s touches,” Atkinson said. “That was part of the game plan. Obviously, the steals -- we didn’t tell him to steal so many of them. We just said, ‘Deny him. Make him work.' Rodi’s got a great sense of anticipation, how to get in passing lanes. I think that really threw off their timing.”

And though Detroit was credited with 17 offensive rebounds, they led to just 12 second-chance points. Allen’s rim protection had a lot to do with their 4-of-16 shooting on those opportunities.

“We knew we had to bring a certain physicality, so we had to turn it up a little bit,” Allen said. “It was a whole team effort. For us, it was keep Drummond off the boards. So you see we had like three people on him for every rebound, and Allen Crabbe (career-high 10 defensive rebounds) swooped in and got them.”

The Pistons converted on just 12 of 37 (32 percent) of their shots in the paint. Granted, Detroit was on the back end of a back-to-back, even though Sunday’s affair was a noon start and their big lead over the visiting Bulls allowed them to rest their starters the entire fourth quarter.

Still, Detroit might look at Monday as a schedule loss, since they likely won’t have too many more games in which they shoot 27.8 percent overall from the floor. While temporarily falling a half-game behind the 36-33 Nets for the sixth seed in the Eastern Conference, the Pistons’ upcoming schedule is nothing like Brooklyn’s. You could feel the Nets’ far greater sense of urgency both on the court and among the raucous crowd.

Per Tankathon.com, the Nets have the toughest remaining slate in the league. Their opponents in the final 13 games have an aggregate .603 winning percentage. Brooklyn's 4½-game lead over ninth-place Orlando (plus a tiebreaker edge) isn’t as gaudy as it appears.

Brooklyn’s next seven games are on the road, starting with a rare national TV appearance Wednesday in Oklahoma City. After that, the Nets will host Boston, Milwaukee and Toronto before traveling to Milwaukee and Indiana. The home finale versus eighth-place Miami just might be a play-in game.

However, the Nets have been playing with a significantly more aggressive defensive mentality than they did earlier in the season. They really got into Detroit on Monday, both on and off the ball, while using the zone as a change-of-pace rather than the base. I’m not sure how much credit to give Kurucs and his teammates versus the level of competition for the results, but it will be interesting to see how the Nets hold up defensively against the better teams.