It’s back for another season: the New York Giants quotebook! Today, check out a half-dozen answers from head coach Brian Daboll and quarterback Daniel Jones about various topics coming out of Sunday’s big win in Tennessee:

BRIAN DABOLL on Darius Slayton’s limited playing time of only seven snaps: “We had personnel packs, personnel groups for all our receivers. We'll do that for every game. Maybe it's more, maybe it's less. It just depends on what we're calling and what Mike (Kafka)'s calling and what we see. He's in plenty of them, but we obviously didn't get to some of them. I thought the plays that he was in on, he did his job. Made a good decision on the one play down there at the end of the drive there, I think was – to take care of the football and get four, five, six yards, or whatever it was.”

DABOLL on having to get Kadarius Toney more involved: “We'll see, whatever we think we've got to do for that week. We've got a bunch of receivers active. We'll figure out ways to put him in the game. Maybe it's less. Maybe it's more. Each week is different. Who's inactive might be different. I think it's it depends on everything leading up to it. And that's why we make those decisions.”

DANIEL JONES on what the Giants’ win will do for their mindset in future close games: “I think it means a lot as players to know that (Daboll) has confidence in us to make that play at a critical point in the game. It's a good feeling and it gives us confidence as a unit, and he's been clear from the get-go that he's going to be aggressive in those situations and give us a chance to make a play. So that's what he did and it gives us confidence as a group, but we understand the responsibility to execute in those situations and take advantage of the opportunity.” 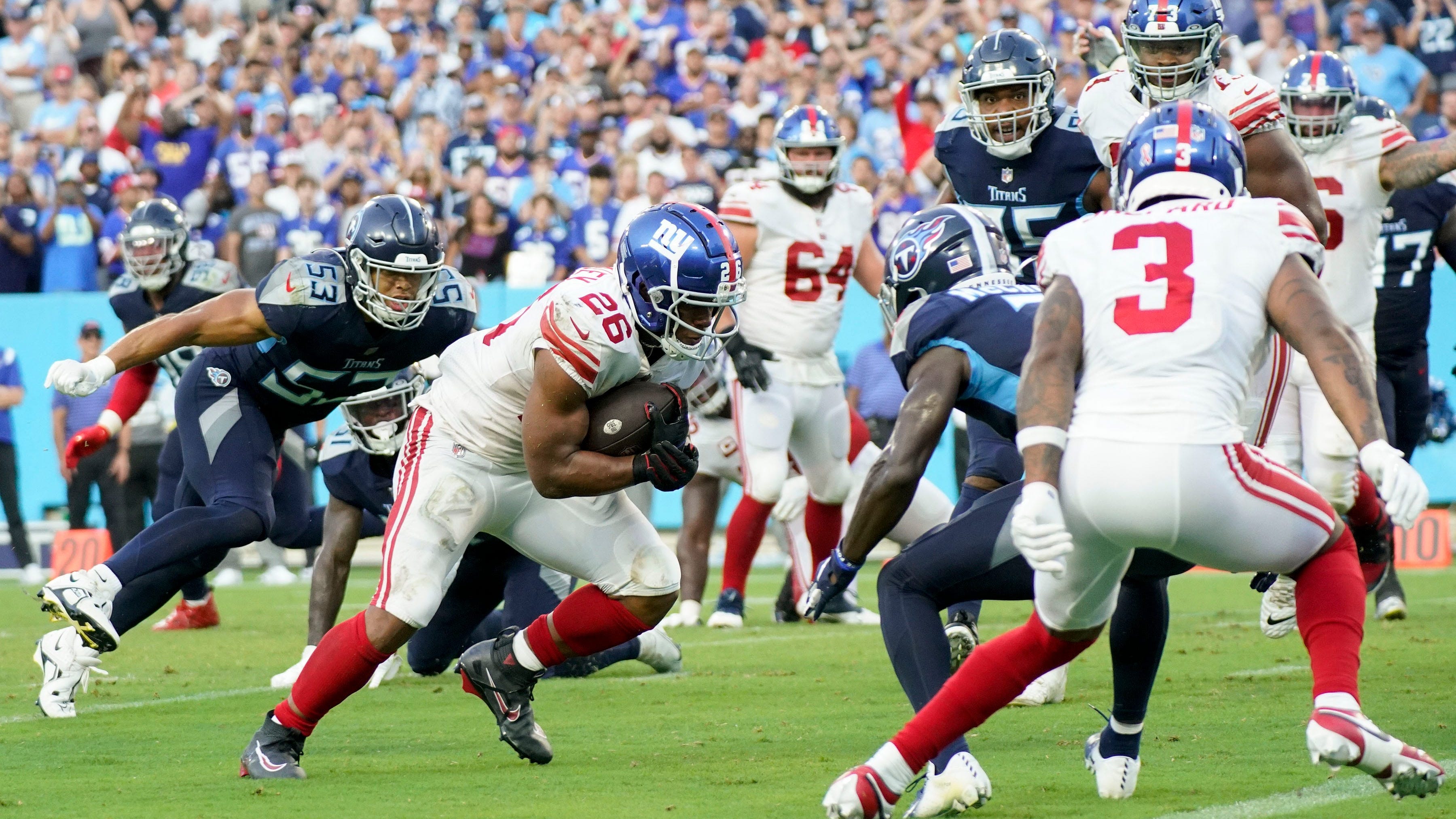 DABOLL on his rotation at left guard: “(Offensive line coach) Bobby (Johnson) did a great job. We knew we were going a couple of series and flipping them in and out and Bobby did a great job with that. Communicating with those guys. Those guys were, I couldn't give you a play-by-play of all of them, except on one of them, I knew we got it. The first half we were – field position was killing us, right? We had a big punt return, and we fumbled the ball and a little scramble. So, I thought we were efficient.”

DABOLL on Wan’Dale Robinson’s injury: “He got hurt. That's all I'm saying. I think he landed weird or something. I haven't even got to him. I just asked him at halftime real quick, 'You doing OK?' He said, 'Yeah.'”

JONES on spreading the ball around: “I think it was just trying to stay ahead of the chains and move the ball. Take advantage of some of their spots in their zone and try to keep it moving forward. I thought we did an OK job of that. Bunch of things we'll look to clean up, certainly in the passing game. But guys did a good job getting where we're supposed to be and making plays.”