When the Islanders selected Noah Dobson with the 12th overall pick in the 2018 NHL Entry Draft, a plan was put in place to bring him along at a pace where he could develop into an elite NHL defenseman.

Stating the obvious, that plan has worked to perfection.

“I’ve always had a lot of respect for the plan they had,” said Dobson. “They communicated with me.”

Dobson was returned to juniors for the 2018-19 season, and then joined the Islanders for the 2019-20 season.  He played in only 34 games during his first NHL season, totaling one goal and six assists, but three seasons later he has established himself as not only one of the best defensemen on the Islanders, but also as one of the top young blueliners in the National Hockey League.

Last season, the 21-year-old Dobson had 13 goals and 38 assists over 80 games, and through 17 games this season, Dobson has five goals and seven assists.

From President and General Manager Lou Lamoriello right on down to former Head Coach Barry Trotz, current Head Coach Lane Lambert and the entire staff, the handling of Dobson has been outstanding.

And Dobson displayed some tremendous patience.

“At the time, when you’re not playing it’s hard to see the bigger picture,” said Dobson. “It’s easy to get frustrated but I just tried to use that time when I wasn’t playing early on to get better and use the practice time to get better and now it’s starting to pay off. It was definitely a slow process but I think in the big picture, it was the right process for sure.”

“I think everyone handles that a little bit differently,” said fellow defenseman Scott Mayfield, who was also a part-time player at the start of his NHL career. “I think (Noah) handled it well. It’s always just staying ready and being ready when you get your chance. Especially for a guy like him who was a little more highly touted as a first-round pick and all that. You knew the chance was going to come.”

Under Trotz, the emphasis on developing Dobson was on the defensive part of his game, but his offensive touch really started to blossom last season. And now, this season, Dobson has been the total package. Lambert has seen Dobson’s growth from day one as the Associate Coach to now in his first season as the Islanders’ Head Coach.

It’s a term that is used a lot in sports, but sometimes you just have to trust the process.

“It’s always a process with a younger player,” said Lambert. “I thought the handling of him was very good. He was brought along slowly and was not asked to do too much and as a result he’s continued to grow and grow. He’s playing very well for us.” 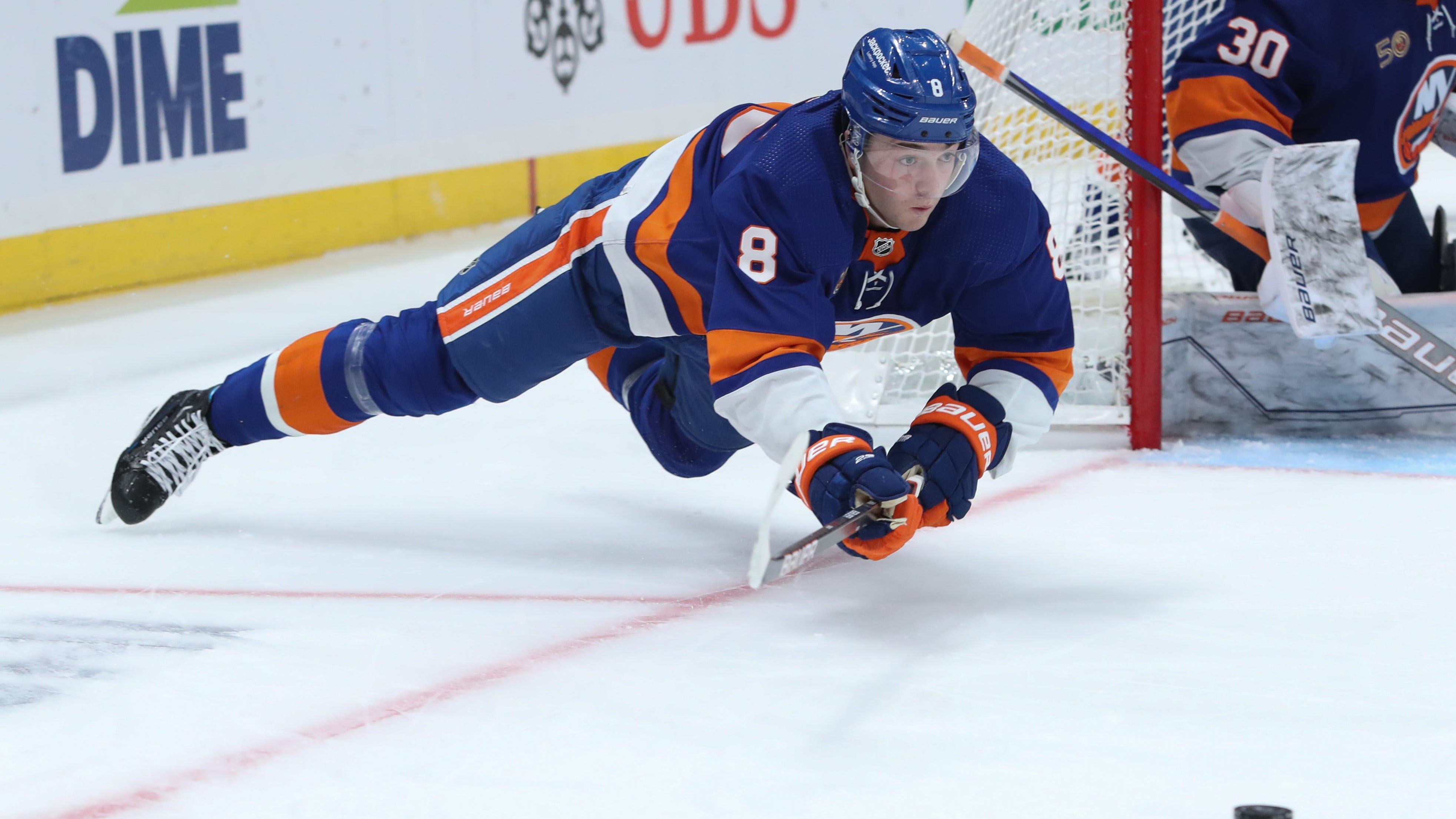 Schwartz: The Islanders are getting offensive with a little help from their D

And Dobson has already developed some chemistry with his new blueline partner Alexander Romanov.

“It’s been a good start,” said Dobson. “Early on, just getting used to playing with Romy…a little adjustment there for both of us, but I think we’re comfortable now with each other’s games. We kind of know what to expect and that’s been a big help. I’m just trying to chip in offensively as well when I can and get some pucks to the net and good things will happen.”

Dobson has been a big reason why the Islanders are off to a terrific 11-6-0 start, their 22 points good for second place in the Metropolitan Division heading into Thursday night’s game in Nashville. The Islanders’ defensemen have been more aggressive and jumping into the play offensively a lot more under Lambert and we’re seeing the results of that.

“(Dobson has) been great,” said Mayfield, who has four goals this season himself. “It took him a while to find it. I think we know his strengths – it’s skating and getting the puck up the ice. It’s the offensive plays and he’s been better in the d-zone so he’s rounding out his game. Each game he gets better and you’ve seen the progression over the years and it’s been fun to see.”

That progression at the NHL level for Dobson is a continuation from his final two seasons in juniors.

Dobson was a first team Quebec Major Junior Hockey League All-Star in 2017-18 and 2018-19, and he led two different teams to titles; Acadie-Bathurst won the Memorial Cup title in 2018 before trading Dobson to Rouyn-Noranda, and Dobson subsequently led them to the Memorial Cup championship and was named the playoff Most Valuable Player.

Then there was the steady progress during his first four NHL seasons – and this season, the system is in place for Dobson to thrive. Islanders defensemen have scored 14 goals so far this season, and Dobson has five of them. He’s also been a force with the man advantage, racking up six power play points including two power play goals.

“For my style of game, it suits me well,” said Dobson. “I enjoy playing that style; getting up the ice, being aggressive…good gaps, trying to close plays early and then just having the freedom in the o-zone to be moving around a little bit and make plays. It’s been good. I think we’ve been reliable defensively first and when we’ve had chances create offense. It’s been good to chip in and help out our forwards.”

Dobson’s transformation from being a part-time player as a rookie to now being on the cusp of becoming an elite NHL defenseman can be attributed to a number of factors. But to be a great player, you have to have a great skillset to start, and there’s no doubt that Dobson has an elite toolbox.

“It’s a combination of everything,” said Lambert. “He sees the game well. He reads the game well and he has poise. If you have poise to make plays and make first passes, you can have success and I think he does a really good job of that.”

But it’s not always just about the talent. A lot of players have it, but they can’t seem to put it all together. Along the way, a young player has to have some guidance, and not necessarily from the coaches.

In Dobson’s case, a lot of his success is predicated on receiving some help over the years from some veteran defensemen who showed him the ropes.

“I have a lot of respect and gratefulness for the guys that have been around here,” said Dobson. “I lived with Dennis Seidenberg, played with Johnny Boychuk, Andy Greene, and Zdeno Chara, so as a young d-man that’s a really good luxury to have. I’ve been spoiled that way and I owe a lot to those guys…they mean a lot to me.”

How good is Dobson and how good can he be?

He’s a huge ingredient of what the Islanders hope will be the recipe for winning a Stanley Cup. Helping the team win is the primary focus for Dobson, but his play is starting to open up some eyes around the entire NHL, and that could mean a tremendous individual achievement for the 6-foot-4, 194-pound Dobson.

In the 50-year history of the Islanders, only one player has won the Norris Trophy, given annually to the NHL’s best defenseman. That was Denis Potvin, who won it three times.

Is Dobson thinking about it?

“No, not really,” said Dobson. “I’m just trying to focus on one game at a time. My job, being on the power play, you have to produce and you have to put up numbers, but at the same time just focus on being strong defensively. Obviously, every d-man would love to win one of those one day but it’s not something that I think about at all. I’m just trying to focus on getting better each day and we’ll see what happens.”

In the words of the late great Tom Petty, “The waiting is the hardest part.” Noah Dobson had to wait a bit for his chance to shine for the Islanders early in his career, but now in his fourth season, that patience has paid off – and Dobson is not only excelling with his individual game, but he's helping the Islanders win games.