The Knicks have started their season at 7-8, despite having one of the league’s youngest rosters, a non-existent offseason program, and one of the toughest schedules in the NBA. It is a start to the season that the franchise, coaching staff, and players should be proud of.

It has been accomplished on the strength of the Knicks’ defense, which has been one of the best in the league this year. This is where they stand in some of the broadest defensive metrics (though the games of 1/18):

Tom Thibodeau’s defensive bonafides from his time coaching the Bulls are well known, and on the surface it appears that his defensive principles, paired with the effort of the players, have made his team a defensive force. The intensity and effort on the floor defensively is easy to spot.

There are some underlying numbers, however, that are troubling, and should give fans some pause that the Knicks defense from the 90’s is back, and there is a high chance of serious regression.

The best defenses in the NBA force opponents to shoot shots from the least efficient areas of the floor, which is considered the large swath of space between the restricted area and the three-point line. According to Cleaning the Glass, the Knicks force teams to shoot the second fewest percentage of shots (22.3 percent) from that area of the floor, compared to the rest of the NBA.

Conversely, the Knicks allow the fifth highest percentage of shots from behind the three-point line (39.8) and the third highest percentage of shots at the rim (37.9) in the NBA. Despite that, opponents are still only managing a 50.1 percent Effective Field Goal Percentage, which is the second-lowest number in the NBA. Judging only by the location of their opponents’ shots (and assuming a NBA average shooting rate against them from those locations), the Knicks should be allowing a 55.2 EFG%, which would be the second worst in the NBA.

Cleaning the Glass tracks both these numbers, and you can see it in the accompanying chart that the Knicks are one of two teams in the top half of the league with such a stark difference between their actual EFG% allowed and the projected. The first column below from Cleaning The Glass is the team’s actual EFG% allowed, and the second is their expected based on shot location. 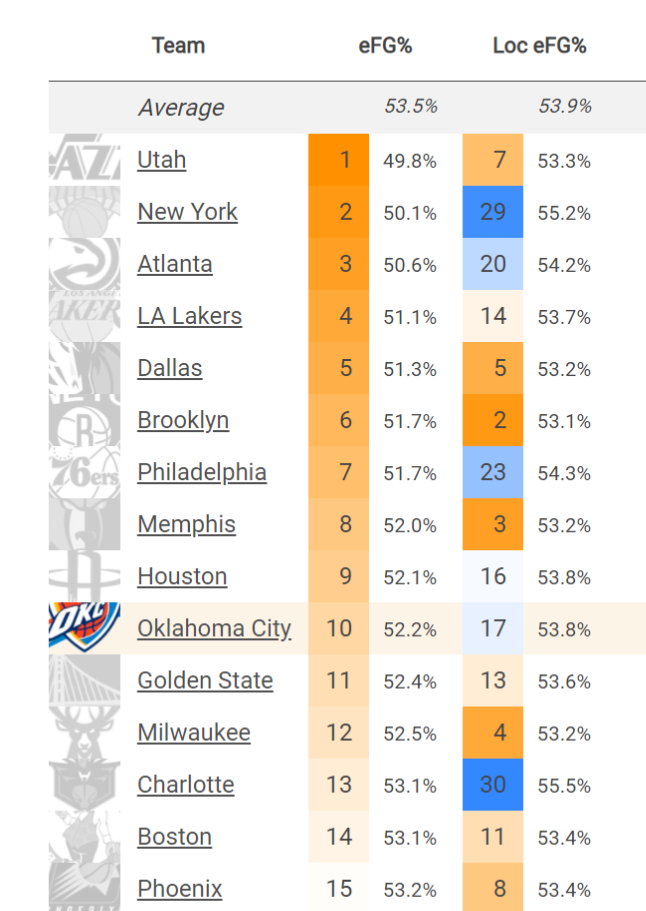 The Knicks do maintain control over some of that disparity. Despite allowing so many shots at the rim, the presence of Mitchell Robinson (and to a lesser extent Nerlens Noel and Julius Randle) is keeping teams to a 59.6 field goal percentage at the rim, which is the eighth-best mark in the NBA. Robinson has cut his foul rate to 3.6 percent, which is in the league’s 61st percentile, while maintaining a block rate (3.1%) in the league’s 84th percentile.

The true danger area for the Knicks is the three-point line, where lady luck seems to have shined on them. There’s little statistical evidence that teams can assert any sort of meaningful control on how often opponents make their three-point shots. This includes successfully choosing who is taking those shots. There are areas that can impact success rate on the margin, such as shot location, but it is minimal.

Through 15 games, the Knicks have had the good fortune of opponents only making 31 percent of their three-point shots, despite many of them being completely uncontested. The Knicks have allowed the third-most wide open three-point shots (20.6 shots per game with the closest defender six-plus feet away) in the league, but teams are only making 32 percent of those shots.

The team ranked 15th in the NBA has their opponent shooting 39.9 percent against them on wide open threes. If Knicks opponents were shooting at that rate, they would be making an additional 1.5 three-pointers per game.

The Knicks are allowing the 21st most open threes (13.3 shots per game with the closest defender 4-6 feet away), and opponents are shooting 31.7 percent on those shots, which is the seventh lowest rate in the league. If Knicks opponents were shooting closer to the league average against them on those shots (34.9 percent), they would be making about another half three-pointer per game.

Adding just those additional two three point shots per game against the Knicks and adding the six points they would be worth to their points allowed per game, they would drop to about the 10th ranked defense. It is still an improved rank compared to where they were in past seasons, and an impressive accomplishment, but their defensive improvement is probably overstated through the first 15 games of the season.

The Knicks have done a decent job preventing three-point attempts from the corners (17th in the NBA in allowing corner threes), which may help these number long term. But on those shots, opponents are only shooting 35.3 percent (fifth lowest mark in the league), when the league average is closer to 39 percent. Other defensive metrics for the Knicks do not indicate a special level of defense being played either. They are only 25th in the NBA in forcing turnovers, and 20th in allowing offensive rebounds.

None of this means that the Knicks aren’t playing a much better brand of defense than they have in prior years, when they were consistently in the bottom third of the NBA. Tom Thibodeau’s arrival has made a substantial difference, but the Knicks are probably closer to the 12th best defensive team in the league than the first. It is only a matter of time before the unescapable fate of math catches up with their performance on defense.

Check out the latest episode of The Bank Shot, with The Athletic’s Seth Partnow talking about the Knicks defense and other topics, along with past episodes here. You can also subscribe on Apple Podcasts and Stitcher.