Making the playoffs is a celebration of a year-long grind for MLB teams. All the hard work from the start of spring training to Game 162 in September or October pays off for the select teams that make the postseason.

But it’s not all celebratory, especially when it comes to the playoff shares meeting.

Ron Darling and Jimmy Rollins of the Audacy Original Podcast “Unwritten: Behind Baseball’s Secret Rules” took us inside those playoff shares meetings that the duo described as dicey, cutthroat, and God awful.

“You have this one pie that includes all of this money from attendance in the postseason and parking and marketing and all that stuff, and you’re going to have this big pie,” Ron Darling explained (28:02 in player above). “And what you have to do in the clubhouse is decide how to split it up.”

“There are only 25 voting members. We’ll call them members. Imagine making an investment, like you said, and you don’t put any money in technically. You’re going to get this money out but there are a few shares that you have to really decide on how this gets broken down because the more shares we give, the less of the pie we’re able to receive as players,” Rollins said. “And it is so cutthroat.”

All of the different personalities of the clubhouse must come together and factor everything in. Everyone has a different point of view depending on their experience.

“You have veteran guys that this is maybe year 12 and this is their first time in the playoffs because they got traded over and they just got there and you as a guy that’s been to the playoffs a couple years, you’ve been through this,” Rollins continued. “It seems like the more you’ve been through it, the more giving you are. You know, let’s make sure everybody gets paid because we know it can make a difference in their life. Well, some guys are like ‘No. They weren’t on the field. They weren’t traveling. This scout sucked. Their report never worked.’

“It’s like yo, you’re getting millions of dollars and yes, when this breaks down it’s a few hundred thousand dollars, but is that going to change our life as a player? No, it’s not. Could it change this other person’s life to pay for college, pay for debts that this person may have. ‘Well, that’s not our problem.’ What are you talking about? They’re in this clubhouse. They’re contributing in some fashion or another from the PR people who are dealing with our attitudes after a loss and have to come chase us down and have to deal with the media and their attitudes for not getting players. How do we compensate them? Do we cash them out? What about the guy that got traded and he’s a big part but he was only here for a month? How do you pay this guy because he no longer gets a vote. And then, speaking of that player, well his other team – the team he got traded from – is in the playoffs and he’s going to get a playoff share there. You don’t know that.

“And when I say it gets dicey in there where players have gotten up and left, like ‘F it, I’m out. Y’all deal with this. You don’t want to hear what I have to say.’ And it’s like, we are trying to do the best for everyone involved,” he continued. “No matter what, you have a full share. We’re really discussing the next 10 shares and who gets what.”

Some players' true colors really come out during these meetings, Rollins explained.

“Trust me, I’ve been in a meeting where I’m just like, I’m sitting there, eyes this big like I can’t believe you guys are this selfish. You’re making $20 million, you’re making 25, you’re making 30, and you’re going to sit here and fight – and maybe it’s about principle for them – you’re fighting over $300,000? That’s what you’re going to do? And you’re going to give this scout $10,000? I’ve had a check and had it sent back to me personally with a note as if I’m the one that made a decision on who got what. All I can do is take a vote and you have 25 guys that raise their hand or you have five guys that raise their hand in opposition. That’s how it goes.”

Darling played before the standard salary for players was in the millions – if not tens of millions – and he reiterated Rollins’ point.

“If you didn’t know it then, you know who the cheap guys are on the team after this meeting. It’s amazing,” Darling said. “We were very generous. Everybody got everything. We’re giving money to clubhouse kids, we’re making sure – because you give cash and bonuses to some people, right, and for everyone out there, the further you go the more money you get. You win the World Series, all of a sudden you’re getting a quarter-million dollars each or more sometimes, much more in the case now.”

However, there was one instance in which one member of the organization was left out entirely due to some poor performance.

“We had a traveling secretary that was just bad, Jimmy, just bad. Every plane’s late. Busses never on the tarmac. Bags never in your room. He had a bad year. Hit .180 with no homers,” Darling laughed.

“So the entire team is screaming and yelling, ‘He’s not getting a share!’ I’m not the head of it, but I was one of the guys saying traditionally, guys, I just want to say this and you guys can do whatever you want to do,” he explained. ‘Ronny, I am not paying that M-Fer. I’m not paying him.’ So we ended up cutting this guy out of it. To this day I feel awful about it and he just, I mean, he was out of baseball like within a year. It was just that bad. It was awful, but for you folks out there, now you know what a shares meeting is like.”

These meetings don’t even occur after the “pie” is determined. They take place before the playoffs even begin.

“This is before you’ve played one postseason game. This is like the third week in September when you know you’re in,” Darling said. “You have this meeting and this meeting is so God awful after you take it you feel like you should shower or wash off or something because it gets dirty in there.” 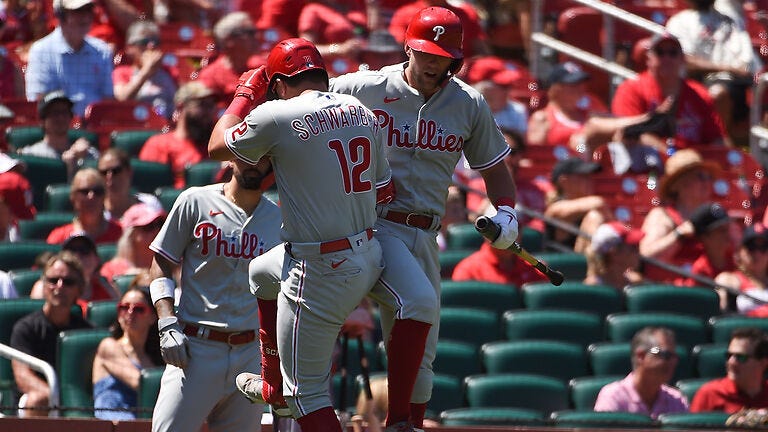 After falling to Cardinals in 2011, Jimmy Rollins happy Phillies will face St. Louis in NLDS