The Cincinnati Reds snuck into the postseason in an expanded field in 2020, but the organization appears to be willing to take a step back in 2021.

Though he remains a free agent, there's almost no evidence that the Reds are mounting a serious effort to retain reigning National League Cy Young Award winner Trevor Bauer.

In addition to reportedly considering the trades of Eugenio Suarez and Sonny Gray, RADIO.COM MLB Insider Jon Heyman reported in December that the Reds are also willing to listen on former All-Star righty Luis Castillo.

Naturally, Castillo, 28, has "an appropriately high" pricetag, per Heyman, which perhaps makes a trade less than likely. Still, these four contenders could benefit from the addition of Castillo: 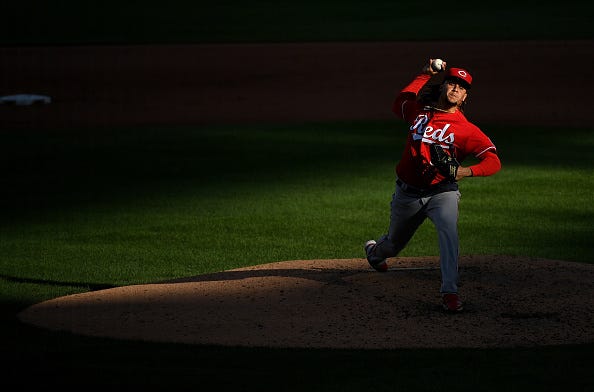 Could Luis Castillo be a fit for the Yankees? Photo credit (Justin Berl/Getty Images)

For as confident as the Yankees are in Gerrit Cole, they could lose Masahiro Tanaka, James Paxton and J.A. Happ in free agency, leaving them without a ton of certainty behind their ace. Deivi Garcia and Jordan Montgomery coming of age, along with the return of Domingo German, could help to build a strong rotation for Aaron Boone, though the team could benefit from making another external addition. That might come in the form of a free agent, though the idea of adding Castillo, under team control through 2023, is tantalizing. Top prospect Jasson Dominguez likely isn't going anywhere, though it would be interesting to see if the Yankees could build a package around some combination of Clarke Schmidt, Oswald Peraza and Luis Gil. 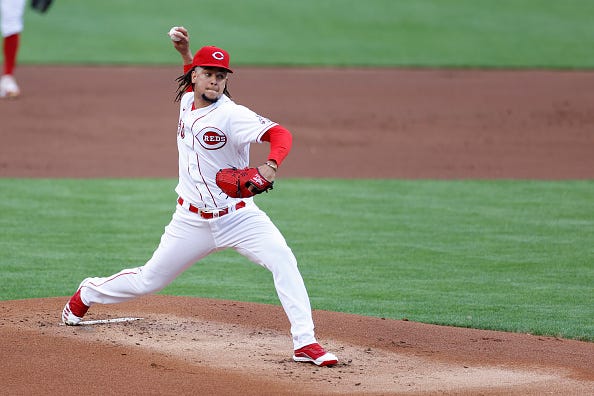 With Mike Trout and Anthony Rendon at the forefront, the Angels have a lineup that's ready to compete for the World Series right now. The problem is, their pitching isn't anywhere close. They already linked up with the Reds to add Iglesias earlier this offseason, and trading for Castillo - perhaps in addition to a major signing like Trevor Bauer - may be the team's best chance of a quick turnaround. Jo Adell almost certainly wouldn't be part of a trade, though you wonder if an organization with so much existing outfielding talent at the major league level would be willing to part with outfielder Brandon Marsh, currently the organization's top prospect. 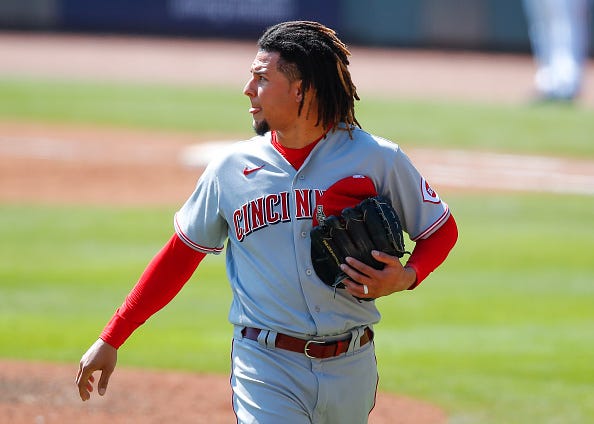 Luis Castillo could be a fit for the Blue Jays. Photo credit (Todd Kirkland/Getty Images)

Whether it's signing a major position player - George Springer, D.J. LeMahieu - or a pitcher like Bauer, the Blue Jays appear intent on making a splash this offseason. If they get left empty-handed, or maybe if they simply land Springer or LeMahieu as opposed to Bauer, Castillo would make sense as a trade target. The Blue Jays snuck into the postseason in the expanded field of 2020, but if they hope to compete for the American League East title, they'll probably need to add at least one more frontline-caliber starter. Castillo would be an excellent person to pair with Hyun-jin Ryu and top prospect Nate Pearson, as the Blue Jays try to close the gap between them and the Yankees/Tampa Bay Rays. Infielder Jordan Groshans, MLB Pipeline's No. 67 prospect in baseball, could be someone to build a trade package around. 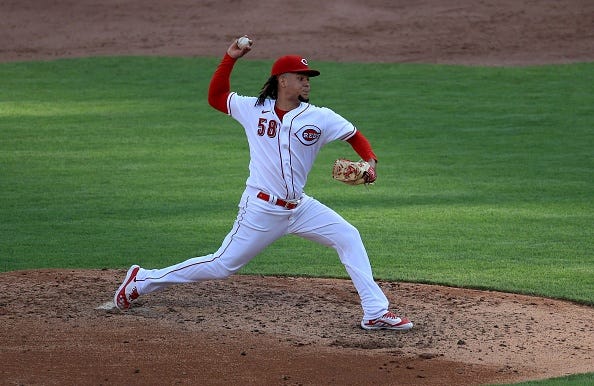 You can't exactly call it keeping up with the Joneses when you're the defending World Series Champions, but it would be impossible for the Dodgers not to notice that the division-rival San Diego Padres have built an army in starting pitching. The Padres have added two former Cy Young Award winners this offseason in Blake Snell and Yu Darvish, in addition to already employing Dinelson Lamet, Chris Paddack and Mike Clevinger (who will miss 2021). The Dodgers may simply move forward with Clayton Kershaw, Walker Buehler, Dustin May and Julio Urias, but they do possess the pieces to complete a trade for Castillo if Andrew Friedman is so inclined.