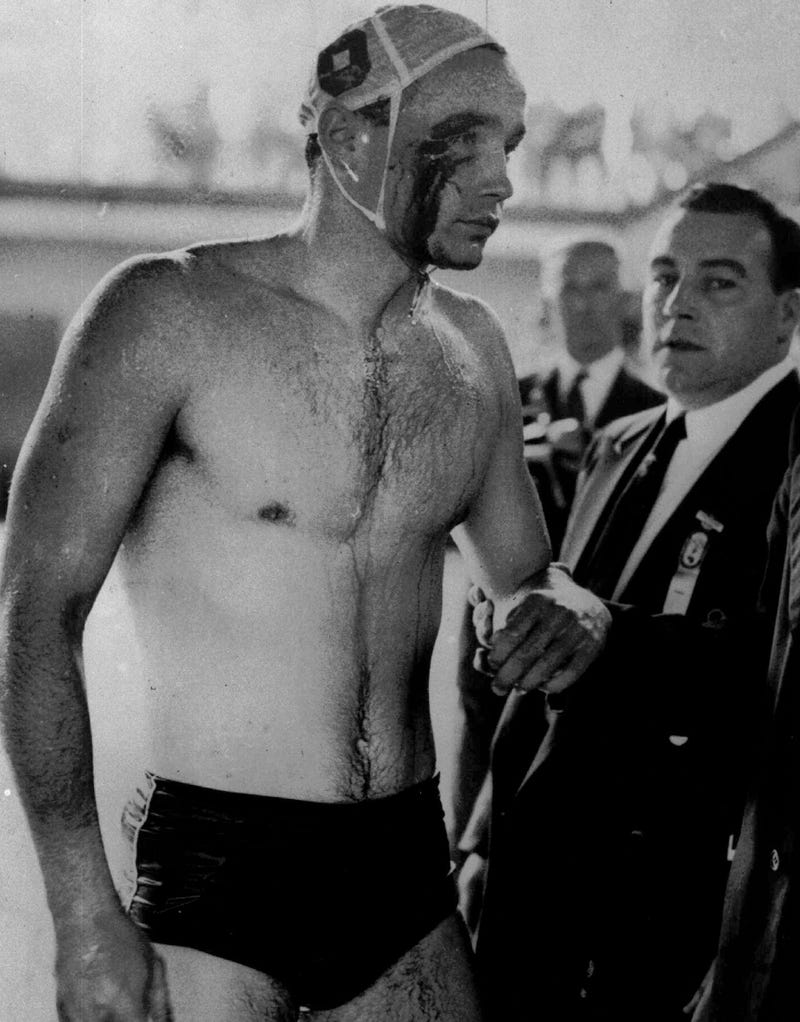 Photo credit FILE - In this Dec. 6, 1956 file photo blood streams from the cut eye of Hungarian Ervin Zador injured during a fight with a member of the Soviet team in the closing stages of the Hungary vs. USSR water polo match in Melbourne, Australia. The Melbourne Olympics were already quite unique before they started. They were the first games held in the southern hemisphere, and ran from Nov. 22 to Dec. 8 to take in the Australian summer. (AP Photo)
By The Associated Press

Quentin Tarantino called a documentary film about it “the best untold story ever.” Even allowing for the famed director's Hollywood-spawned hyperbole, generations of sports fans have never heard of one of the most extraordinary events in Olympic history.

It was dubbed “Blood in the Water” and centers on a water polo match between Hungary and the Soviet Union at the 1956 Olympics in Melbourne, Australia. The semifinal match occurred just weeks after the Soviet invasion of Hungary, where hundreds of Hungarians were killed and thousands arrested.

The pro-Hungarian crowd at the Olympic pool saw numerous altercations and fights — including underwater headlocks — between the players. Late in the match, Ervin Zador, who had scored two goals for Hungary, was hit by Soviet player Valentin Prokopov and climbed out of the pool with blood streaming from his head. Spectators and Hungarian officials rushed toward the Russian team. Police and security intervened, escorting the Soviet team from the pool.

“I looked after Prokopov for the last few minutes, and I told him that he was a loser, and that his family were losers and so on,” Zador was later quoted as saying. “There was no problem until I made a huge error. I looked up to question why the referee had blown his whistle.

“I shouldn’t have taken my eye off Prokopov. The next thing I saw, he had his full upper body out of the water and he was swinging at my head with an open arm.”

The match, with a riot threatening to break out, was abandoned with about a minute left.

Hungary, the defending gold medalists, won 4-0 and went on to take gold again with a 2-1 win over Yugoslavia. Zador could not play in the final because of his injuries sustained against the Soviets.

The Blood in the Water match has since been the subject of several documentaries and films. One of them, called “Freedom’s Fury,” was co-produced by Tarantino, who directed “Pulp Fiction" and “Once Upon a Time in Hollywood.”

The narrator was nine-time Olympic gold medalist Mark Spitz, who was coached as a teenager by Zador. The Hungarian had moved to California after receiving American citizenship when he refused to return to Hungary.

The documentary includes scenes from the Hungarian Revolution. Eight Hungarian players, including Zador, and four ex-Soviets were interviewed for the film, which began in production in Budapest in 2002 and took nearly five years to complete.

“Both teams were as much a victim of the circumstances and really both countries were imprisoned by the same ideology,” Freedom’s Fury writer and director Colin Gray said. “These guys were able to finally reconnect as human beings and as fellow athletes. That was something that we really wanted to highlight, the sort of humanistic side to counter the sort of oppression of ideology that everyone had suffered under in the Eastern bloc.”

Gray played water polo for the University of Michigan under coach Ben Quittner, a former coach of the Hungarian national team who was a technical consultant for the film.

Zador died in California in 2012 at the age of 76. Five years later, two of his children, Erik and Christine, competed at the FINA World Masters Championships in Budapest. It was their first trip to their father’s birthplace. and they wanted to perform a special ceremony.

“Originally, we were just going over to compete,” Erik Zador told the Modesto Bee newspaper. “But then we thought we could spread his ashes while we were over there.”

He said they contacted world swimming government body FINA, and the organizing committee for the Masters games in Budapest was happy to carry out the family’s request.

The last two remaining Hungarian players from the 1956 game against the Soviets have died in the past two years.

Antal Bolvari, who scored a goal against the Soviets, died in January 2019 at the age of 86. Like about half of his teammates, Bolvari defected to the West after the Olympics, living in Australia for five years before returning to Hungary.

And in June of this year, a few months shy of 64 years since the game was played, Gyorgy Karpati, died at the age of 84. Karpati, who won Olympic gold medals in 1952, ‘56 and ’64, also scored a goal in that contentious win.

In 2002, Karpati told The Associated Press during filming of the documentary that he and his Hungarian teammates at the time considered the Soviet players symbols of an oppressive regime.

“In the strained political situation we were in, it was a body-to-body encounter with our opponents,” Karpati said. “Now I have to admit that I’m convinced even the referee was pulling for us. We were from a small country battling the huge Soviet Goliath.”