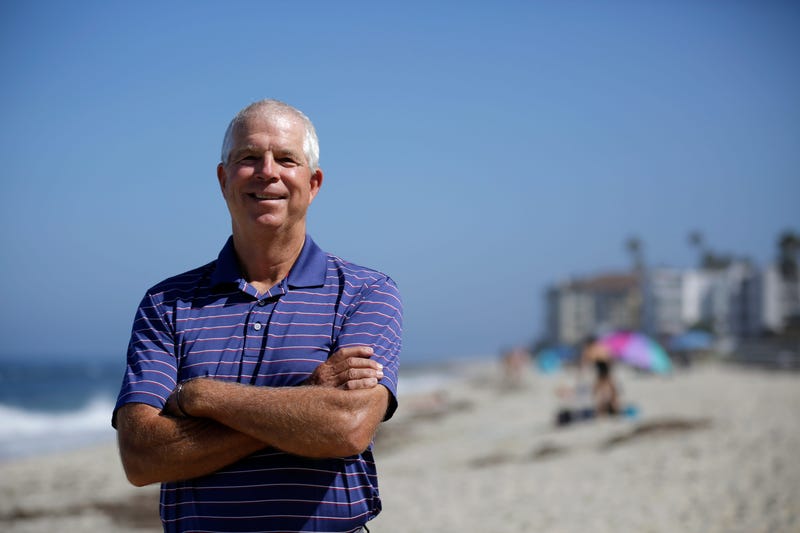 Photo credit Peter Schnugg stands for a portrait along the beach Friday, July 31, 2020, in San Diego. The former waterpolo athlete missed his chance to go to the Olympics in 1980 when the U.S. decided to boycott the games to protest the Soviet Union's invasion of Afghanistan. Now he's unsure if he'll get the chance to see his niece, Maggie Steffens, try for a third consecutive gold medal with the U.S. women's water polo team. (AP Photo/Gregory Bull)
By The Associated Press

CHICAGO (AP) — When the Tokyo Olympics was pushed back by the coronavirus pandemic, Peter Schnugg texted his niece, Maggie Steffens, to apologize. Schnugg had made plans to travel to Japan to watch Steffens try for a third consecutive gold medal with the U.S. women's water polo team.

Olympic disappointment just follows him around.

“I'm jinxed,” a chuckling Schnugg said. "I texted Maggie, I said 'I'm really sorry, I promise I won't go if they reschedule it.' She laughed.

Something Schnugg knows all too well when it comes to the Summer Games. He was one of the top water polo players in the world while starring at the University of California, but he never got a chance to play in the Olympics.

His last shot was taken out of his hands when the U.S. decided to boycott the 1980 Moscow Games to protest the Soviet Union’s invasion of Afghanistan.

Schnugg was on the board for the Athletes' Advisory Council to the U.S. Olympic Committee at the time, so he was part of the conversations in the run-up to the decision. And what happened had a long-lasting effect on him.

Schnugg, one of 13 siblings, is part of one of California's royal water polo families. His sister, Peggy, is married to Carlos Steffens. Another sister, Sarah, is married to Mike Loughlin. Peter Schnugg, Steffens and Loughlin all played together at Cal.

Maggie Steffens' older sister, Jessica, played alongside Peter Schnugg's daughter, Stephanie, in high school before winning two Olympic medals. Maggie was named MVP at the last two Olympics. She and Jessica were teammates in 2012, when the U.S. won gold.

Maggie Steffens said she had an idea about her uncle's playing career when she was growing up, but it came into a sharper focus when he addressed the U.S. women's team in the run-up to the 2016 Olympics.

“When he spoke to our team, I just, like my heart was swollen,” Steffens said. "I really, really felt for him.

“He talked about the phrase ‘Always finish strong, no matter what it is.’ ... He was one of the first people to text me personally after the 2016 Games and he said ‘Now that’s what you call finishing strong,' and that just meant the world to me."

Peter Schnugg, 69, played several sports while growing up in Orinda in Northern California. He was introduced to water polo as a teenager when his East Bay swim club hired Pete Cutino, who had just taken over the swimming program at nearby California.

Cutino is one of the most decorated water polo coaches of all time, winning eight national titles with the Bears.

“I was a reluctant swimmer,” Schnugg said in a video conference call from his home in La Jolla, California. “I preferred basketball, played baseball. And when I learned about water polo, that just seemed like just about the most perfect combination.”

Schnugg started training with the U.S. national team in 1971 and was an alternate for the 1972 team that won bronze at the Munich Olympics. That only fueled his hunger for water polo success.

He led Cutino and the Bears to their first NCAA title in 1973. He was one of America's best players with the 1976 Olympics coming up on the horizon, but the U.S. failed to qualify for Montreal.

Then came the boycott. Schnugg joined a group of athletes who went to U.S. District Court looking to overturn the move, but their lawsuit was dismissed when a judge ruled the USOC had the authority to make the decision.

That was it for Schnugg, who eventually decided to retire. When it comes to recognition for the 1980 team that never made it to the games, he has already heard from everyone that matters to him.

“We came from being, you know, nine through 12 in the world to one or two in the world, by the time the Olympics rolled around,” he said. "So it was a great journey. Really proud of what we did. That’s the part that was, for me, important.

Schnugg isn't sure if he will make his first appearance at the Olympics next year in Tokyo. He is concerned about traveling in the COVID-19 era.

For now, he can only imagine what it would be like to watch Maggie play at the event he pursued in his youth.

“Yeah, I’ll get nervous. You know, I'll get chills,” he said. “I get chills when they come out, they come marching out for the games. You know, it’s fun, it’s really fun. Brings back great memories.”

Jay Cohen can be reached at https://twitter.com/jcohenap