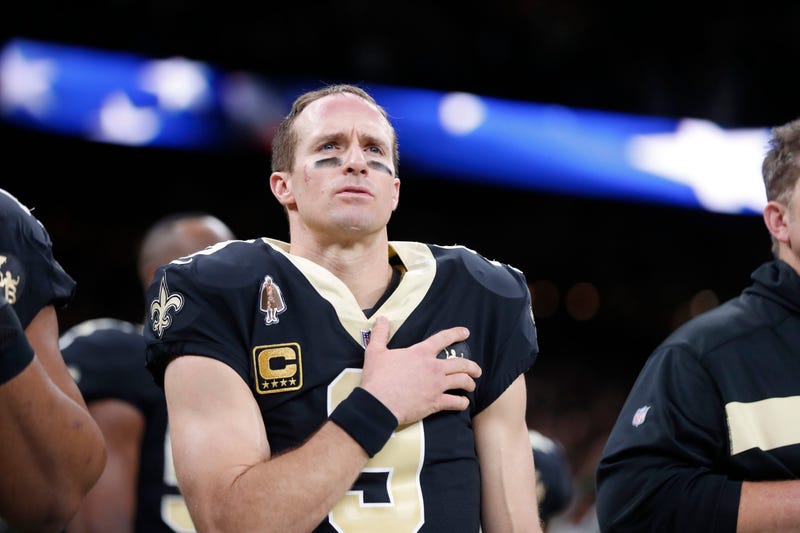 Photo credit FILE - In this Dec. 23, 2018, file photo, New Orleans Saints quarterback Drew Brees (9) holds his hand to his heart during the national anthem before an NFL football game against the Pittsburgh Steelers in New Orleans. The 41-year-old Brees, who is the NFL's all-time leader in yards passing, completions and touchdowns, is entering his 20th NFL season and 15th with the New Orleans Saints. (AP Photo/Gerald Herbert, File)
By The Associated Press

NEW ORLEANS (AP) — Saints quarterback Drew Brees says he'll remain standing for “The Star Spangled Banner,” but professed respect and support for those who protest racism and social injustice by kneeling during the national anthem.

“I’ll always stand for the flag because of what it means to me and to honor all those who have sacrificed, who have served and died for our country, and all those who have struggled to move this country forward,” Brees said Saturday in a conference call with reporters to discuss the onset of training camp.

“I acknowledge and respect anyone who chooses to kneel or any other form of peaceful protest to bring attention to social injustice and systemic racism that so many have endured and continue to endure in our country,” Brees continued, adding that he “always will support and advocate for Black and brown communities in the fight for social justice.”

The 41-year-old Brees, who is the NFL's all-time leader in yards passing, completions and touchdowns, is entering his 20th NFL season and 15th with the New Orleans Saints. He discussed not only reconciliation with teammates, but also how he has adapted to restrictions brought on by the coronavirus pandemic, new offseason training techniques aimed at improving long passes and even breaking his renowned finger-licking habit.

“Believe it or not, I'm telling you I have not licked my fingers in four months,” Brees said as he started to laugh.

“If I can break myself of the licking-the-fingers habit, then I think that means anybody can break themselves of any habit, because that was out of control,” he added, noting that he wouldn't just do it while throwing a football but also while turning pages in a book, or any activity that might be more efficient with tacky finger tips.

But before he even took a question, Brees opened the conference call with a statement about his introspection since early June, when he became seen by many as a symbol of white privilege for saying he would never approve of anyone disrespecting the flag by kneeling during the anthem. Those comments came while protests were proliferating across the country in response to a white Minneapolis police officer's video-recorded killing of George Floyd.

Brees faced a scathing backlash from several current and former Black teammates and other high-profile athletes such as LeBron James.

But the quarterback apologized soon afterward and said he realizes now that protesting by kneeling during the anthem, initiated by former San Francisco QB Colin Kaepernick in 2016, was never about the flag.

“To think for a second that New Orleans or the state of Louisiana, or the Black community would think I was not standing with them for social justice, that completely broke my heart. It was crushing. Never, ever would I feel that way,” Brees said Saturday in his opening statement.

“I recognize that I missed an opportunity that day. I had an opportunity to talk about and emphasize the social injustices that exist for our Black community and our need as country to support them and advocate for systemic change. And my lack of awareness in that moment hurt a lot of people.”

Brees added that he has had many conversations with teammates since then and particularly in recent days and that they have “reconciled and put closure on anything from the past, and we are moving forward to focusing on the issues of social justice.”

Brees singled out safety Malcolm Jenkins, who had been among his harshest critics, saying, "I am a friend of Malcolm. I am his teammate and I am his ally. There are many things that we’re having a conversation about working on together. All of our goals are aligned.”

At the same time, Brees emphasized that he is "the same person now that I have always been. ... I’m someone who feels a great sense of responsibility to serve and to lead and to bring true equality to everyone.”

Turning to football, Brees said the pandemic is forcing him to consider new ways of practicing leadership and promoting team chemistry.

He cited wearing monitors at team headquarters that flash red and beep when one is standing within six feet of another person as an example of how face-to-face contact has been affected.

Brees said he was able to travel to Denver for a few days to train with new receiver Emmanuel Sanders, but otherwise did much of his training in the backyard of his offseason home in the San Diego area. That's where he worked with throwing mechanics guru Tom House on improving passes of about 60 yards.

“We’ve applied a lot of different techniques and a lot of training methods,” Brees said. “There’s been some moments of discovery.”

Brees declined to say whether he views this season as his last, but he said he put a lot of thought into his decision to play this season, coming to the conclusion that he wanted to remain a part of a team he loves, which also happens to see itself as a Super Bowl favorite.

“Fair or not, I think we all agree that quarterbacks and head coaches in large part are evaluated on wins, losses, championships,” Brees said. “I came back for my team and I came back to chase that” championship.

"I’m going to enjoy every second of this journey and just value every moment.”