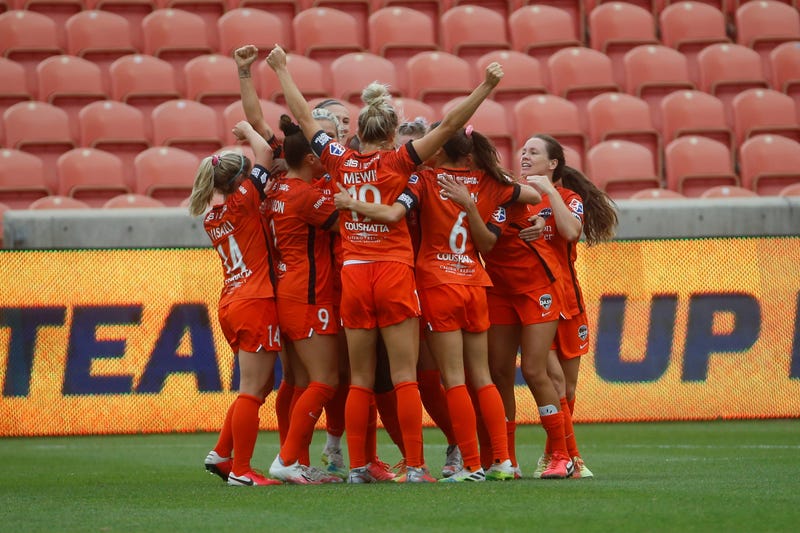 Photo credit Houston Dash forward Rachel Daly (3) celebrates with her teammates after scoring against the Portland Thorns during the second half of an NWSL Challenge Cup soccer semifinal match Wednesday, July 22, 2020, in Sandy, Utah. (AP Photo/Rick Bowmer)
By The Associated Press

SANDY, Utah (AP) — Rachel Daly scored on a header in the 69th minute and the Houston Dash advanced to the Challenge Cup title game with a 1-0 victory over the Portland Thorns on Wednesday.

The fourth-seeded Dash, the highest remaining seed in the tournament, had never been to the playoffs in seven years in the National Women’s Soccer League.

The Dash will take on the Chicago Red Stars, who won the late semifinal game 3-2 over Sky Blue, in the championship on Sunday.

“It's the best feeling in the world. This team is phenomenal, it's just such a special team. We talked a lot about the identity of the team,” Daly said. “You know what? I think everywhere in the world is struggling right now with this pandemic and the city of Houston is going through a really tough time. And I think for us, it was for them."

Nichelle Prince broke away in a sprint toward Portland's goal in the opening half Wednesday but she was caught by defender Emily Menges. Daly had the lone shot on goal for the Dash in the scoreless half.

Prince had another great opportunity in the 62nd minute but Portland goalkeeper Britt Eckerstrom punched it away.

Daly finally broke through with her rebound goal that bounced off Eckerstom's back and into the net. It was Daly's third goal of the tournament and ended a three-match shutout for the Dash.

Houston had advanced to the semifinals after a penalty shootout with the Utah Royals. Two other quarterfinal matches were also decided by penalties.

“I thought we played really well collectively. And it’s nice to score a goal in open play and not have to rely on penalty shootouts," Dash coach James Clarkson said. “So, very happy, but all the praise and everything goes to the players because they were magnificent.”

Portland went into the tournament with an 11-2-3 advantage all-time against the Dash.

Thorns coach Mark Parsons said the match was a "below-average performance" from his team, but he was pleased with the Thorns over the course of the tournament overall.

“We have not only strengthened and raised the standard of our culture. We also took massive leaps in our style of play, in how we want to represent ourselves on the field, playing the game that is tough to play against -- an attacking team that wants to be on the front foot, that wants to control and create chances," Parsons said. ”We were very clear that the outcome of the tournament wasn’t going to define success."

Portland advanced to the semifinals by knocking off top-seeded North Carolina, the two-time defending league champions, in the quarterfinals. But the Thorns, who won league titles in 2013 and 2017, were hampered by injuries throughout the Challenge Cup.

Starting goalkeeper Adrianna Franch didn't play because of a knee injury, and defender Becky Sauerbrunn hadn't played since the opener because of a hip injury. The Thorns on Wednesday were also without midfielder Lindsey Horan, who was questionable going into the game with a hip injury.

Portland was also down to the team's third goalkeeper. Eckerstrom started the last two games after Bella Bixby suffered an ACL injury and headed home. As a result, goalkeeping coach Nadine Angerer, the former German national team goalkeeper and FIFA player of the year, was on Portland's bench as a backup.