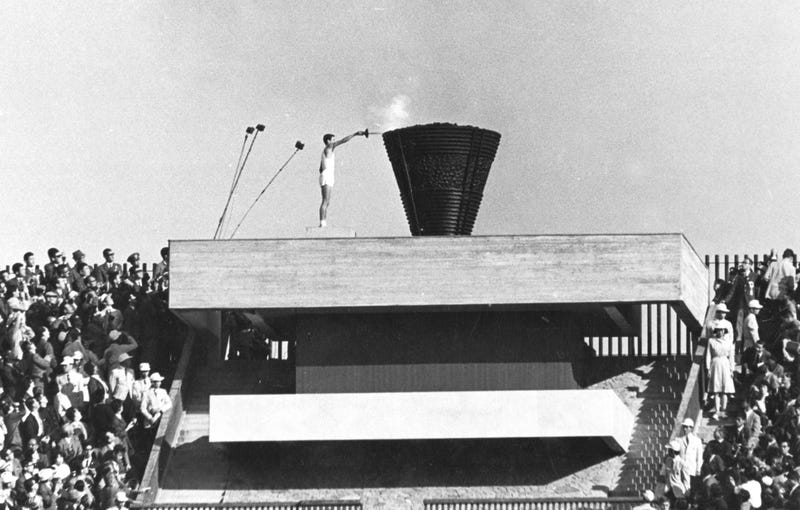 TOKYO (AP) — Yoshinori Sakai was born in Hiroshima on Aug. 6, 1945, the day the United States dropped an atomic bomb on the city.

Just over 19 years later, he ran with the Olympic flame into the national stadium, left the cinder track, and jogged up a long flight of flower-lined stairs to reach the top.

Wearing a white singlet with the rising sun emblem on his chest, he held the torch high in his right hand, faced the cauldron and lowered the flame to set off a ball of fire that signaled Tokyo's 1964 Olympics were set to begin — and Japan was back from the ashes of World War II.

Sakai died almost six years ago and, though a world-class runner, he never competed in the Olympics. But he is forever immortalized in thousands of photos of him carrying the torch, and a color one on the cover of the U.S. magazine Sports Illustrated.

“Tokyo 1964: The Olympics Begin,”read the banner above Sakai's photo.

Along with Rome in 1960, Tokyo was probably the first modern Olympics. It was the first to be shown internationally using communication satellites. It also featured the first Olympic wedding, when Bulgarian teammates Nikolai Prodanov and Diana Yorgova were married during the Games.

WITCHES OF THE ORIENT

So many highlights. For Japan it might have been the women’s volleyball team — known as the “Witches of the Orient”— winning gold in an impassioned final against the Soviet Union.

The biggest shock may have been Billy Mills. Born on the Pine Ridge Indian Reservation in South Dakota, Mills won the 10,000 meters, still the only American to ever win the race.

The Yoyogi National Stadium was the gem of the '64 Games. Built by the late-architect Kenzo Tange, the masterpiece was the venue for swimming and is slated to be used for handball next year in Tokyo. The soaring roof line of Tange’s jewel still defines modern architecture. The stadium’s sweeping roof is anchored to earth by steel cables, like a suspension bridge, and mixes the modern with traditional forms found in Japanese temples and shrines.

It was built in a time before computer graphics or computer modeling. Tange used only a slide rule and his imagination. Many have described it as one of the most important buildings of the 20th century and the pinnacle of modern architecture.

Nothing showed Japan's recovery from the war better than the country's famous Bullet Trains — Shinkansen in Japanese. They started running just a few days before the Olympics opened on a line from Tokyo to Osaka. The high-speed train — built to impress the world with Japanese technology — also showed the underbelly of the Olympics: excessive spending.

The Shinkansen project is widely reported to have cost twice what was forecast. The rush to build overhead highways and modernize the city also wrecked many views around Tokyo. One such highway was built over the Meji Era bridge at Nihonbashi. The overhead highway still stands as an eyesore from the '64 building spree, and there is talk of replacing it.

“In fact, Tokyo 1964 remained the most expensive Olympic ever, when corrected for inflation, and on a per athlete basis, until Beijing 2008,” Olympic historian Dr. Bill Mallon said.

READ ALL ABOUT IT

Roy Tomizawa, a third generation Japanese American, has just published a book on the Tokyo Games, titled: “1964 — The Greatest Year in the History of Japan: How the Tokyo Olympics Symbolized Japan’s Miraculous Rise from the Ashes.”

Tomizawa, who grew up in New York and has worked for 20 years in Japan, interviewed 70 Olympians from 16 nations. The book was inspired by his father, Thomas Tomizawa, who worked as an editor during the Games for NBC.

“I think the Olympians tell more of the story of the games themselves and their reaction to what they saw of Japan,” Tomizawa said in an interview with The Associated Press. “Some had been to Japan in ’50s and ’60s. I think everyone was surprised and shocked when they arrived in Japan thinking it would be a backward economy.”

They were also taken aback by the nature of the Japanese.

“For the Canadians, the Australians, the Americans, the Brits — it was the brutal enemy,” Tomizawa said. “When they came they were welcomed and given such help and support and cheering. It was a surprise to all of them.”