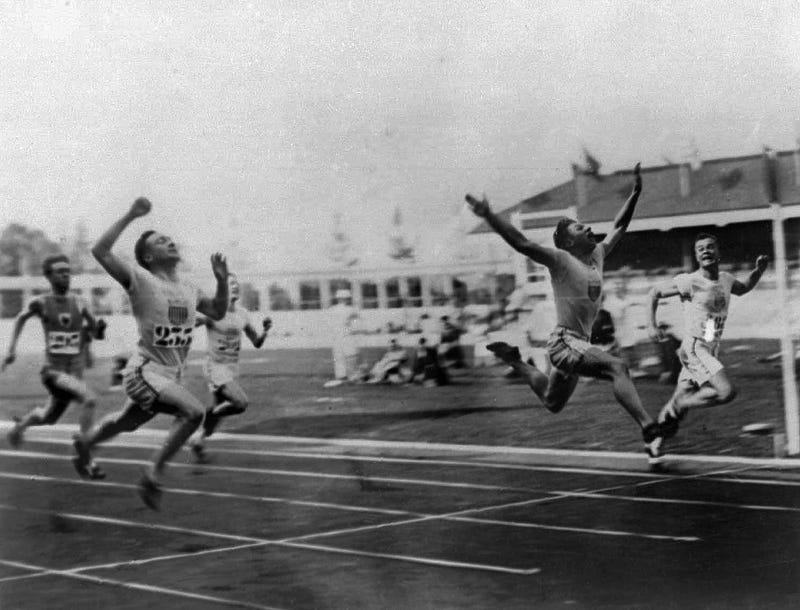 Photo credit FILE - In this 1920 file photo, Charles (Charley) Paddock, second from right, of the USA wins the 100 meters final with his famous "flying finish" at the 1920 Summer Olympics in Antwerp, Belgium. Morris Kirksey, far right, of the USA was second, and Jackson Scholz of USA, left, was fourth. Third place Harry Edward not shown. (AP Photo/File)
By The Associated Press

DÜSSELDORF, Germany (AP) — Olympic athletes competing for gold medals in a world reeling from a pandemic? It won't be the first time.

A century before the Tokyo Games were postponed because of coronavirus, the Olympics were held in the Belgian city of Antwerp following the Spanish flu pandemic.

The 1920 Games were meant to symbolize a recovery from World War I, not a health crisis. Belgium, a battleground for the opposing powers, was the host country and the five rings of the Olympic flag flew at an opening ceremony for the first time.

“They released doves, although these were not necessarily doves of peace, because these were doves which had served in the war and they were released by military men,” Roland Renson, a Belgian sports historian, told The Associated Press.

Both the pandemic and the war were epitomized by Aileen Riggin, a 14-year-old American diver who won a gold medal.

Riggin first took up competitive swimming after becoming sick with the Spanish flu, and she went on a tour of a World War I battlefield after winning gold in the 3-meter springboard. She took a German helmet and some bullets as souvenirs, but got a shock when she examined one of the many boots lying in the churned-up mud.

“I picked up one that had a foot in it, so I dropped it in a hurry,” she recalled later.

The coronavirus has blocked Antwerp’s attempt to mark the centenary. A ceremony in March due to feature the King of Belgium and the president of the International Olympic Committee was canceled.

Despite taking place in the wake of a major war, reconciliation at the Antwerp Olympics had its limits. Germany and its wartime allies didn’t compete, nor did Bolshevik-controlled Russia. They weren’t officially banned, simply not invited. One Swedish figure skater (then in the Summer Olympics before the Winter Games started in 1924) was reportedly forbidden from performing to German music.

There were financial problems, too. Ingenious shortcuts like making a pool from a ditch in the city fortifications — Riggin and other athletes hated the cold, dark water — helped keep costs down, but the Belgian organizing committee still lost money and left behind unpaid debt.

“Antwerp has never cherished its Olympic heritage because of the debacle,” Renson said.

The postponement of the Tokyo Olympics to 2021 is estimated to cost Japan at least $2 billion.

The Spanish flu swept around the world from 1918 until early 1920, killing an estimated 50 million people, though war and poverty made a precise count impossible.

Older people make up a large share of the coronavirus death toll, but the Spanish flu was a particular threat to younger people. That included the soldiers gathered in often squalid conditions as WWI ended. The flu-infected troops in France and Belgium and then hitched a ride when they were demobilized. Parties to welcome soldiers home became infection hot spots.

Seven Olympic athletes are believed to have died from the Spanish flu, according to records provided by Olympic historian and physician Bill Mallon.

They include three WWI veterans as well as Martin Sheridan, a New York policeman who was born in Ireland and won gold medals for the United States in the discus and shot put over multiple early Olympics.

“This flag dips to no earthly king,” Sheridan reportedly said at the 1908 London Olympics when the U.S. team refused to lower its flag in a sign of respect to the British royal family. The comment was first published decades later and its veracity is disputed, but the United States continues the tradition of not dipping the flag at Olympic ceremonies.

Mallon and other researchers have identified 48 cases of COVID-19 among Olympians, with 19 deaths attributed to the disease.

For Belgium, the Spanish flu was another setback to rebuilding after the devastation of WWI. However, Renson said he has not found any direct impact from the pandemic on Olympic preparations.

The Antwerp Olympics were meant to mark new beginnings, but many traditions from before the war remained.

Athletes had to be amateurs, but that rule often meant mediocre competitions between wealthy gentlemen. Working-class people were alienated and many events were poorly attended, with the exception of soccer.

Belgians loved cycling but snubbed the Olympic races for more exciting professional events, Renson said. Some sailing classes had only one entry, meaning the crew simply had to finish to earn a gold medal.

Times were changing, though. It was the Olympic debut for Finnish distance runner Paavo Nurmi, whose scientific approach to training and race strategy helped him to nine gold medals in his career, including three in Antwerp. Sports were increasingly a full-time occupation, even if that meant bending the rules on amateurism.

“The American rowing team, these were all Navy men and they trained every day. So you can ask questions whether they were amateurs or not,” Renson said. “Amateurism was a means to exclude working-class people, simple as that. Paavo Nurmi was not a saint. He was a pure professional.”

Many Olympic champions from 1920 are little remembered today, but the games were a symbolic resurrection of sports in adversity.

“In a minimum of time, they organized the games, but they were relatively improvised games,” Renson said. “They had to do it with the means they had at their disposal, and they were at that time far from abundant in a city so heavily hit by war.”