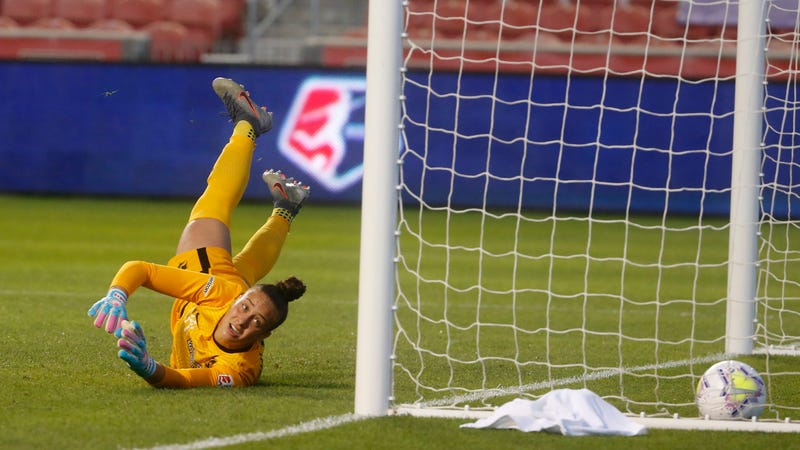 Photo credit Sky Blue goalkeeper Kailen Sheridan is scored upon by the Chicago Red Stars in the first half of an NWSL Challenge Cup soccer semifinal match Wednesday, July 22, 2020, in Sandy, Utah. (AP Photo/Rick Bowmer)
By The Associated Press

The Red Stars, who played last year in the National Women's Soccer League championship game but fell to the North Carolina, will meet the Houston Dash on Sunday in the tournament's title game.

The Dash, who had never made the playoffs in seven seasons in the league, defeated the Portland Thorns 1-0 in the earlier semifinal.

The sixth-seeded Red Stars built a 3-0 lead in the game but No. 7 Sky Blue scored a pair of goals late.

The match had looked like it could be a battle of the goalkeepers after both teams went scoreless in the quarterfinals and advanced to the semis on penalty shootouts.

Sky Blue goalkeeper Kailen Sheridan went into the game leading the field with 20 saves in the tournament. Chicago counterpart Alyssa Naeher had 18 saves, but rested for a game during the group stage.

St. Georges got past Sheridan early, finding her out of place with a shot to the far post in the eighth minute. It was her first professional goal.

Some three minutes later Hill, who was traded to Chicago from the Orlando Pride in the offseason, scored.

Savannah McCaskill scored on the counter to pad the Red Stars' lead in the 60th minute.

But Sky Blue closed the gap on rookie Evelyne Viens' header in the 72nd minute, and some five minutes later an own goal got the New Jersey team closer.

The Red Stars did not start Casey Short, who had one of the Chicago's two goals heading into Wednesday night's semifinal. The team announced shortly before kickoff that she had picked up an injury in training the day before.