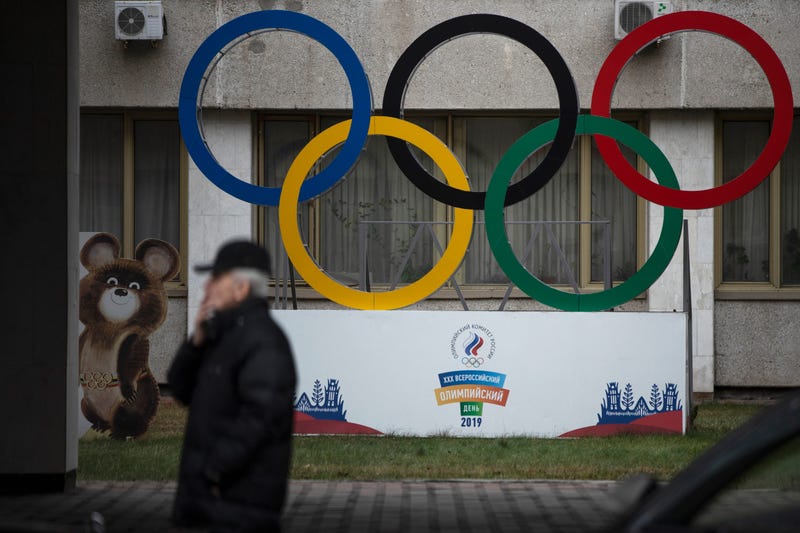 Photo credit FILE - In this Nov. 28, 2019 file photo Olympic Rings and a model of Misha the Bear Cub, the mascot of the Moscow 1980 Olympic Games, left, are seen in the yard of Russian Olympic Committee building in Moscow, Russia. A U.S. government study concludes that Americans do not get their money’s worth out of the $2.7 million that Congress sent to the World Anti-Doping Agency this year. The report from the White House Office of National Drug Control Policy concludes that the U.S. is under-represented on WADA’s key policymaking committees. It says WADA has not moved quickly or far enough to reform itself in the wake of the Russian doping scandal. (AP Photo/Pavel Golovkin, file)
By The Associated Press

A U.S. government study concludes Americans don't get their money's worth out of the $2.7 million that Congress provided the World Anti-Doping Agency this year and suggests future funding be contingent on changes in the drug-fighting agency's policies.

The 19-page report by the White House Office of National Drug Control Policy concludes that the U.S. is underrepresented on WADA's key policy-making committees, that WADA has not moved urgently enough to reform itself in the wake of the Russian doping scandal and that Congress should consider giving the office discretion to withhold future funding.

“This report reveals that WADA is, at a minimum, incompetent when dealing with serious, endemic corruption, and that it disregards even its own investigators to protect its bottom line,” said Jim Walden, the attorney for Russian whistleblower Grigory Rodchenkov.

WADA spokesman James Fitzgerald disputed the report, saying it was “very unfortunate that the report was written without due regard for the facts or context and with the clear intention to discredit WADA.” The agency is working on a full response to deliver to Congress.

Congress asked for a report on WADA's operation when it approved the funding for the agency as part of this year's appropriations bill. WADA's annual budget of $37.4 million is funded half by governments across the world and half by the International Olympic Committee. Of the nearly 200 governments that pay, the U.S. gives more than double all of them except Japan and Canada.

The U.S. contribution, Fitzgerald said, is part of a regional funding formula that the U.S. helped develop in concert with other countries in the Americas.

“The funding model is not the issue,” said Travis Tygart, the CEO of the U.S. Anti-Doping Agency. “The report makes clear that the issues are with WADA’s broken governance, lack of democracy and transparency, and (its habit of) keeping athletes' voices and any U.S. influence out of decision-making process.”

The report recounts key moments in WADA's handling of the Russian cheating saga, which has upended the Olympic movement since details were first revealed in the aftermath of the 2014 Sochi Olympics.

The response to the scandal, the report concludes, “continues to demonstrate inadequacies in WADA’s independence and capacity to ... hold major countries accountable under the rules and uphold the expectations of clean athletes.”

While the U.S. government accounts for 7.2% of WADA's annual budget, it currently has no seats on the 12-person executive committee, which guides policy discussions. And of the 59 available positions on WADA's six key policy-making panels, the U.S. holds one seat, which belongs to former sprinter Lauryn Williams, who is not a government representative. (Edwin Moses was a longtime chair of the Education Committee, but his tenure ended last year.) The government has one seat on WADA's 39-person foundation board, which mainly serves to rubber-stamp policies hashed out in the executive committee.

But WADA says the U.S. is “one of a small handful of countries” to have representation on the foundation board throughout the entirety of the agency's 20-year history. It said for seven of the past 14 years, a U.S. government representative has, in fact, served on the executive committee, and that the U.S. did not attend a meeting earlier this year to discuss representation for the Americas region on WADA committees. Tygart said the U.S. didn't attend the meeting because it doesn't have a sports minister, the way most countries do, and previous meetings haven't resulted in productive outcomes for the U.S. sports movement.

The report comes as the Senate considers a bill that would strengthen U.S. law enforcement's role in combating drugs in sports. The Rodchenkov Act has passed through both the full House and a Senate committee on voice votes and is awaiting action in the full Senate. WADA has lobbied for extensive changes in the bill, arguing it would undermine the international anti-doping system by putting too much power in the hands of U.S. law enforcement.

The report makes no specific mention of the bill, but serves to underscore what appears to be a growing gulf between WADA and the government that provides the largest portion of its funding.

“Everything they pointed out (in the report) is exactly why we need the bill,” Walden said.