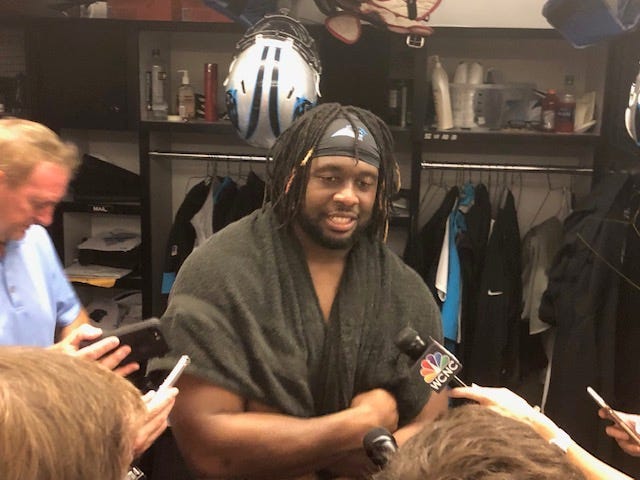 Panthers defensive lineman Gerald McCoy has said numerous times this off season that he didn't sign with Carolina to get back at his old team, the Tampa Bay Bucaneers, for cutting him.

However, despite McCoy's continued denials, it seems like media, fans, and McCoy's own teammates are saying that Thursday's contest at Bank of America Stadium is the first of McCoy's two "Revenge Games" this season for him.

McCoy was released on May 20th by the Bucs on the heels of a sixth straight Pro Bowl for the 10-year veteran.

Despite the breakup with the only team he's known since being drafted by Tampa in 2010, McCoy has taken the high road and has embraced the fact that his departure was for the best.

Three days later after his release, Tampa signed Ndamukong Suh as a replacement and quickly gave Suh his old No. 93.

People again tried to use this an opportunity to provoke McCoy into anger against his old team.

"At first, it bothered me, but the more I think about it ... whatever," he said. "I still wear my old number."

In training camp, McCoy was adamant that he signed with Carolina because he felt like the Panthers could represent the NFC in Super Bowl LIV, not because they play Tampa twice a year.

McCoy said his biggest focus this week is making sure his current team doesn't fall in a 0-2 hole to start the year, putting those aspirations to a Super Bowl trip to Miami behind 8-ball.

"I haven't done that a lot in my career, " McCoy said.  "We have a really good team here. You never want to turn one bad loss into two. We've got to make sure we go out and play well Thursday."

If McCoy gets his wish, watching his old team walk out of Bank of America Stadium 0-2 and having that bragging right temporarily will be enough satisfaction for him.

But he also said he shares that feeling for any team trying to keep him from that elusive Lombardi Trophy.

James Bradberry Hoping To Shutout Mike Evans Again
One of the few positives in the Panthers loss to the Rams was the play of fourth-year corner James Bradberry, who recorded a sack and an interception against Los Angeles quarterback Jared Goff.
USA Today Images

Bradberry lifted himself into the team record book with that peformance, becoming just the eighth Panther to register each in a single game.

Bradberry, a quiet and reserved individual for most of his Panthers career, drew the praise of Rams head coach Sean McVay after the game as the two teams came together at midfield.

McVay even went out of his way to seek out Bradberry and called his first interception of the season, "a heck of a play," which schocked the cornerback.

"I was just surprised he knew my name," Bradberry said.

If he blankets Bucs Mike Evans and shuts out another high profile wide receiver for a second week in a row, more and more people are going to know James Bradberry's name.

Bradberry has already tied his interception total from a year ago with one, and added two pass breakups against Los Angeles.

Head coach Ron Rivera has seen a huge step forward from the 26-year old defensive back.

"I thought he played with good vision," Rivera said. "He made himself very aware of what was going on around him, and that's a huge plus. With James' length and quickness, he can make plays. I think he's going to continue to be a good player for us."

In two games last year against Evans, Bradberry held the two-time Pro Bowler for a total of five catches for 64 yards.

Bradberry said Evans keeps him at the top of his game.

"You try to get your hands on him, otherwise he's going to have free access," Bradberry said in an interview with WFNZ. "You really have to take the deep ball away from him."

Bradberry and the rest of the secondary go into Thursday night ranked 8th against the pass. The Rams only got 183 yards through the air.

The unit could be on the prowl for picks, yet again, as Tampa quarterback Jameis Winston has been prone to turnovers his entire career. The Bucs QB passed for just 194 yards, one touchdown, but threw three interceptions against the San Francisco 49ers in their Week 1 loss.

Notes
LB Bruce Irvin (hamstring) will miss his second straight game for this Panthers defense, meaning rookie Brian Burns will start. While Burns excelled in pass rushing situations, nearly strip-sacking Goff, the Rams did have some success running at him. Carolina is expected to debut its new 3-4 defense for the first time, as the team was forced to go base 4-3 due to the look the Rams gave Carolina on offense.
TE Greg Olsen (back) and DB Rashaan Gaulden (groin) were each listed as questionable for Thursday's game. Olsen told reporters that he would be playing. Olsen had four catches for 36 yards in Week 1, and drew nine targets from Cam Newton. If Olsen were unable to play, second-year tight end Ian Thomas would step up in his role. Thomas, however, logged just four snaps against Los Angeles.
Rookie OT Greg Little was removed from the concussion protocol and could to see his first NFL action. Left tackle Daryl Williams and right tackle Taylor Moton will likely remain entrenched in their tackle spots.

*The Panthers have done very well against Tampa in Charlotte. They have defeated the Bucs five out of the last six games at Bank of America Stadium, with the average margin of victory at 13 points. Carolina is also 3-1 against Tampa Bay in primetime games.