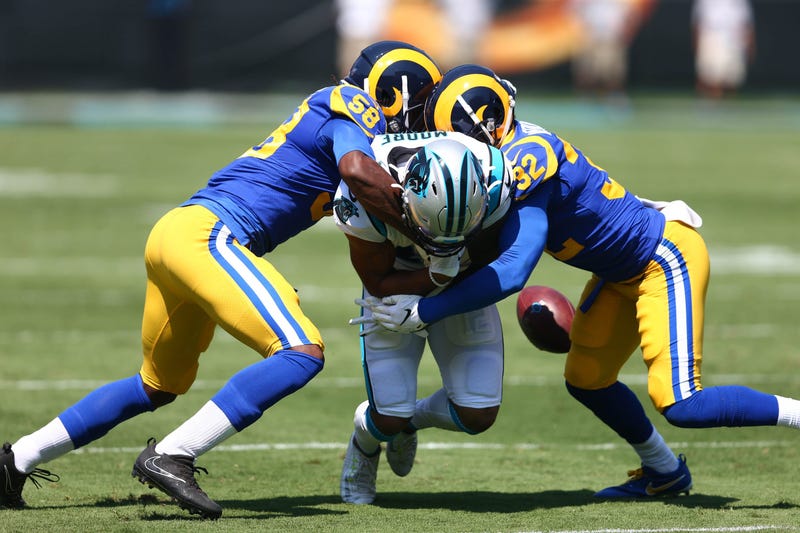 The Carolina Panthers may have started their 2019 season on a sour note, but you weren't getting any grapes from them after a 30-27 loss to the defending NFC champion LA Rams.

In fact, teammates said that Sunday's story should have had a different ending.

"We played a great team, but we left more than three points out there,” quarterback Cam Newton said. “That's what it comes down to."

Time ran out on Ron Rivera's squad after a failed onside-kick late in the 4th quarter. But what doomed Carolina were big mistakes in the first half, which put the Panthers in an early hole.

Getting the ball first to start the game, the Panthers drove past midfield after consecutive passes to DJ Moore, as Carolina looked to draw first blood.

But as Moore was trying to scurry past two defenders, the second-year receiver fumbled at the Rams 30 and gave the ball to LA, essentially giving it the ball to start the game and second half.

The Rams were forced to punt, but it was still an opportunity that the Panthers let slip away to strike first.

And as the second quarter opened up, the Panthers yet again shot themselves in the foot.

Trailing 3-0 after a Greg Zuerlein 49-yard field goal and backed up on their own 15, Newton once again tried to find Moore on a swing pass to the outside, but the pass went behind Moore and the Rams jumped on the ruled fumble.
Two plays later, Malcolm Brown found the end zone from five yards out to make it 10-0 with 12:50 left in the first half.

Moore said those series of mistakes left a real bad taste in their mouths before mounting their second-half comeback.

"It's real frustrating," he said. "We were coming back... we had big plays all across the field from (Christian McCaffrey), me, to Curtis (Samuel), to (Jarius) Wright. Everybody had a hand in making a comeback."

Moore, who battled a two-fumble game his rookie year against the Washington Redskins, said he did his best to try and put those miscues behind him.

"You just have to come back like I did and play with better ball security throughout the game. That's the only thing you can do."

Since 2015, Carolina is fifth in the NFL with a +18 turnover margin and are second in the league in that stretch with 380 points off turnovers.

The Panthers finished minus-2 in the turnover margin on Sunday.

"If you always win the turnover battle, you have a higher chance of winning the game," linebacker Shaq Thompson said. "Kudos to them."

Both the offense and the defense agreed that the sloppy play needs to be left here and now.

As the Panthers dug themselves into that 13-3 halftime deficit, the only way Carolina was going to get back into the game was with Cam Newton leading that second-half comeback throwing the ball.

Newton finished Sunday's action 25-of-38 for 239 yards, but threw a costly fourth-quarter interception to Corey Littleton as he was trying to find Greg Olsen over the middle.

Newton, who had shoulder surgery in the off-season and injured his foot in the team's third preseason game (his only action in the preseason), wasn’t on the Panthers injury report this week and appeared to be at full health.

Newton confirmed that level of health postgame and said that he's felt as good as he's had in years.

"That's what I'm the most optimistic about," Newton said. "Being able to gauge the throw. My body feels fine and you know whatever play was called, I felt confident. I didn't even think about my shoulder at any point."

Despite Newton's thumbs-up, the game plan still has a lot of people questioning whether Newton's shoulder is indeed as healthy as he claims.

Panthers receivers had catches of 17 yards (McCaffrey), 15 (Moore), 14 (Olsen) and 16 (Samuel), but a lot of those numbers came from yards after the catch.

So, if Newton's shoulder is indeed healthy, why didn't Carolina stretch the field and throw the ball downfield?

The Panthers QB said the game plan - along with what the Rams were showing him - didn't allow it.

"I'm not going to get into any philosophical discussion about throwing the ball downfield because that's not what this game is about," he said. "I took what the defense gave me.

"You don't call plays. You don't say to the coach, 'Let's throw the ball deep and see what that gets us.’ That's not our mentality."

Rivera said he saw nothing wrong with his star QB and doesn't foresee his shoulder issues coming back.

"I thought he did some really good things,” he said. “He drove us down when we needed to get some points on the board. We had a couple of turnovers that hurt us. When you get opportunities you have to capitalize.