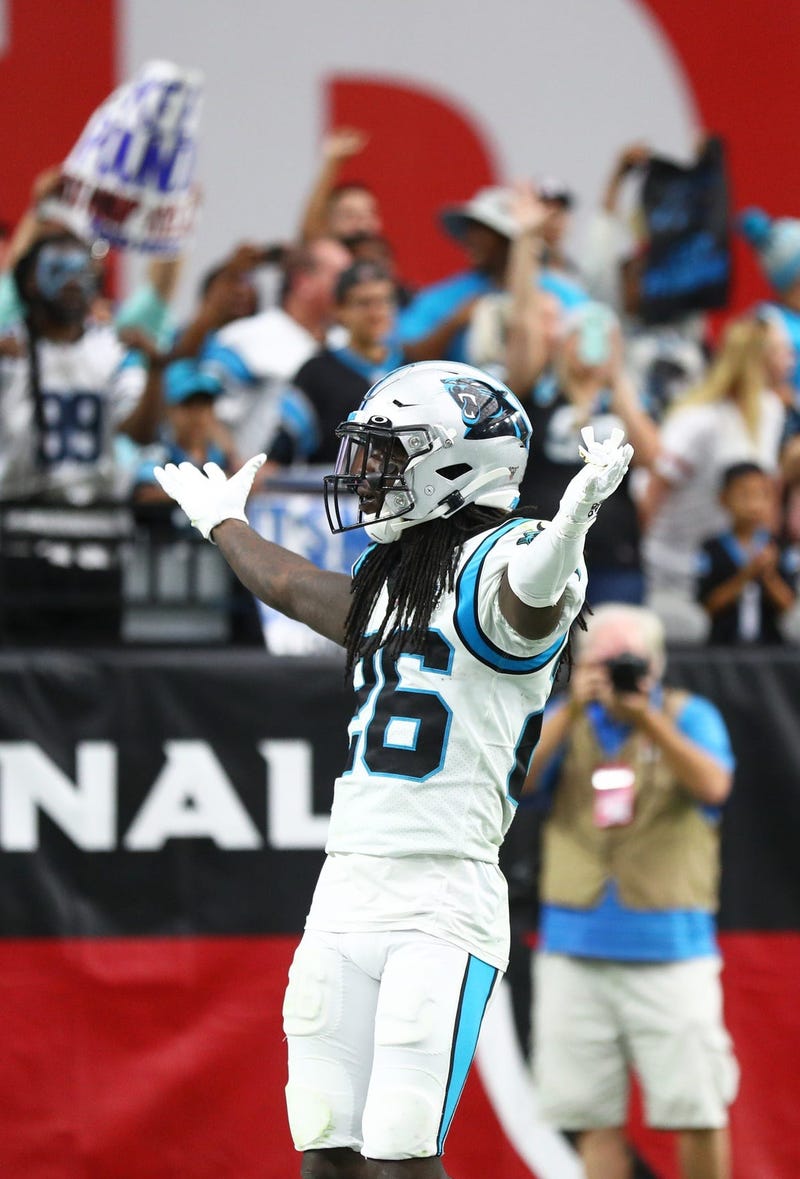 Donte Jackson with a hilarious Kirk Cousins impression after a two-interception day -- pic.twitter.com/JPChvNyGEl

That was the exclamation of Carolina cornerback Donte Jackson yelling at reporters as he made his way into the locker room following the Panthers’ 38-20 win over the Arizona Cardinals.

Once made famous by former Washington and current Minnesota quarterback Kirk Cousins in 2016 after orchestrating the largest comeback in Redskins history, the second-year defender for the Panthers did his best to prevent such a comeback from Cardinals rookie quarterback Kyler Murray.
Just ten days after Tampa Bay wide receiver Chris Godwin went over 100 yards in coverage against Jackson, the former LSU Tiger rebounded with two key interceptions of Murray late in the second half to help get his team their first win of the season.
After Christian McCaffrey's 76-yard touchdown run to give Carolina a lead 28-20 near the end of the third quarter, Murray tried to connect with his Hall of Fame wide receiver Larry Fitzgerald. but instead Jackson came up with his first interception of the young season and took it deep into Cardinal territory.

The interception led to another Panthers score to go up 35-20 - thanks to Kyle Allen's fourth touchdown of the day.

It didn't take long for Jackson to make his impact, yet again.

Backed up on their own 5-yard line with 4:51 left in the game, Murray again tried to test Jackson.

Another rookie mistake for Murray.

Jackson leaped up high for Murray's pass, and effectively sealed the victory for the Panthers.
© Mark J. Rebilas

Jackson's six interceptions since the start of his rookie year in 2018 lead the team.

It also marks consecutive seasons in which Jackson has grabbed two interceptions in a single game.

Jackson picked off Andy Dalton twice nearly a year ago in a 31-21 victory over the Cincinnati Bengals.

"It’s a huge step,” Rivera said. “I like to tell him, ‘As long as you play disciplined and keep your eyes in the right spot, you’ll get opportunities to make plays.’ And that’s what he did.”

Jackson gave a lot of credit for his play to his teammates up front on the defensive line, who harassed Murray to the tune of eight sacks and numerous pressures.

“That’s where the most credit goes,” he said. “All week we were flawless at practice. The rush and the secondary were working together, and everything was clicking. It was just a great week of practice, so we kind of already knew that we were going to come out here and execute, because we were just flawless all week. That rush, that was the reason for those two picks. I give the credit to those guys."

What’s the most important thing Rivera is looking for the rest of the way out of Jackson?

"That’s of the biggest importance, to get him to play consistently. That’s what you want,” Rivera said. “You want him to play his game. He’s got that kind of skillset. He showed you today with two interceptions. He’s a young guy and he’s easy to influence."

“We need to keep him on the straight and narrow."

Jackson currently has six career interceptions, which leads the team since the start of the 2018 season.