Week 8 of the 2020 NFL season is offering some great content in the revenge department.

The most obvious story line is that of new Kansas City Chiefs running back Le'Veon Bell playing against the New York Jets, the team he just departed after a very unsatisfying, unpleasant one-and-a-half-year stint. It took only minutes for Bell to publicly react to the news of his release from New York.

And if you couldn't tell from his other tweets, he's pretty happy to be donning Chiefs red — and winning — even in a role that may not feature him as prominently as would be the case with other teams.

Fresh start, feels good... ❄️ thankful to be a part of this organization. On to the next. pic.twitter.com/u1ThOf1mT8

But it's not just Bell whose revenge story line is playing an active role in shaping Week 8. Seattle Seahawks running back Carlos Hyde, who spent four season with the San Francisco 49ers after they selected him in the second round of the 2014 draft, will get his first chance to play against his former team. What's more is that Chris Carson is week-to-week with a foot sprain, which means Hyde could get a chance as the feature back. However, he is impeded by an injury of his own, as he's dealing with hamstring tightness, which could derail an otherwise entertaining clash.

Though the Detroit Lions and the Minnesota Vikings don't play until Week 9, a trade with hints of revenge came to a conclusion yesterday when the Dallas Cowboys sent Everson Griffen to Detroit. Griffen broke off contract talks with the Vikings, his former team, this past offseason and decided to look elsewhere.

Because of COVID-19 protocols, Everson Griffen won't be available Sunday against the #Colts.

That means Griffen's #Lions debut will be Nov. 8 against ... the #Vikings.

And though the Cowboys don't play the Baltimore Ravens until December, there's potential for a ton of intrigue despite the former struggling mightily this season and the latter acting like a Super Bowl contender. That's because Dez Bryant just signed with the Ravens' practice squad, and should all go as planned, he could be on the field when that Week 13 matchup goes down.

With all these tastes of revenge making the NFL community salivate for what's to come, let's take a look at five notable players who thrived in games where they faced their former teams. 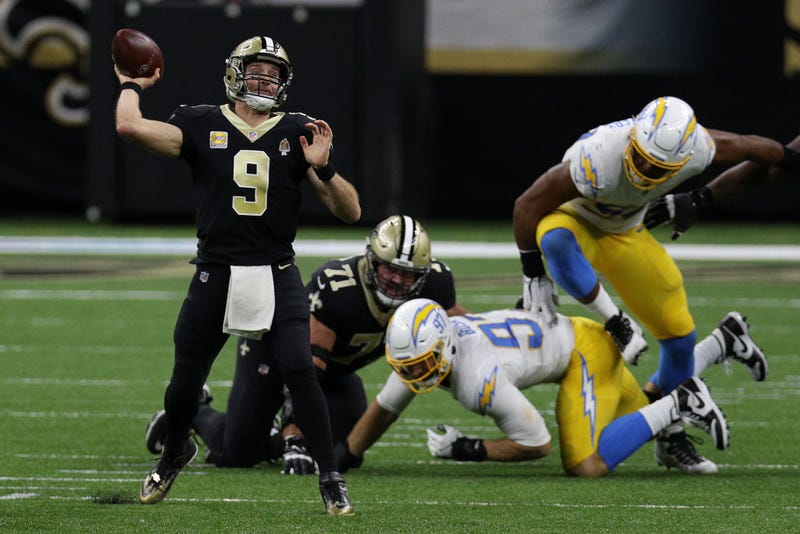 The Chargers' decision to move on from Drew Brees is one that will always be scrutinized, though several accounts, including that of John Gennaro of SBNation, put it sensibly given Brees' apparently serious injury to end the 2005 season.

Hindsight bias aside, whether or not it was the right move is beside the point here. What's relevant is that the Chargers simply can't defeat Brees and the Saints. In fact, the last time the Chargers did beat the Saints was in 2004, when Brees threw for 257 yards, four touchdowns and no interceptions in a 43-17 rout of his future team.

Since then, Brees has accumulated 1,241 yards, 10 touchdowns and four interceptions against the Bolts. Extended over a full, 16-game slate, Brees' stat line against the Chargers would come out to around 5,000 yards, 40 touchdowns and 16 interceptions. Not too bad, regardless of whether or not he goes into these games with an extra bit of motivation.

Another fun fact? The Saints and the Chargers are the only two teams that Brees has played and never lost to. 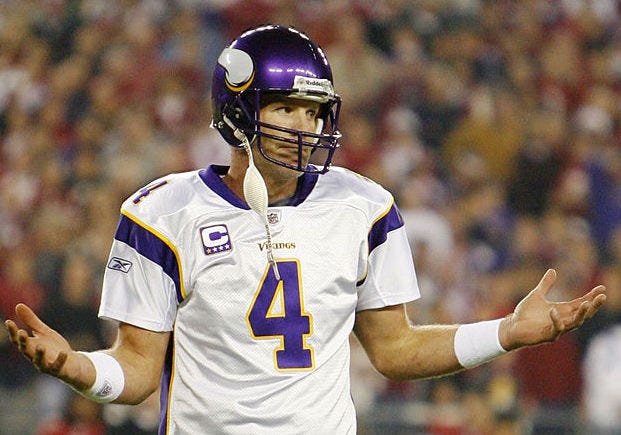 Brett Favre shrugs in reaction to a play with the Vikings. Photo credit (Christian Petersen/Getty Images)

RADIO.COM Sports' own Jesse Pantuosco helped us to relive some of the NFL's nastiest splits between teams and players, and Favre's split from Green Bay was definitely a necessary inclusion. His faux retirement left the Packers in a tricky situation, but getting rid of him was hopefully the way to deal with that issue.

Their plans did not include Favre going to the division rival Minnesota Vikings and thriving against his old team in his first two efforts of the 2009 season.

In his first ever time facing the Packers, Favre went off, going 24-of-31 for 271 yards and three TDs:pic.twitter.com/qEWMvzkIMq

However, 2010 was not as kind to Favre, considering he combined for 420 yards, one touchdown and four interceptions in two losses to Green Bay. 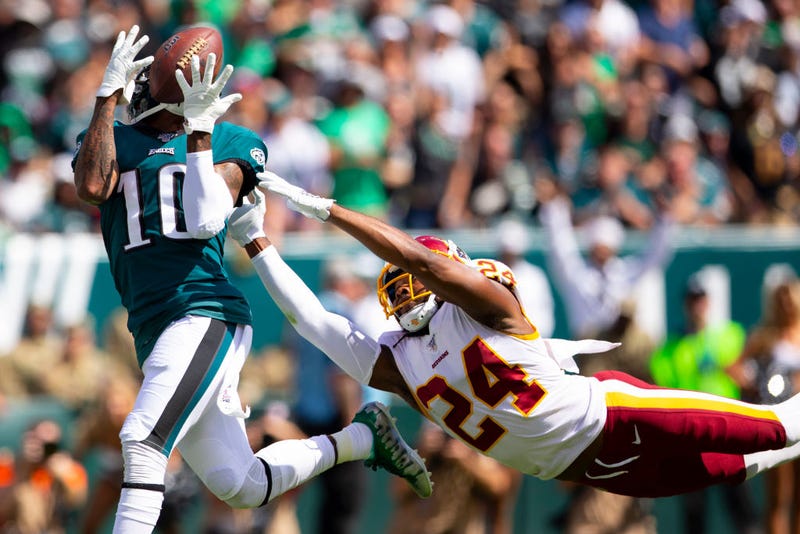 DeSean Jackson vs. Philadelphia AND Washington

Jackson's first stint in Philly came to an end after the infamous Chip Kelly overhaul that completely changed the franchise, and, boy, did DeSean enjoy showing out against them going forward. No, not all of these games were great outings. But four of the six resulted in a triple-digit yardage total and his trademark long scores were also featured prominently. Perhaps more importantly, five of these six games resulted in wins over Philadelphia. Overall, his career stat line against the Eagles extended into a full season looks like this:

That yardage total and Y/R figure would both be single-season highs for DeSean, while the touchdown count would come up just one shy of his single-season best.

Though he's only had one really good game against Washington after leaving the franchise following the 2017 season, it came in a Week 1 showdown as soon as he had rejoined the Eagles. And though his second stint in Philly has been ravaged with injuries, it was a sweet sight to watch him absolutely dominate and show great chemistry with Carson Wentz right out of the gate.

DeSean Jackson is back

“He feels good, he feels healthy and he's ready to go for the regular season. Getting him back in the offense is just a boost”
pic.twitter.com/cfgKjOwXAA 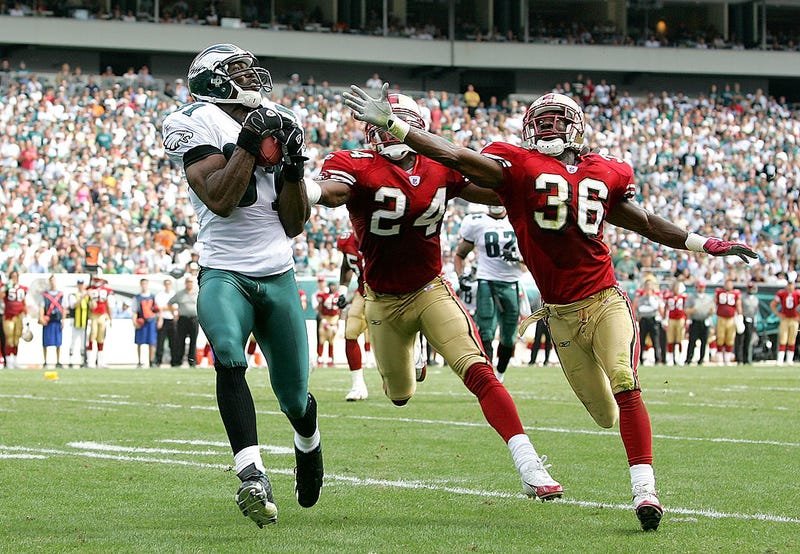 Owens only played against the 49ers twice, but he absolutely erupted in both efforts following a pretty nasty departure from the Bay Area (also featured in Pantuosco's story). The first came with the Eagles, while the second came with the Cowboys, and both resulted in wins over the Niners.

However, his efforts of revenge against the Eagles came up well short in his first year with the Cowboys. In fact, you could say the Eagles got revenge on Owens:

The Cowboys lost handily in both efforts. Eventually, T.O got the best of the Eagles defense, though, torching them for 174 yards and a touchdown on 10 catches in 2007 along with two strong showing in 2008. 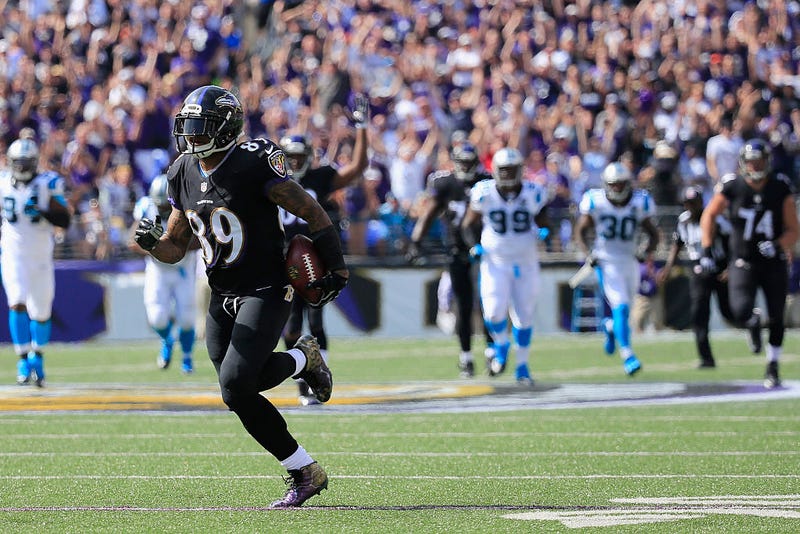 There's only one game to show for here, but it was quite the noteworthy effort. Smith and the Ravens absolutely dominated the Panthers to the tune of a 38-10 rout. It was especially sweet for Smith, who had been released by the Panthers the year before and promised he'd get his revenge on his former team for dumping him when he still had a lot left in the tank.

It wasn't the only revenge he exacted on his former team, either.