The Buffalo Bills are one win away from their first Super Bowl appearance since the 1993 season. To get there, they’ll have to beat the defending champion Kansas City Chiefs in their own stadium.

1.) Be more aggressive then they were in Week 6

When the two teams played back in Week 6, the Bills didn’t blitz a single snap on defense. Their focus on the Chiefs’ passing game led to Kansas City rushing for 245 yards.

But it wasn't just that the Bills didn't blitz. They were passive all night and never really attacked. Linebackers were too stationary or dropped back too much and often, and looked like they were just waiting for the play to come to them instead of attacking the offense like we've seen most of the last couple months.

That can’t happen again this weekend.

Of course the primary focus should still be on stopping the Chiefs’ passing game, but they’ll have to find a way to do that while also making sure they don’t allow that big rushing game.

Also, with Patrick Mahomes playing on an injured toe, the Bills should want to test to see how well he can move in, around, and out of the pocket, which means even more aggressiveness and some blitzing.

The Chiefs's offense has weapons all over the field, but tight end Travis Kelce is Mahomes’ go-to guy, especially in big situations.

Kelce finished fifth in the NFL in receptions amongst all players, not just tight ends, with 105 catches. He finished second in receiving yards, with 1,416, behind only Stefon Diggs of the Bills, and tied for fifth in the NFL with 11 touchdown catches.

Faced with a big third down, or a critical play in the red zone, Mahomes will look Kelce’s way to make a play.

The Bills will have linebacker Matt Milano back for this game, which should be a big boost compared to their last meeting back in Week 6. Milano won’t necessarily be on Kelce one-on-one all the time, but they should see their share of matchups.

Safety Jordan Poyer is another player who may draw Kelce once in a while.

No matter who it is, the Bills have to be very aware of where Mahomes’ main target is.

In their only loss in a game that mattered, 40-32 against the Las Vegas Raiders in Week 5, the Raiders had four pass plays that covered more than 40 yards, including passes of 72 and 59 yards that both went for touchdowns. The Raiders threw for 10.8 yards per-pass in the game, the highest total the Chiefs gave up all season.

The Bills had 66 passing plays of 20 or more yards in the regular season, fourth most in the NFL, and were fourth overall with a 7.75 average gain per-pass on the season.

The Chiefs did a great job against Bills quarterback Josh Allen the first time around, not allowing him to throw deep. But Allen also missed a couple of chances in that earlier matchup. He needs to connect on them when they present themselves in this one. 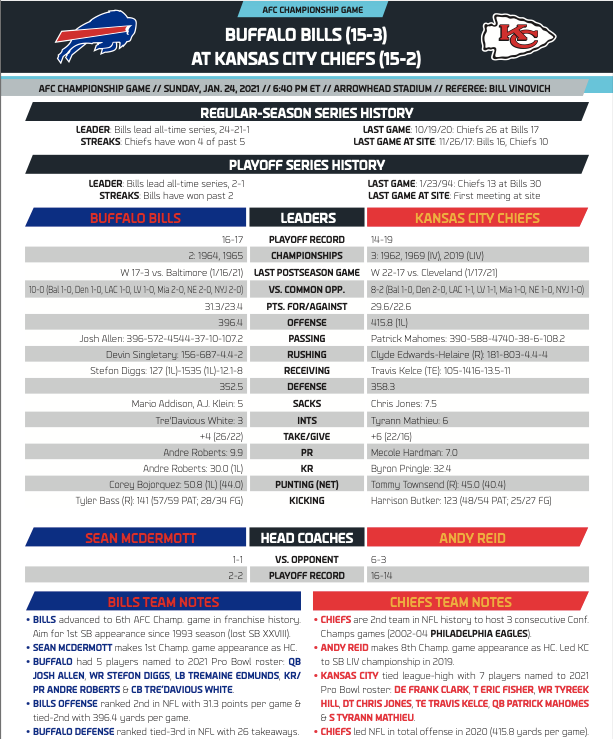 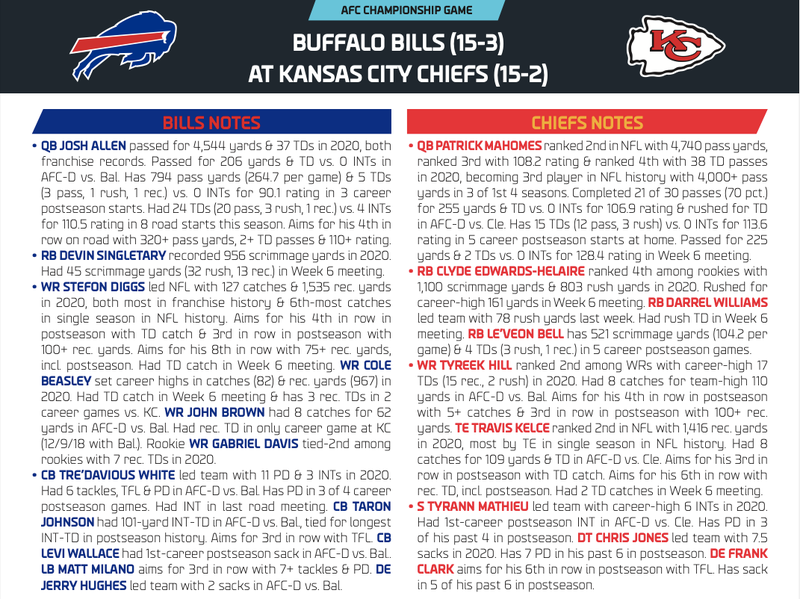