One of the most electric players in NFL history is making a comeback.

Reuters is reporting that Michael Vick will play in the Fan Controlled Football League. The article notes that Hall of Fame wide receiver Terrell Owens and former Heisman Trophy winner Johnny Manziel are among those who play in the league.

FCF brands itself as having "gamedays like no other," offering this excerpt of what the goal of the league is: "FCF is pro football re-imagined for the modern digital world. Real games played in a single, high tech studio arena and streamed live on Twitch. Oh, and YOU call the plays." The field is only 50 yards long, and the seven-on-seven games take place with a running clock and no special teams plays.

Earlier this year, Vick ran a 4.72 40-yard dash during Rich Eisen's "RunRichRun" charity event, despite admitting that he suffered a hamstring injury while running. The guess here is that those who grew up playing the Madden football games in the mid-2000s will be especially inclined to test Vick's legs in FCF. Also, even though he'll turn 42 in June, we have no doubt that Vick can throw the ball the full length of the 50-yard field.

The Atlanta Falcons selected Vick with the No. 1 overall pick out of Virginia Tech in the 2001 NFL Draft. In a career spent primarily with the Falcons and Philadelphia Eagles, Vick tossed 113 touchdowns to 88 interceptions, while setting an quarterback record with 6,109 rushing yards over 12 seasons. Vick's NFL career concluded with the Pittsburgh Steelers in 2015. 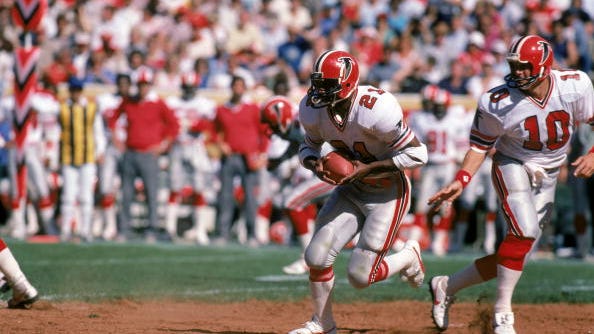