Orchard Park, N.Y. (WGR 550) - The National Football League released its 2022 regular season schedule on Thursday, with the Buffalo Bills being featured in the season-opening game of the year against the Super Bowl LVI champion Los Angeles Rams on Thursday, Sept. 8 at SoFi Stadium.

It won't be the one and only time the Bills will be featured in prime-time during the 2022 regular season, as Buffalo is set to play in a total of six games in the national spotlight.

In addition, Buffalo will appear for a third time on Thanksgiving over the last four seasons. This time, the Bills will be featured in the opening game of the day in Detroit when they take on the Lions at Ford Field for a 12:30 p.m. EST kickoff.

Here is a look at the Bills' complete schedule for the 2022 season:

After kicking off the 2022 season in Los Angeles as the NFL's opening game, the Bills open their home portion of the schedule at home on Monday night against the Tennessee Titans on Sept. 19 at Highmark Stadium.

Buffalo's next marquee game on the schedule takes place Week 6, as they return to Kansas City to face the Chiefs on Sunday, Oct. 16 in a rematch of the 2021 AFC Divisional Round, which featured one of the best playoff games in recent memory. 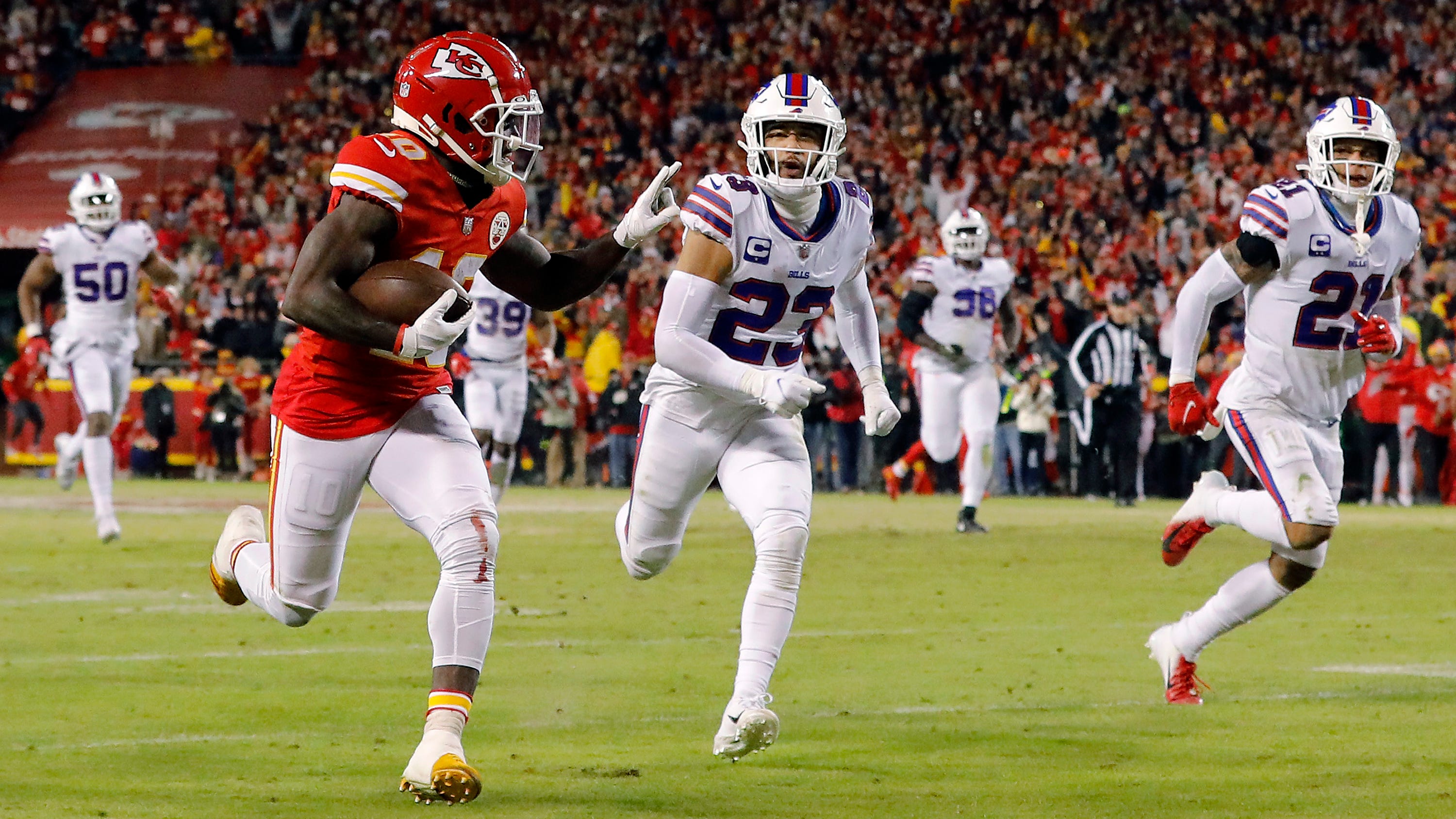 After a Week 7 bye week, the Bills go back under the bright lights of prime-time on Sunday, Oct. 30 when they host Aaron Rodgers and the Green Bay Packers on "Sunday Night Football" on NBC. Rodgers is the two-time reigning NFL MVP, after beating out Josh Allen in 2020 and then repeating again in 2021.

Nov. 24 marks Thanksgiving on the 2022 calendar, which will see Buffalo playing in the national spotlight against the Lions. The Bills have had plenty of success in their past two games on Thanksgiving, beating the Dallas Cowboys in 2019, and then the New Orleans Saints this past year at the Superdome. 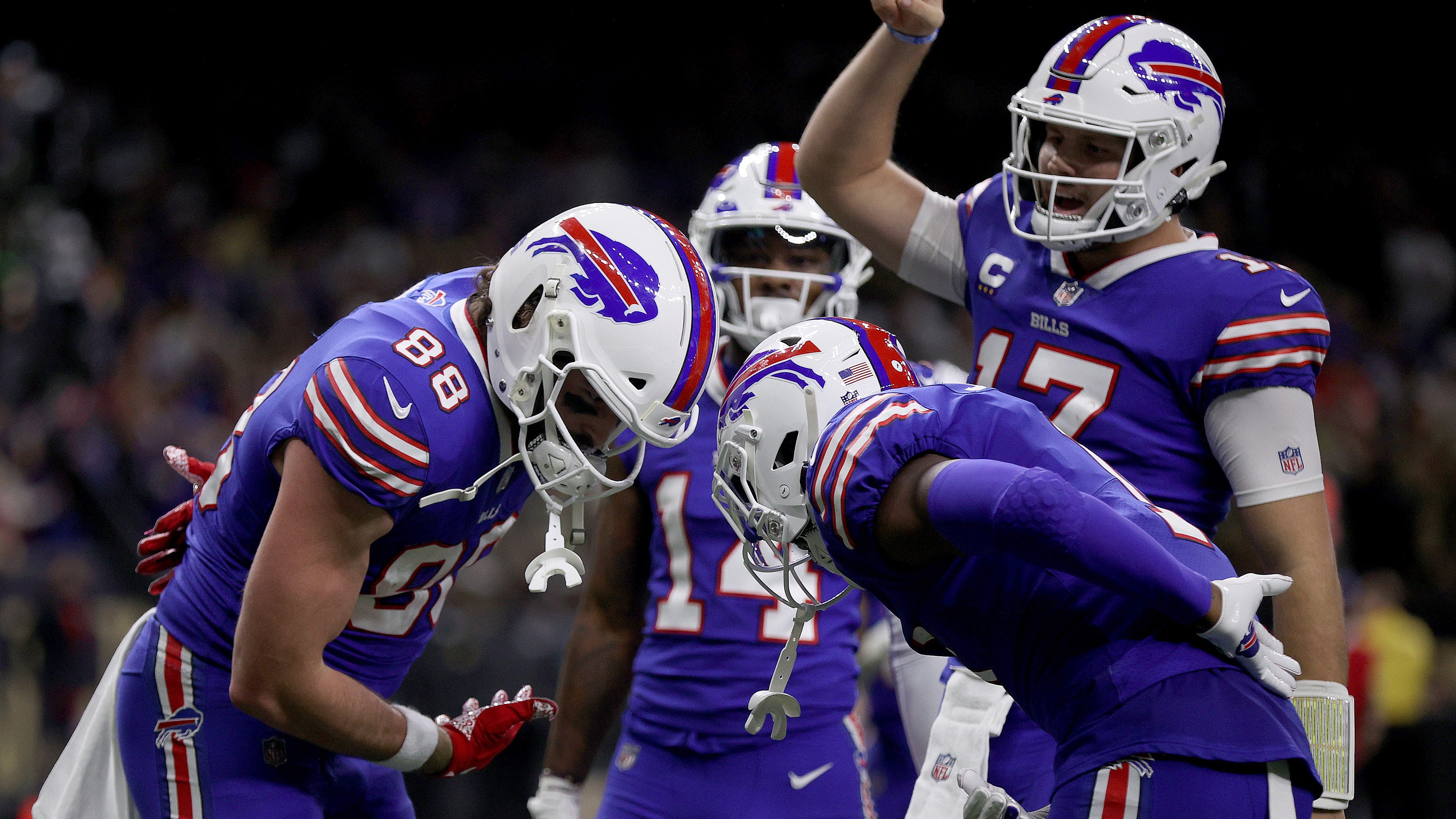 Bills feast in win over Saints on Thanksgiving night

The following week features the Bills back in prime-time on Thursday night, as they head to Foxboro to face the AFC East rival New England Patriots for the first of two matchups this year. Kickoff at Gillette Stadium comes at 8:15 p.m. ET and will be featured this year as part of Amazon's first season as the sole home of "Thursday Night Football".

Buffalo will have a pair of games on the schedule that have the possibility to be flexed to Saturday in Week 15 against the Miami Dolphins, and then in the regular season finale against the Patriots. Both contests are scheduled as home games in Orchard Park.

After playing the Chicago Bears for a 1 p.m. EST kickoff on Christmas Eve, the Bills will have one more prime-time game on the schedule in Week 17, when they head to Cincinnati to play the defending AFC champion Bengals at Paul Brown Stadium on "Monday Night Football".