Aaron Judge is headed home for the holidays and potentially much longer if the Giants get their wish. The reigning American League MVP met with Giants brass Tuesday in San Francisco, a session that MLB insider Jon Morosi described as “very productive.” While the Giants have yet to make Judge an official offer, it’s coming says Morosi, perhaps as soon as later this week.

“I’m told that the meetings went all the way up to the ownership level,” Morosi told Matt Vasgersian of MLB Network. “It was a very productive meeting. I don’t think right now that there has been an offer made yet. But I do expect that could happen within the week.”

Details remain somewhat scarce (both sides are playing it close to the vest), though Morosi indicates the Giants rolled out the red carpet for Judge, suggesting Tuesday’s meeting included recruiting pitches from players he grew up rooting for as a young fan in Linden, California. Once his offer comes in from San Francisco, negotiations should move relatively quickly with Judge expected to make a decision either during or shortly after the Winter Meetings in San Diego next month (December 4-7).

“Aaron has a pretty good understanding of where the Yankees stand with what they’ve done in [their] previous offers. I believe that once Aaron Judge knows where at least the initial Giants offer comes in, and I do believe one is forthcoming, that there will be a fairly robust conversation here to where we could see Aaron Judge signing with a team within the next two weeks,” said Morosi. “This is not going to be a February decision. I would expect this to be a December decision and it could even happen before the end of the Winter Meetings.”

My report on Aaron Judge for @MLBNetwork this morning — including his meeting with #SFGiants ownership. @MLB #MLBNHotStove pic.twitter.com/Coo5HbFqPR

Judge headlines a strong free-agent class that also includes Cy Young winners Justin Verlander and Jacob deGrom, former NL batting champ Trea Turner and two-time World Series champion Xander Bogaerts. The 30-year-old outfielder was recently the subject of a league investigation into collusion by the Mets and Yankees, though both clubs were eventually cleared of any wrongdoing. Coming off a record-breaking season, Judge is expected to fetch upwards of $300 million on the open market with a strong likelihood of becoming the highest-paid position player in MLB history. 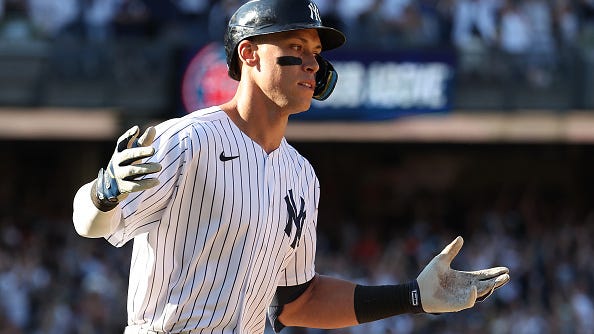 Aaron Judge set to meet with Giants this week