It probably wouldn't take mortgaging anything this time around.

According to Ben Standing, six years after fans clamored for the Philadelphia Eagles to trade up and select Marcus Mariota in the NFL Draft, the two sides could be a potential fit:

"And, while Philadelphia wouldn’t seem like an obvious landing spot — Jalen Hurts remains, and Mariota and Carson Wentz are repped by the same agency — one prominent league source said to keep an eye on the Eagles if Mariota is traded or released."

After being usurped by Ryan Tannehill in the final year of his rookie contract with the Tennessee Titans, Mariota signed a two-year/$17.6 million with the Las Vegas Raiders last offseason. He threw for 226 yards and rushed for another 88 in the team's Week 15 overtime loss to the Los Angeles Chargers, intriguing some about what he could do with another chance to start regularly. That opportunity, however, is unlikely to come in Las Vegas, considering Pro Football Focus graded Derek Carr as the 10th best quarterback in the sport in 2020.

At the outset of the offseason, it appeared that Mariota could be traded, though NFL Media's Ian Rapoport reported over the weekend that teams have been a little turned off by the incentives present in year two of Mariota's deal. If traded, Mariota would carry a cap hit of $10.725 million in 2021. In addition to that, the second year of the pact includes $12 million in incentives, which, as Tyler Sullivan of CBS Sports noted, could mean that he makes more than $22 million if he is the starter for the full season.

There may be a team that would prefer to have Mariota as their starter in 2021, as opposed to other free agents options like Jameis Winston, Ryan Fitzpatrick, Tyrod Taylor or Jacoby Brissett. That said, they may not be so high on him that they'd like to trade draft capital for Mariota and potentially pay him over $20 million in 2021. But if the Raiders end up releasing Mariota - which would leave them with $0 in dead cap - that would be a game changer.

It would be especially big for a team like the Eagles. Over The Cap currently projects that the Eagles are more than $43 million over the salary cap. They'd need to clear quite a bit of space to potentially carry a veteran backup that could start if Jalen Hurts falters. That's at least possible, though. There just isn't a realistic chance the Eagles could make Mariota's current deal work in a trade.

Though it feels like a lifetime ago, there was quite a bit of buzz leading up to the 2015 NFL Draft that Chip Kelly, who had assumed personnel control, could attempt to trade up for Mariota, who he had coached at Oregon. Ultimately, though, the Titans held firm at pick No. 2, selecting the former Heisman Trophy winner. The Eagles proceeded with Sam Bradford, going just 7-9, with Kelly dismissed as both head coach and front office lead before the season finale. 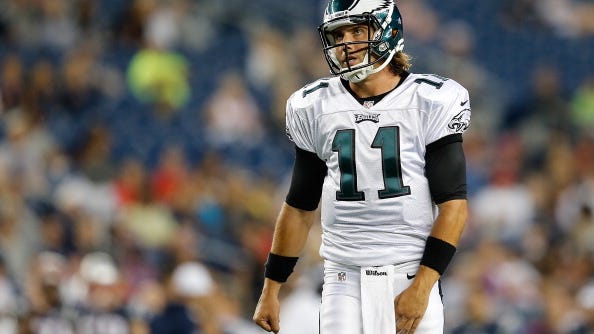 5 players you forgot played for the Philadelphia Eagles