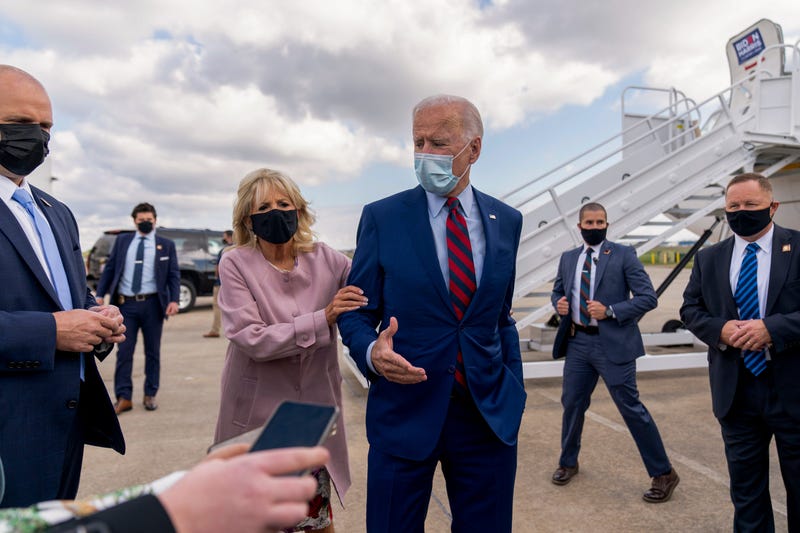 Photo credit Jill Biden moves her husband, Democratic presidential candidate former Vice President Joe Biden, back from members of the media as he speaks outside his campaign plane in New Castle, Del., on Oct. 5, 2020. (AP Photo/Andrew Harnik)
By The Associated Press

NEW YORK (AP) — Ryan Seacrest will have a special pair of guests alongside the music stars at this year's New Year's Eve celebration on ABC — the president-elect and the future first lady.

President-elect Joe Biden and Dr. Jill Biden are scheduled to give “their last interview of the year” in New York’s Time Square on “Dick Clark’s New Year’s Rockin’ Eve with Ryan Seacrest 2021.”

The Bidens will "share an inspiring message as we come together to close out 2020 and look ahead with hope to 2021,” according to a statement by the producers.

Jennifer Lopez will be the musical headliner. The pop star will perform live before the iconic ball drop on Dec. 31. Because of the coronavirus pandemic, the event will be closed to the public.

Other performers in New York include Cyndi Lauper, Billy Porter, Jimmie Allen and Machine Gun Kelly. Lauper and Porter collaborated on the Broadway musical “Kinky Boots" and they will join forces for a special performance during the TV special, which will kick off on ABC at 8 p.m. Eastern.

“Dick Clark’s New Year’s Rockin’ Eve with Ryan Seacrest 2021" will run until 2 a.m. Eastern on Jan. 1. Seacrest is returning to host the event for a 16th year, and he will be joined by Porter and Lucy Hale in New York. Ciara will host from Los Angeles.