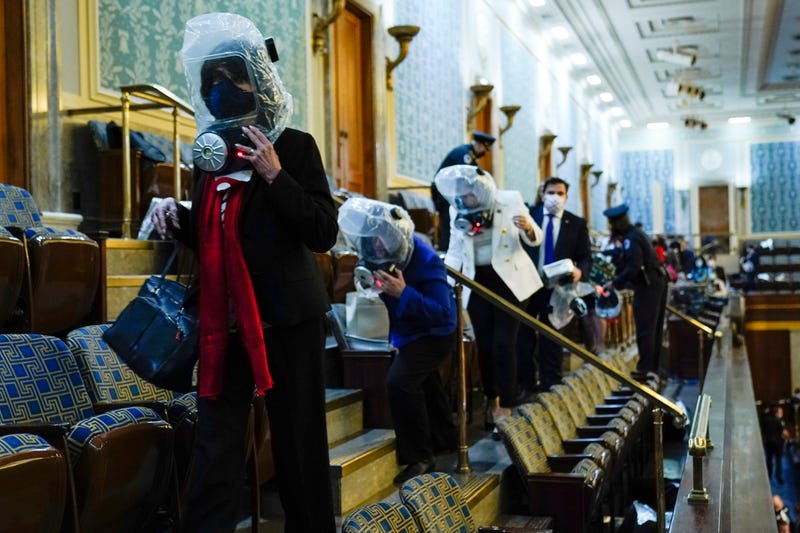 Photo credit People shelter in the House gallery as protesters try to break into the House Chamber at the U.S. Capitol on Wednesday, Jan. 6, 2021, in Washington. (AP Photo/Andrew Harnik)
By The Associated Press

NEW YORK (AP) — The storming of the U.S. Capitol by supporters of President Donald Trump played out on television in searing fashion Wednesday, with stunning pictures of guns drawn in the House of Representatives and hand-to-hand combat with police.

The scenes of bedlam and fear at the center of national government erupted quickly, but journalists wondered whether they should have been a surprise.

“It's hard to believe that this is going on,” said CNN's Wolf Blitzer. “This is unprecedented, it is dangerous and this is so, so embarrassing for the United States of America.”

The social media giants Twitter and Facebook took the unprecedented step of suspending Trump's privileges to post messages on their platforms, at least temporarily. Both companies said Trump had violated their policies.

Journalists had gathered to follow Congress' counting of electoral college ballots to seal the victory of President-elect Joe Biden, a normally routine event turned tense by the challenge to the vote by some of Trump's political allies.

As that debate was ongoing, the media's focus shifted to outside Congress, where supporters who had gathered to hear an aggrieved president fume about his defeat began streaming to the Capitol. They climbed the Capitol steps, where one person held a placard saying “fight for Trump.”

After breaching the building, pictures emerged of an armed standoff in the House as politicians cowered behind desks and people smashed the building's windows and climbed in. Newsmax showed stunning footage of police and rioters squaring off in the Capitol Rotunda.

“The mob has overtaken the process of trying to certify the Electoral College,” said Fox News Channel reporter Chad Pergram. “Security here at the U.S. Capitol has failed.”

Given Trump's speech and two months of baseless charges that the election was rigged, several journalists raised questions about why law enforcement seemed so unprepared.

“The shock I have is how easy this was,” said NBC's Chuck Todd.

As images of people banging on a door at the Capitol aired, ABC News anchor George Stephanopoulos said, “that is not Ukraine, that is not Belarus.”

There were debates in newsrooms across the country about what terminology to use to describe the participants. Demonstrators? Protestors? Rioters? A mob? CNN's Jake Tapper said, “we call them terrorists.” NBC's Lester Holt said “there are some elements of a coup attempt.”

CBS News’ Norah O’Donnell conducted an extraordinary interview with House Minority Leader Kevin McCarthy, pressing him on whether he has urged Trump to do something to stop his supporters and confronting him on whether the false claims of widespread electoral fraud had led to it.

“I just wonder whether someone is going to ... call a spade a spade and I am giving you the opportunity right now,” O'Donnell said.

Biden spoke to the nation, followed by Trump. The president urged his supporters to respect law enforcement and go home, but also said he “loved” them and repeated claims of a stolen election. Tapper wondered whether CNN should even have aired it.

On CNBC, Shepard Smith ordered a tape of Trump's message stopped in midstream. “Stop the tape,” he said. “That is not true, and we are not airing it.”

CNN's Abby Phillip said Americans needed to question whether Trump was even capable of leading the country for the next two weeks.

“He is inciting violence against the government itself, lawlessness, vandalism and he's also completely MIA in terms of his principal job, which is to keep this country safe,” she said.

Even as the building was being stormed, Trump supporters in the media were calling into question who was responsible. On One America News Network, anchor Dan Ball said the violence was nothing like civil rights demonstrations last summer, and suggested without evidence that Antifa demonstrators may have disguised themselves as Trump supporters for the siege on the Capitol.

Fox anchor Martha MacCallum, during the demonstration, called the breach of the Capitol a “huge victory” for protestors. She said they have “disrupted the system in an enormous way” and said it was an escalation of protests that included a demonstration in front of Missouri Republican Sen. Josh Hawley's home.

There were tense moments for reporters outside the Capitol. A Fox News reporter asked a man to stop blocking his camera. A crew from The Associated Press had its equipment stolen and destroyed.

The nation's deep divisions played out in the media before and after protestors moved on the Capitol. Fox News Channel, Newsmax and OANN all carried the president's speech Wednesday live. CNN and MSNBC, meanwhile, ignored the president's words.