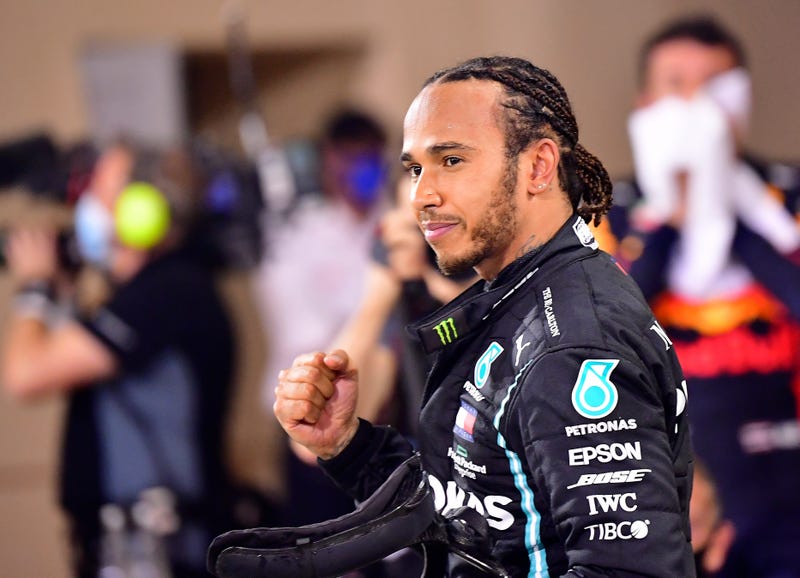 Photo credit FILE - In this Sunday, Nov. 29, 2020 file photo, Mercedes driver Lewis Hamilton of Britain celebrates after wining the Formula One race in Bahrain International Circuit in Sakhir, Bahrain. Hamilton is now a “Sir” as well as a seven-time Formula One champion after being knighted Wednesday, Dec. 30 in Queen Elizabeth II’s New Year honors list. The awards also recognize British performers, politicians and public servants, as well as people outside the limelight who have worked to defeat the coronavirus and its devastating impact. (Giuseppe Cacace, Pool via AP, File)
By The Associated Press

LONDON (AP) — Lewis Hamilton is now a “Sir” as well as a seven-time Formula One champion.

Hamilton received a knighthood Wednesday as part of Queen Elizabeth II’s New Year's honors list, which also recognized British performers, politicians, public servants and people outside the limelight who worked to defeat the coronavirus and its devastating impacts.

Hamilton, who secured his seventh F1 title last month to equal Michael Schumacher’s record, has said his recent success was partly inspired by the Black Lives Matter movement. The 35-year-old race car driver took the knee on the grid and wore anti-racism slogans during the season.

Hamilton told the BBC last week that “it was a different drive than what I’ve had in me in the past, to get to the end of those races first so that I could utilize that platform” against racism.

Supporters have suggested Hamilton would have been knighted sooner if not for his tax status. Hamilton’s knighthood was awarded in the “overseas” section of the honors list because he lives in low-tax Monaco.

His tax affairs made news in 2017 when the Paradise Papers leak showed he avoided paying more than $4 million in taxes on a private jet registered in the Isle of Man, a tax haven.

Motorsport U.K. Chairman David Richards said Hamilton’s tax status had been “totally misunderstood” and that the racing champion was among the 5,000 highest taxpayers in the U.K.

In other honors, veteran comic actress Sheila Hancock was made a dame, the female equivalent of a knight, in recognition of her six-decade career. Acclaimed makeup artist Pat McGrath, dubbed the “most influential makeup artist in the world” by Vogue, also received a damehood.

There was a knighthood for cinematographer Roger Deakins, a 15-time Academy Award nominee who has won Oscars for “Blade Runner 2049” and “1917.”

Veteran footballers Jimmy Greaves and Ron Flowers were made Members of the Order of the British Empire, or MBEs, after a long-running campaign to ensure every surviving member of the team that won England the 1966 World Cup receives an honor.

The queen's honors are awarded twice a year, in late December and in June, when the monarch's birthday is observed. The awards acknowledge hundreds of people for services to community or British national life. Recipients are selected by committees of civil servants from nominations made by the government and the public.

Greta Westwood, chief executive of nursing charity the Florence Nightingale Foundation, received a CBE for her work highlighting the mental-health toll of the pandemic on front-line workers. Others honored for their work during the pandemic include research scientists, statistical modelers, engineers and onesie manufacturer Katherine Dawson, who received an OBE for making scrubs for medics when supplies were short.

In descending order, the main honors are knighthoods, CBE, OBE and Member of the Order of the British Empire, or MBE. Knights are addressed as “sir” or “dame,” followed by their name. Recipients of the other honors have no title, but they can put the letters after their names.

There is growing criticism of the honors’ evocation of the British Empire, the legacy of which has been debated anew amid campaigns against racism and colonialism around the world.

The education spokeswoman for the opposition Labour Party, Kate Green, who has an OBE, recently called the titles of the honors “offensive and divisive.”

The British government said there are no plans to change the titles.