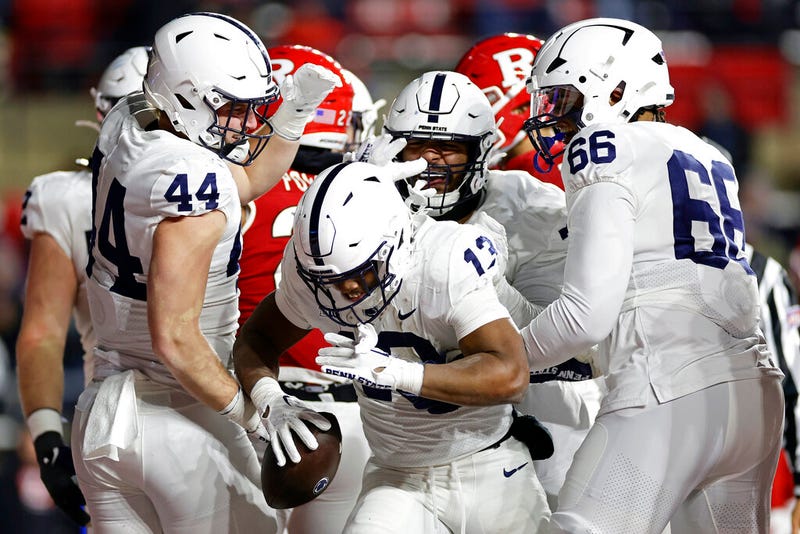 Penn State running back Kaytron Allen (13) is congratulated by teammates after scoring a touchdown against Rutgers during the second half of an NCAA college football game, Saturday, Nov. 19, 2022, in Piscataway, N.J. Penn State won 55-10. Photo credit (AP Photo/Adam Hunger)
By The Associated Press

STATE COLLEGE, Pa. (AP) — James Franklin has been around long enough to know that it’s simply natural for a team’s collective energy level to fade this late in the season.

“I do think we got good mojo about us right now,” Franklin said. “It’s late in the season. It’s a long season and there are times where late in the season can be challenge and a grind on everybody, and just doesn’t feel like that.”

Penn State players began the week thinking about taking back the bookshelf-esque Land Grant Trophy from Michigan State (5-6, 3-5) on Saturday in demonstrative fashion.

“I love everything about the trophy,” senior safety Ji’Ayir Brown said. “I think the physical structure is nice. It’s a little outdated but that’s the beauty of it.”

Penn State is fresh off three straight blowouts — Rutgers, Indiana and Maryland — in which nearly every player, no matter how young they were, contributed. And the defense especially is showing the results: 16 players have at least half a sack, while 27 have chipped in on tackles for loss.

“I’ve never seen that stat before in my career,” Franklin said.

It’s a trend that should concern a Michigan State team that’s 89th in total offense nationally. The Spartans also should be wary of Penn State’s two freshmen running backs.

Nick Singleton and Kaytron Allen have helped boost Penn State’s overall outlook for the future. They’ve combined for 21 touchdowns and are the first two rookies in Big Ten history to run for at least 700 yards each.

Michigan State needs a win to become bowl eligible. The Spartans are a season removed from winning 11 games, including a New Year’s Six bowl against Pittsburgh.

The Spartans said they won’t need to talk much about what’s at stake this week.

“I hope everybody knows our record in our locker room," quarterback Payton Thorne said.

Wideout Parker Washington will miss the regular-season finale and Penn State’s bowl game with an unspecified injury. He didn’t travel to Rutgers last week after catching just one pass for 14 yards against Maryland.

The sophomore is Penn State’s leading receiver with 46 catches for 611 yards.

Penn State could get starting left tackle Olu Fashanu and star cornerback Joey Porter Jr. back, however. Fashanu was hurt late against Ohio State on Oct. 29 and hasn’t played since. Porter had to have an appendectomy prior to the Maryland game and has missed the last two.

The Spartans are in a tough spot because in their final home game, they lost to Indiana in double overtime after leading by 17 points in the second half.

It stunted the momentum they'd gained by bouncing back from a loss at Michigan, where Michigan State players were suspended for their role in a tunnel melee.

“I told the guys that we have to block out the noise because there is going to be a lot of it just like there has been all season,” coach Mel Tucker said. “We have to move on from it. That takes mental toughness and character. I think this team has shown that we do have that, so we are going to need more of it.”