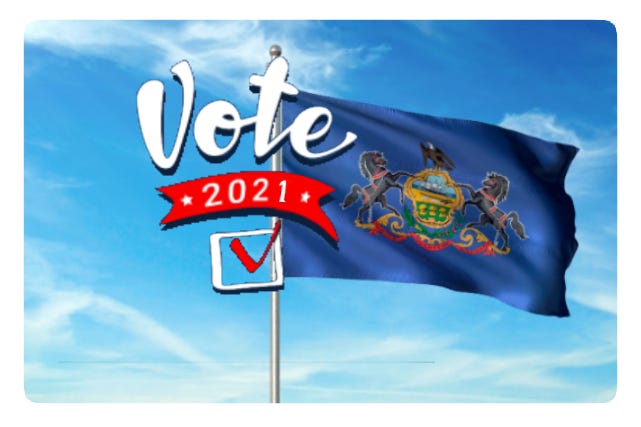 “I’m not registered to vote. Is it too late?”

No, it’s not too late, but time is running out. Pennsylvanians have until October 18th to register to vote in the upcoming municipal elections on November 2nd.

“Pennsylvanians can quickly and easily register to vote, check the status of their registration and apply for a mail ballot online at vote.pa.gov,” said Acting Secretary of State Veronica Degraffenreid.

In addition to applying for a new registration, Pennsylvania’s online voter registration (OVR) site can also be used to update existing voter information, such as a change of name or address.

“I’m new to Pennsylvania. Can I vote on November 2nd?”

It depends. Are you:

”Am I already registered to vote?  If so, where do I go on Election Day?”

Voters can use the online system to confirm their registration status prior to the October 18th deadline. The site provides county election office contact information and a polling place locator.

“Does Pennsylvania offer voting by mail?”

“Whichever voting option you choose – by mail, early in person by mail ballot, or at the polls on Election Day – the important thing is to get out and vote,” Secretary Degraffenreid said. “The local officials elected in municipal elections make the decisions that affect voters’ daily lives.”

For more information on voter registration, voting and elections call the Department of State’s toll-free hotline at 1-877-868-3772, visit vote.pa.gov or follow along on social media with the hashtag #ReadyToVotePA.