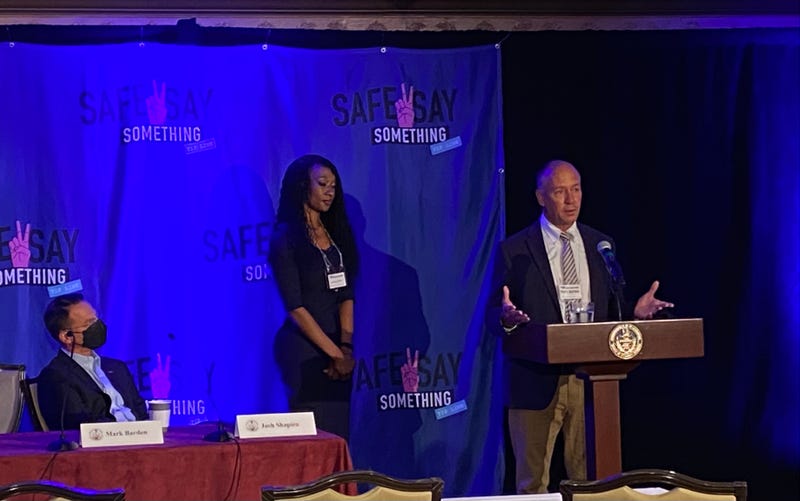 Safe2Say Something, an anonymous tip line for kids in Pennsylvania, has already helped 76,000 kids reach out for help, according to Pennsylvania Attorney General Josh Shapiro.

Shapiro was at the Omni William Penn Hotel in Pittsburgh Wednesday to discuss Safe2Say at the National Tipline Conference.

"Safe2Say has, no doubt, saved lives in Pennsylvania and really has put a spotlight on the need for more mental health services for our children and provided real intelligence for law enforcement across our state," Shapiro said.

He said the top five concerns reported since the tip line launched in 2019 are bullying, self-harm, suicidal intention, depression and drug use.

The tip line was created in partnership with Sandy Hook Promise and Mark Barden. Barden's seven-year-old son Daniel was one of 26 people killed in the mass shooting at Sandy Hook Elementary School in 2012.

Barden was also in Pittsburgh Wednesday telling his story and explaining the importance of tip lines like Safe2Say.

"I will always miss my little Daniel, and I will always be sad and angry an act of preventable gun violence took him away," he said.

He said tip lines like Safe2Say not only give kids an outlet to report potential violence or self-harm, but also helps identify the contributing factors like bullying and depression.

"There's no magic wand we can wave to protect our children from the threats that they're facing, but we know school-based anonymous reporting systems work," he said. "We're seeing that working here in Pennsylvania."