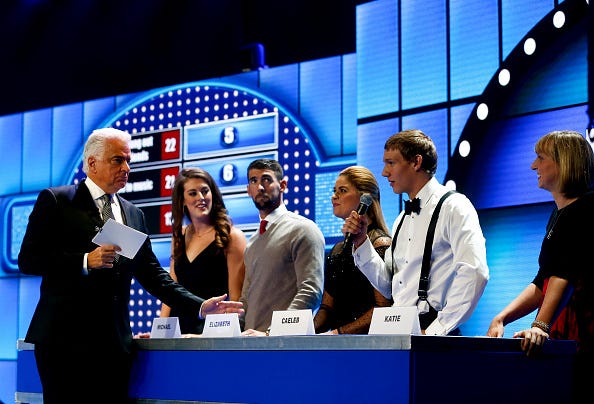 ABC will continue to go “all-in” on game shows during their summer months.

According to the Hollywood Reporter, the network has seen ample success in the realm of family-friendly game shows and competitions, which has influenced their decision to renew all of their "Summer Fun & Games" slate for the 2020 season.

Most of the retro game shows have been revived with a contemporary spin in mind.

“Press Your Luck” and “Card Sharks" will both return for a second season.

“Match Game,” “$100,000 Pyramid,” and “To Tell the Truth” will be back for a fifth season, while "Celebrity Family Feud” returns for its sixth season.

The news is far from surprising, as ABC pulled in impressive ratings during evenings when their lineup featured game shows.

In a time where scripted television yields unpredictable results, the consistently high ratings of game shows secured ABC a top spot amongst adults 18-49.

The game show success also helped propel the network to a tie with NBC in the overall adult demo, a first for ABC since 1995.

"Summer has become synonymous with ABC’s 'Fun & Games' brand," Rob Mills, senior VP alternative series, specials and late night at ABC, said Wednesday in a statement. "To have these shows return is a testament to their strength, and the excitement and fun they bring each week. These are legit star-studded shows that celebrate everything we love about the spirit of competition. Thanks to them and "The Bachelorette", we dominated summer and are doubling down on next year."

ABC previously announced the renewal of mini-golf competition “Holey Moley," the "Bachelorette" franchise (including "Bachelor in Paradise") and the final season of "Marvel Agents of S.H.I.E.L.D."