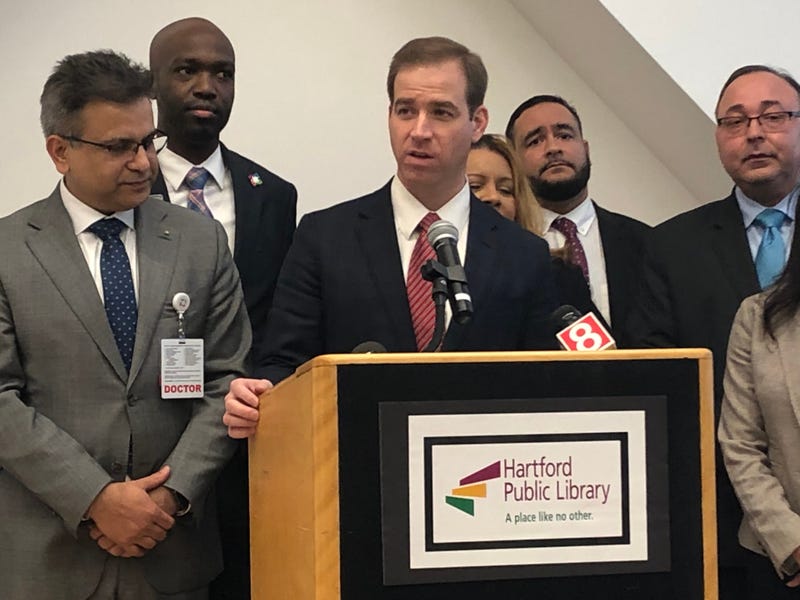 The latest on COVID-19/ Coronavirus on a whirlwind Friday of briefings, news conferences and press releases;

A New York State woman who works at Danbury and Norwalk hospitals has tested positive for COVID-19, according to Gov. Ned Lamont's office.

It's the first confirmed case in Connecticut.

Speaking at Danbury City Hall, Gov. Lamont says, "This is not unexpected."

The patient lives in Westchester County, NY and is self-quarantined at home.

42 people have been tested in CT, and all have turned up negative, according to Connecticut DPH Commissioner Renee Coleman-Mitchell. The positive case was diagnosed in NY.

The difficulty of obtaining test kits from the federal government continues (see "Test Kit Shortage," below). Coleman-Mitchell says that state still has only one kit, which can test 600 people. DPH is hoping to acquire another kit early next week. Also, the private company Quest Diagnostics is expected to begin testing next week.

Mayor Luke Bronin spoke at Harford Public Library after a briefing with leaders from city government and the city's three major hospitals.

Dr. Ajay Kumar, Executive V.P. of Hartford Healthcare, says roughly 40 people in Connecticut have been tested (as of 2 p.m. Friday), and all have turned up negative.

Officials including Mayor Bronin are certain, though, that the state will have a number of cases, and they say they're coordinating their response.

The mayor has a message for patients who think they might have the virus, or have other questions: Call the state hotline, 2-1-1 and stay home. One factor in containing the virus will be keeping contagious patients from infecting others. One doctor says don't go to the emergency room unless you would have gone anyway-- don't go just for a COVID-19 test!

While doctors at the Hartford briefing seemed to feel the drastic national shortage of COVID-19 test kits is easing, the entire Connecticut delegation to Congress is putting the heat on the federal government to speed up the process.

The state's two U.S. senators and five House members, all Democrats, have signed a letter to the Centers for Disease Control.

They write, "At this time, our state – home to 3.5 million people – only has sufficient diagnostic kits to test just over 500 individuals, and as the state moves to expand its capacity to test specimens beyond the state laboratory in Rocky Hill, Connecticut to private sector laboratories and the state’s hospitals, it is critical that access to diagnostic testing kits becomes a reality."

During a White House briefing Friday evening, Vice President Mike Pence said, "We trust, in a matter of weeks, the coronavirus tests will be broadly available to the public and available to any American that is symptomatic and has a concern about the possibility of having contracted the coronavirus"