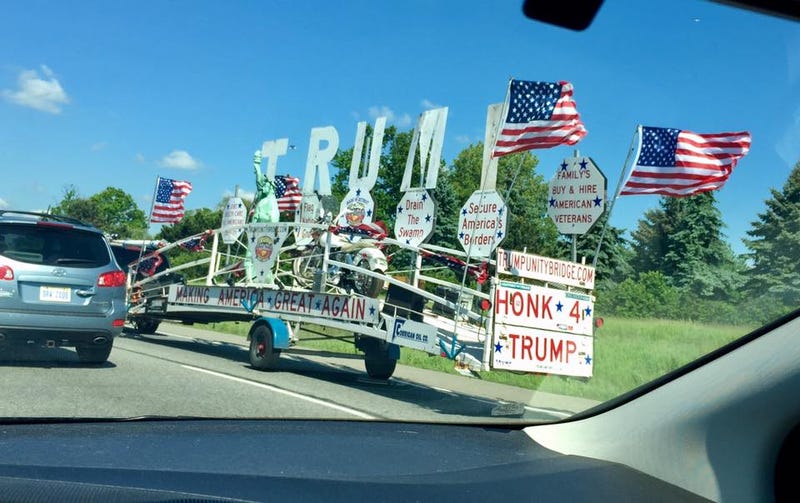 (WWJ) A protest against Michigan's Stay-At-Home order was held in Lansing Thursday, and this one has a twist: Instead of at the state capitol, it was at the governor's mansion.

"Operation Queens Castle" — organized by a group called West Michigan Politics — featured a visual familiar to many in Michigan... the float known as the "Trump Unity Bridge."

The gist of their cause: They want the state to reopen amid the pandemic.

HAPPENING NOW: Another protest type event is happening — this time outside Gov. Gretchen Whitmer’s home in Lansing. The group says they want the state to re-open.

The event, which began at 11:30 a.m., didn't draw too large of a crowd, in comparison to last week's "Operation Gridlock" in Lansing. However, video from local news stations and on social media showed several vehicles driving by — drivers honking or shouting — and more than a dozen people on foot.

The Trump unity bridge has arrived at a protest at Gov. Whitmer’s Lansing house. There’s about a dozen protesters here so far pic.twitter.com/uxCkuc9G0W

A man with a microphone stood in front of the float as he spoke  to Gov. Gretchen Whitmer directly, urging her to follow her own order to stay home and stay safe, and also to please reopen Michigan.

A woman next handed the mic asserted that Whitmer "thinks she's God," and that these executive orders are not about health and safety, but instead "all about power."

The group says they are planning another protest on April 30 AND another one in May. #COVID19 pic.twitter.com/kHyFOR3yrC

An edited image sent with a release promoting the event depicted Gov. Whitmer wearing a crown.

In a statement the group says, "We are protesting near the Wolverine Queen’s taxpayer funded castle to peacefully advocate for re-opening Michigan immediately,” said Brandon Hall, Managing Editor of West Michigan Politics. “We also want to ask her why she does not follow her own order and ‘Stay Home, Stay Safe.’" The governor has been giving live daily media briefings from Lansing, and has made appearances via video conferencing on national shows including MSNBC, The Today Show, and Good Morning America.

These protests have drawn national attention as flag-waving, screaming, horn-honking people filled Lansing a week ago; A smaller, more sedate group had a second event on Wednesday.