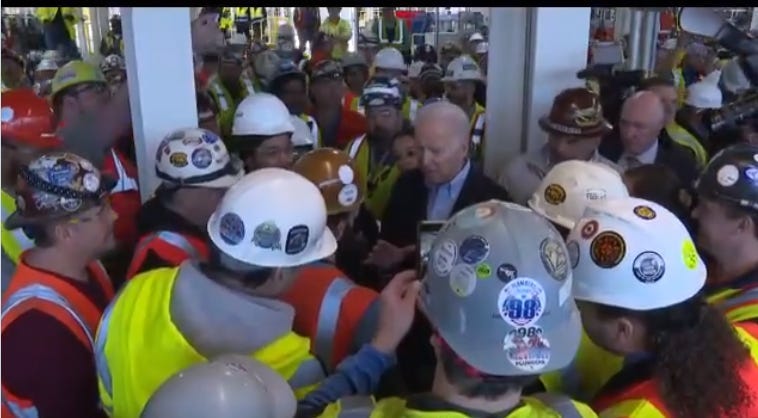 (WWJ) Detroit workers will tell you that auto factory floors are tough, but Joe Biden wasn't backing down when a worker came at him on a factory tour Tuesday morning.

Courting votes in Michigan's very important primary -- which some believe could be the final stand-off between Biden and Democratic rival Bernie Sanders -- Biden wasn't exactly jolly.

"You're gonna take away our guns," the worker tells Biden as he walks by in close quarters, surrounded by workers and the media.

Biden misses no beat before responding, "You're full of sh**."

"Shush-shush!" Biden says to a woman who tries to interject "I support the Second Amendment."

WATCH: "You’re full of sh*t," @JoeBiden tells a man who accused him of "actively trying to end our Second Amendment right."

"The Second Amendment right now if you yell 'fire,' that's not free speech," Biden said. "From the very beginning, I have a shotgun, a twin gauge, a 12-gauge, my sons hunt. Guess what? I'm not taking your gun away at all. Do you need 100 rounds?"

The worker in a hardhat mumbles something and Biden responds, "I DID NOT SAY THAT!"

At one point, Biden points his finger in the man's face and he complains, "You're pushing up on me." A pal puts his arm around the worker, calming the situation while he and Biden continue to argue heatedly.

Eventually, Biden's people and other workers push him through to shake more hands.

The near-altercation happened while Biden and Sanders pushed for last-minute support. The latest poll from Monmouth University has Biden at 51% support with Michigan Democrats, compared to Sanders' 36%.

Losing would be a blow: Sanders won the state by a narrow margin in 2016.

Of all the primary elections happening Tuesday, Michigan has the most delegates up for grabs at 125. Some are calling it Super Tuesday 2.0.