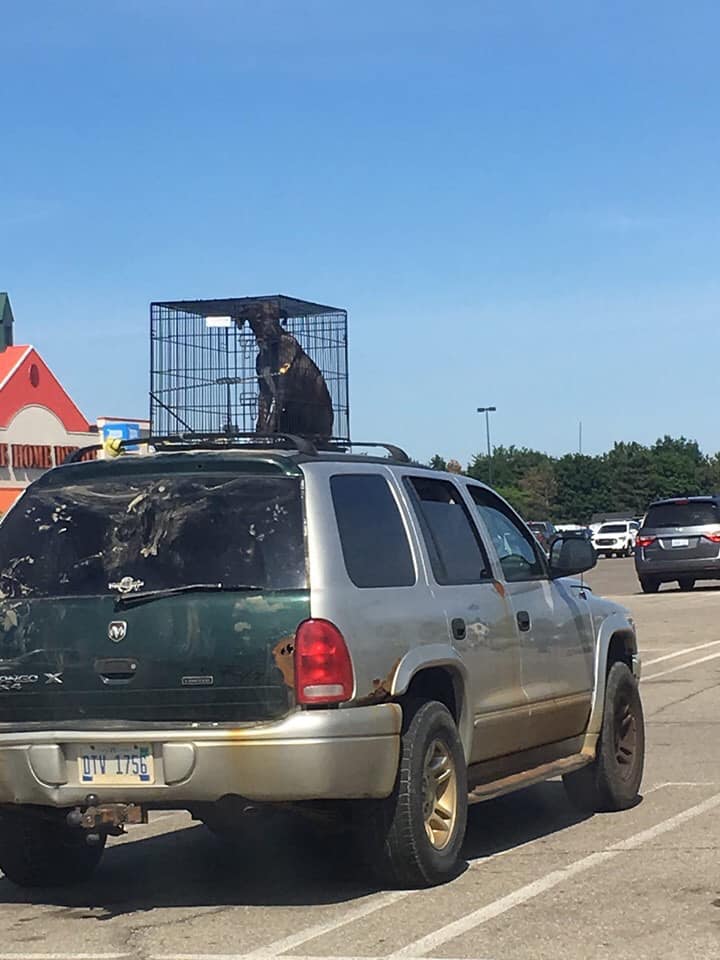 (WWJ) Photos of a handsome black dog perched in a cage high on the roof of a dilapidated SUV are drawing outrage across social media.

"Someone needs to stop this jackass for one it’s too flipping hot out and that cage is to small for that poor dog! Tees me off!! Let the dog out of the cage!!" Esther Mida wrote on Facebook, echoing the sentiment of many.

Police in bucolic White Lake Township in the outer reaches of Oakland County have responded -- several times already -- and he's still doing it. Some Facebook users say they've also spotted the scenario in nearby Waterford and Pontiac.

Why isn't someone stopping this guy?

Because police say as bad as it looks, he's not breaking the law.

The biggest misconception is that people think he's driving around with the dog in the car, and that's not the case, Hild added.

Police have responded in recent days as people photographed the dog on the roof at a nearby park, in the parking lot of McDonalds, and more.

Every time, it's the same. The dog has water, is not in a dangerous moving-vehicle-on-the-roof situation. The owner remains calm and cooperative, says he knows his rights and is well versed in the law.

"There's no law that stipulates he can't place the dog into a kennel," Hild said.

The owner tells police the dog is his constant companion and he thinks it's better for the dog to be outside than locked up indoors or inside the car while he does his business around town.

"The officers saw the dog and he had a bowl of water in the cage with him and said the dog looked fine," Hild said.

Police are aware of the public outcry, and the sentiment that they're in the wrong by refusing to take action.

"That cop is a dumba**" one person wrote on Facebook.

"They're not happy with the fact I can't charge him with anything," Hild says, adding it's the law, not laziness or reticence on the part of local law enforcement. "I've gotten convictions on abuse of a Canadian goose, I've got no problems charging (if it were possible),"

The dog is well trained to emerge from the cage when the owner returns from his errands, climb down the windshield, and get into the back seat, Hild said, adding there's just no law that can be applied and no evidence of animal cruelty.

Police are still responding to every call about the situation to make a new assessment each time, and if someone sees the dog kennel on the roof while the car is moving that would be a different situation.

The Michigan Humane Society is reaching out to police to discuss the situation.