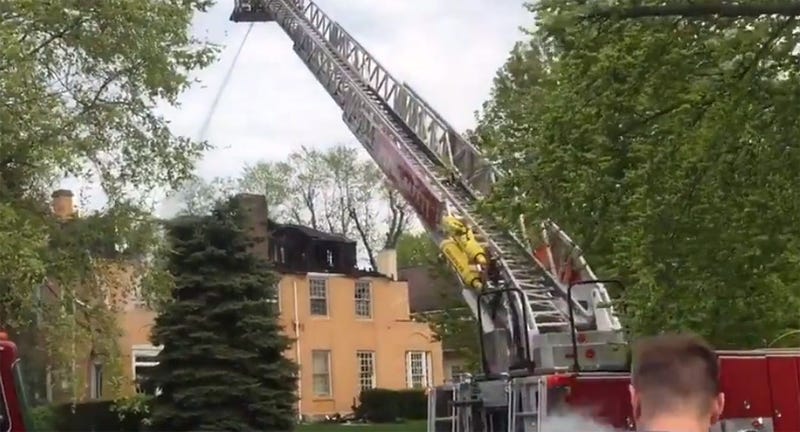 GROSSE POINTE PARK, Mich. (WWJ) - An investigation is still ongoing, but officials believe a fire that nearly destroyed a Grosse Pointe Park home on Thursday may have started because of construction crews.

The fire broke out at the three-story home on Yorkshire Street off Kercheval Thursday afternoon; and when fire crews arrived, it was already a three-alarm blaze with smoke and flames coming out of the upper level windows. Crews from Grosse Point City, Grosse Pointe Park and Grosse Pointe Farms all responded to the fire.

Fire at Grosse Pointe Park home on Yorkshire destroys the 3rd level and causes major water damage throughout the home that was under renovation. No injuries. Authorities say fire was likely started by roofing contractors. @WWJ950 LISTEN LIVE >> https://t.co/YNbPdRIKMn pic.twitter.com/4tANBIGZiQ

Grosse Pointe Park Fire Chief Stephen Poloni tells WWJ the fire was first noticed by construction workers who were working on renovations inside the home when they smelled smoke. Poloni said early investigations lead them to believe the fire was caused by roofers with torches who were sweating some pipes on the third floor.

Calvin Galloway, who was working on the renovations said he believes the home is around 100 years old.

The upper levels of the home were completely destroyed and the rest of the house sustained severe water damage.

Everyone made it out of the home safely and no injuries were reported. An elderly couple taking care of the home say the owners are in a nearby nursing home.