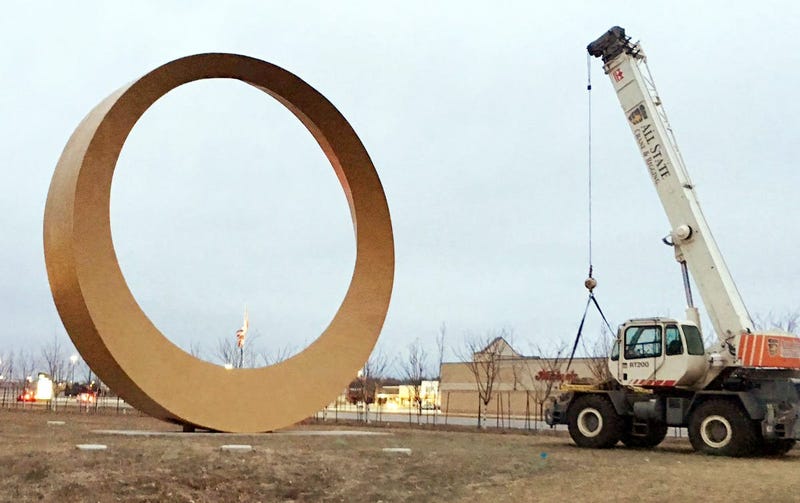 STERLING HEIGHTS (WWJ) - You're not hallucinating. A massive golden ring has indeed appeared along Hall Road in Sterling Heights.

Crews this week erected the 35-foot circular structure in the median as a part of a $1.8 million landscape improvement project, branding a stretch of M-59 as the "Golden Corridor."

The ring itself, which sits just east of Schoenherr Road, lights up at night.

The M59 Golden Corridor icon has been installed! The primary purpose of enhancing the Golden Corridor brand is to ensure the corridor remains a destination and to increase the number of visitors, shoppers and overall business development of the corridor. https://t.co/2NOrplaPL3

Kim, a Sterling Heights resident who didn't give her last name, was surprised to see it this morning.

"Uh, huh...It really looks beautiful," she told WWJ's Charlie Langton, who was out and about gauging reaction to the art. "A bunch of rings going down Hall Road? And pretty soon we won't even have Lakeside (mall) there, so that'll be nice...but we'll have rings."

Also stopping to have a look was Shawn Johnson, who called it "amazing."

"It looks nice; it makes the area look nice. I mean, Sterling Heights is doing something different," he said.

But what about the price tag? "Wow, that's a lot of money," Johnson said. "I mean, we can actually start doing something to these buildings around here and make it look a little bit better."

The ring's installation comes as the Michigan Department of Transportation is nearing completion of a $55 million roadway improvement project within the corridor.

"Oh, I think it's awesome," beer truck driver Steve Doherty said. "And definitely, as a delivery driver, the fact that it's much less congested, yeah...this is definitely awesome."

Sterling Heights city officials say the ring is part of a broader effort to enhance the Golden Corridor brand, with the aim to "ensure the corridor remains a destination, and to increase the number of visitors, shoppers and overall business development of the area."

Other planned upgrades in the corridor include decorative traffic signal mast arms, monument signage and the elimination of chain link fencing.

Sterling Heights Mayor Michael Taylor said he's prepared to take some ribbing about the ring, but he stands by it as a part of bigger plans for the city's future.

Visiting the WWJ studios as part of our Mayor Monday series, Taylor talked about longterm plans for massive property where Lakeside Mall now sits, at Hall and Schoenherr.

"There's a lot still to uncover and there's going to be a long process here involved," Taylor said. "But what the city's doing is we're trying to make it as easy as possible for a new developer or a team of new developers to come in."

"...We don't build shopping malls anymore with that parking, and we'd like to see that developed with institutional uses, hospital uses, like a downtown city center with gridded streets -- and we think it could really take off," he added. "But a lot of things have to happen still, and Lakeside Mall is still hanging on. It's still viable, there are still tenants in there that are open for business; but the mall knows and the city knows that it has to evolve with the evolving shopping habits of the customers out there."

Editor's Note: This article has been updated to reflect that tne earlier reported cost of the ring also included Golden Corridor signage.