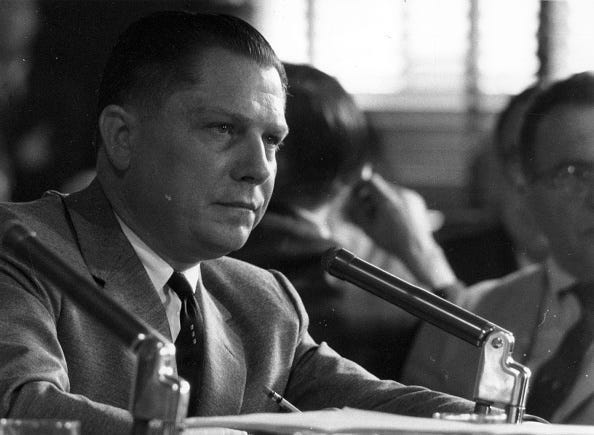 (WWJ) One of America's most iconic mysteries, and one embedded into the fabric of metro Detroit, goes like this: Who killed Jimmy Hoffa and where's his final resting place?

At the peak of his power as head of the Teamsters union, Hoffa flew into the wind, gone never to be heard from again. The 62-year-old emerged from the Red Fox restaurant in Bloomfield Hills between 2:30 and 3 p.m. on July 30, 1975.

Everything that happened to him after that is conjecture.

And yet still we search.

Another dig was carried out two weeks ago in Hillsdale, Mich., said Scott Burnstein, true crime author and investigative journalist. Nothing turned up.

"The people who knew were all select (mob) members, they were all made guys," Corbett said.

Hoffa was feuding with Anthony “Tony Pro” Provenzano, once a close friend, at the time of his death, Burnstein said. And Provenzano was related to famed mobster Tony Giacalone through marriage. Hoffa was to meet Provenzano and Giacalone when he was last seen; Both had alibis, though local mob captain Vito "Billy Jack" Giacalone lost his police surveillance team at the time in question.

Billy Giacalone was probably in the car that picked up Hoffa, Corbett said. Possibly a New York mobster was in it too, as a representative of Tony Provenzano, Carone added.

"I don't think anybody put much credence in what he had to say," Corbett said.

Since Hoffa's disappearance, Carone said, there have been microphones places in local businesses, and more, to get to the bottom of it."They never talked about the Hoffa case ... Even if there's guys who are associates or hangers on and you pick them up on recordings around the anniversaries ..."

What does that mean? "There were very few people that knew, which is surprising, and they could keep a secret," Carone said. "They never discussed it. So obviously the word was out there that this thing is over, it's done and we're not going to talk about it." Nothing. No macho BS bar talk. Nada.

A maroon 1975 Mercury Marquis, owned by Tony Giacalone's son and borrowed by Hoffa's good friend Charles O'Brien, was the only piece of evidence ever seized in the case. The car is still in the county's evidence locker since human hairs were found in the trunk that matched hair taken from Hoffa's hair brush, Burnstein said. O'Brien told investigators he had picked up fresh salmon in Giacalone's car and that would explain any blood inside.

Fishy, for sure, but these experts don't believe he was involved. "I don't think Chuckie was involved, he's not the kind of guy you want," Corbett said.

"Chuckie wasn't a tough guy either, he was incredibly unreliable," Burnstein said, adding he was known as a blowhard, a liar and a drunk.

In the wake of Hoffa's disappearance, 50 witnesses were called before a federal grand jury, but no charges were ever brought.

Dozens of digs have turned out to be a waste of time. Ranches, farms, driveways on both the east and west sides of the metro area.

"I don't know that Hoffa's body survived the ordeal that he was put through. In other words, there may not have been a body to bury," Corbett said, adding there was a banquet house called the Raleigh House at 10 Mile and Telegraph with an incinerator behind it. The gangsters liked to go there and "it certainly would have been a place where if Hoffa was disposed of  ... they could have wrapped him up in a carpet or a rug and then carted him there that afternoon and incinerated him and there wouldn't have been anything left to bury."

The Bagnasco Funeral Home is another possible source, some believe. Trusted mobster Tony Zerilli pointed to a farm once owned by the Tocco family. A mob-connected owner of a trucking company claimed he transported him to a landfill in New Jersey. That doesn't seem probable as going across state lines with the most sought-after missing person in the country in the back would have involved too many risks, all agreed in the Original Gangsters podcast.

Overall, it was a tight operation known to very few, high level people.

"I think they tried to keep it very low key and the circle of people who knew this are a very select few ... Anytime you involved more and more people you run the risk of somebody finding out or somebody walking about it, I think that probably anything outside the real circle of people we're talking about would be tenuous at best."

And all of them would drop dead before they would talk.

"I think, given the fact no one's really talking about it (from the inside) and the major players are deceased ... It's never going to be solved."