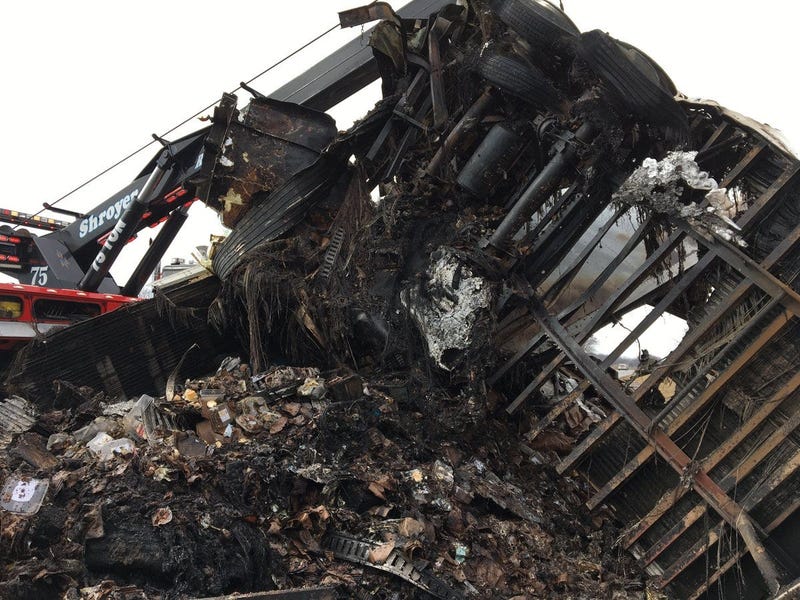 WHEATFIELD TWP. (WWJ) - A load of luscious treats went up in flames when a semi truck caught fire on I-96, between Howell and Lansing.

Michigan State Police said no one was injured in the incident at around 7:30 a.m. Thursday on the westbound side of the freeway, near Williamston Road (mile marker 119), in Ingham County's Wheatfield Township.

MSP Lt. Daren Green said the semi trailer, which was hauling baked goods from Ontario, was fully engulfed when authorities arrived. No vehicles other than the semi were involved, according to investigators.

The blaze burned muffins, cakes and pies to a crisp, Green said, but no one was injured.

(We can joke because NO ONE was injured), Today is #NationalPiDay. Troopers from the MSP Lansing Post responded to a semi-truck/trailer fire this morning on I-96. The trailer was full of baked goods, including muffins, cakes, pies, etc... Seriously, what are the odds? pic.twitter.com/RkoI0dRQIB

"The funny thing about this one is it's National Pie Day (3/14)," Green told WWJ's Sandra McNeill. "The odds of a truck full of baked goods catching on fire and being destroyed is kid of comical I guess."

Green said a preliminary investigation found that the semi's cab first caught fire, possibly due to a mechanical issue with a tire. An investigation is ongoing.

Westbound 1-96 was completely shut down for a time due to the fire and emergency response vehicles. The right lane remained closed as of 2:30 p.m., causing a miles-long backup.

Green said they hope to have the freeway cleaned up and fully back open to traffic before the afternoon rush.