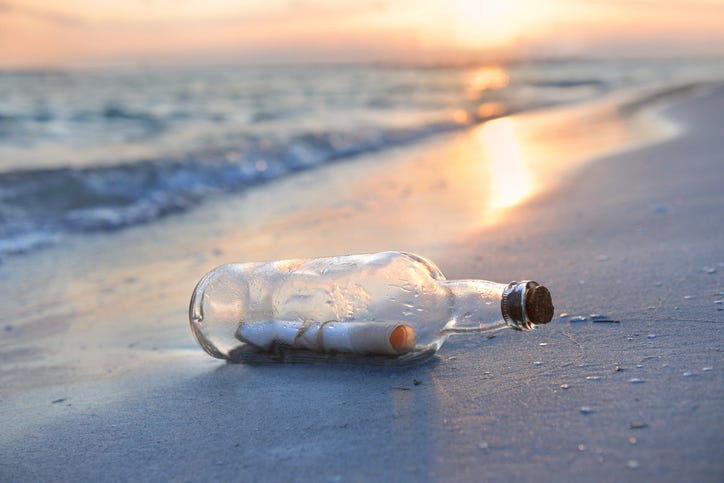 CANTON (WWJ) - A Canton woman who threw a message in a bottle into Lake Michigan 45-years ago never dreamed she would see it again. But a man found it a few years ago and was recently able to track her down.

Tina Green-Alleraat remembers when she wrote the message as an 11-year-old girl spending time with her grandparents in Traverse City in 1974.

"My grandparents had me write the letter and we sealed it in a glass vodka bottle and sealed the top with crayon wax and we drove out to Lake Michigan, way out there where we used to fish, and I threw it in the water," she said.

A Canton woman, who threw a message in a bottle in Lake Michigan 45 years ago, will get it back.  A man found it recently and will return it to her. @michnewsnetwork pic.twitter.com/3u44eQZkfu

Her message asked whoever found it to return it to her, but time passed without a response and soon it faded from Green-Alleraat's mind.

"I actually forgot about it. Back then as a kid I thought 'Oh yeah, it's probably going to travel across the world,' you know, I thought something cool would have come from it," she said. "But as soon as he notified me that he found it I remembered doing it."

Green-Alleraat said a man found the message a few years ago under three feet of sand a few miles from where she threw it in the lake. He held onto the message until he recently tracked Green-Alleraat down on Facebook. She said the two plan to meet but until then, he's going to send her message back in the mail.

"It's just such a treasure," she said. "It's memories of my grandparents up there. And it's changed so much, that area is just so busy now. So it's just memories of when it was peaceful and quiet."

Green-Alleraat says her brother sent out a message in a bottle, too, but his hasn't been found -- yet.