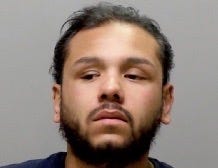 In the movies that scene would end with the hero sailing over his obstacle -- in this case a bridge -- and landing smugly on the other side. He would smile at the camera, maybe even give a thumbs-up.

In reality, a 26-year-old Allen Park man, identified by police as Miguel Gomez, blew out all four tires and crashed into a gate when he tried to cross the Fort Street drawbridge at about 7 p.m. Wednesday just as it was rising. He allegedly slammed on the accelerator to try to jump the bridge.

"I looked, I said, 'No he ain’t,' " drawbridge operator Andre Locke said to WDIV-TV. "Over he went, blew out all four of his tires, and then he crashed into the other gate."

Driver arrested after vehicle crash in attempt to jump over drawbridge on Detroit’s West Side. Detroit police called it Dukes of Hazard; the bridge operator called it The Blues Brothers 😂

But what’s this about youth getting high from sniffing gas from whipped cream dispensers? pic.twitter.com/pYiveUfhpM

WDIV reports the man is under suspicion of driving under the influence of "whippets," which is inhaling the dregs of a whipped cream can to get high off the nitrous oxide