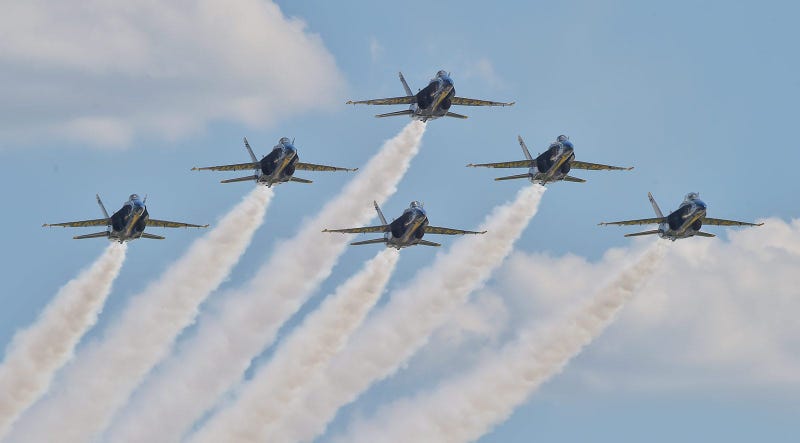 (WWJ) The Blue Angels flyover that was planned for Detroit on Wednesday has been canceled, but will be rescheduled.

The new date hasn't yet been determined, officials said on Tuesday.

Although they didn't specify that that weather is the reason, there are thunderstorms in the forecast for the metro Detroit area and the across the Midwest, according to AccuWeather.

The 'Fly Over Detroit' was planned as a way to salute and recognize healthcare workers, first responders, and other essential personnel amid the coronavirus pandemic, the Navy said, in announcing the program called "America Strong."

The Blue Angels as well as the Thunderbirds demonstration team will be flying over areas of the country hardest hit by COVID-19, as both joint and individual team flights, every one-to-two days until mid-May.

“We’re excited to fly over cities across America as our way of saying thanks to the healthcare workers, first responders, and all the people who selflessly run into the breach working to keep America strong,” said Gen. Dave Goldfein, Chief of Staff of the Air Force, and Adm. Michael Gilday, Chief of Naval Operations. “This is also our way of showing that we are all in this together and that America’s spirit will prevail.”

The Blue Angels, based at Naval Air Station Pensacola, Florida, and Thunderbirds, based at Nellis Air Force Base, Las Vegas, typically fly at more than 30 air shows each year to demonstrate American military aviation. This year, both teams have been forced to cancel many performances in response to Department of Defense direction resulting from the COVID-19 outbreak.

"America Strong" also fulfills critical training requirements for both teams, officials say, as all pilots must execute a minimum number of flight hours to maintain proficiency. These flyovers will incur no additional cost to taxpayers, according to the Navy.

Stay with WWJ Newsradio 950 for the latest updates.