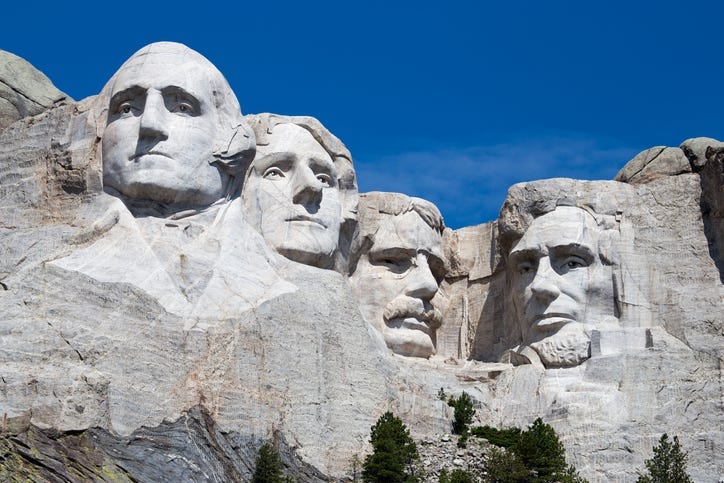 (WWJ/AP) A metro Detroiter who was caught climbing Mount Rushmore and later slipped down a cliff has been fined $1,500.

Court documents show that dispatchers on Aug. 19 reported “a climber being seen on Mt. Rushmore on the top of George Washington’s head” was creating a “hazardous condition” by climbing an unsafe slope, falling and forcing law enforcement to "chase him."

Ayman Doppke, of Dearborn, said he figured rangers were going to try to catch him so he decided to go down the steepest and most dangerous route in order to escape, according a probable cause document signed by a federal law enforcement officer.

He fell 25 feet and tumbled down a loose gravel slope. He was arrested after he was treated by a medic but declined to be taken to the hospital. ​

This is the second Michigan adventurer busted scaling the monument in recent years. In the summer of 2018, 19-year-old Zachary Schossau of South Rockwood, in Monroe County, was caught in the act and taken into custody by park rangers.

The U.S. Attorney’s Office and the National Park Service reminded and cautioned the public that climbing Mount Rushmore is a violation of the law, and offenders will be prosecuted.

“Please be respectful and stay off the Rushmore Memorial,” Parsons said, at the time. “The terrain is hazardous, and it ends in federal court.”

Completed in 1941, the memorial in the Black Hills of South Dakota features the features of President George Washington, Thomas Jefferson, Abraham Lincoln and Theodore Roosevelt sculpted into the granite mountain face. The carving took about 14 years, with each face measuring about 60 feet in height.